RTG casinos slots released Caesar’s Empire over a decade ago, and it does show in more than one way. The game is quite old and we don’t really suggest playing it for any other reason than to feed feelings of nostalgia, and perhaps a few rounds here and there with play money to familiarise yourself of what is a piece of casino history. That’s not to say the game is without any worth when it comes to playing. It still very much functions like a slot should do, and there’s even free spins, wilds and scatters for the player to lust after. It’s the small things like graphics and sounds which show signs of aging.

Caesar’s Empire at a glance

As is the case with most slots the small tier wins are presented by symbols familiar from a deck of cards, from ace to nice. These are the most common symbols on the screen and the payouts from the combinations are rather small, topping at around 125 coins per winning line. Of course, if Caesar appears as a wild substituting for any symbol these wins are tripled, and become quite formidable as well.

The remaining symbols are the vestiges of Roman power, such as the shield and sword or the helmet of a centurion, and of course Cleopatra who at the time played a part in the larger drama that surrounded the Empire. The Colosseum symbol in turn functions as a scatter, while Caesar himself is the wild or in other words substitute symbol. Both of these two are needed to launch the bonus game with free spins.

Bonus game with free spins and a random jackpot

Once you land a coliseum on reel five and a Caesar symbol anywhere a bonus game is launched with ten free spins. For the duration of this all prizes are doubled, and Caesar himself might add to the pot by appearing on the fifth reel, and in addition every time he does five more free spins are added to the player. The coliseum symbol itself is changed to either Cleopatra or Caesar during the free spins. All games are played at the same bet price that triggered the bonus.

The jackpot on offer is a progressive one, and it is is rewarded at random. The maximum payout is limited at 1.5% of the total return to player. None of this really matters as though the game was once a very popular slot it has now lost much of its appeal, and the issue with progressive jackpots is that once the players disappear the jackpot stops growing, which is kind of a self feeding circle. At the moment of writing this article the jackpot was around 5000 USD. For a progressive jackpot that is quite a small sum. 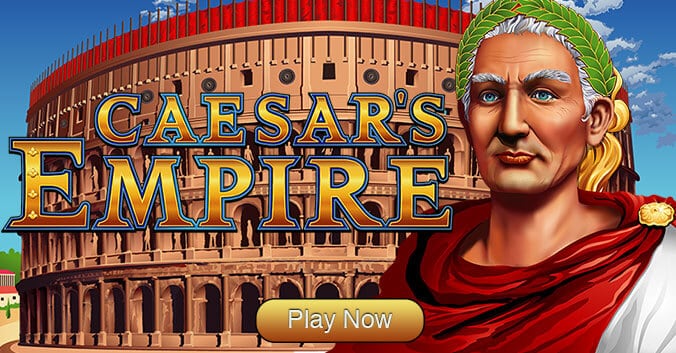 Caesar’s Empire slot was an excellent game when it came out, offering free spins, jackpots improved graphics and excellent game play. Though on some level these attractions remain true the sad fact is that time has driven past the game. The graphics are unimpressive, the sound effects you will turn off as soon as you start, the jackpot is too small and the game play is nothing new (like it was at the time). One positive thing is that the game dishes out quite a lot of wins, even if they are sometimes small. If you combine that with a bit of nostalgia you might find that the slot is still quite enjoyable. Playing through a few rounds now and then for entertainments sake is something the game still shines with. I would very much suggest trying with play money first though, or moving onto newer slots.