So Euro 2016 is about to start tonight and it seems that every man and his dog is releasing a football related slot ready to cash in on the summer football fever.

Unfortunately in most cases it seems like the slot designers completely forgot about Euro 2016 until a few weeks ago and have basically gone to their default settings for a basic generic slot and rushed some football symbols and player graphics and decided “yeah that will do… the casino players are all idiots, as long as it has a football in there somewhere they will fall for it. Exciting bonus features? Nah we can just steal some graphics from Mousebreaker dot com and that will do them.”

A big football tournament happens every two years. Meaning the slot designers have two years to come up with something brilliant. I have also mentioned this before but it appears they don’t have any focus groups to test their slots out while in development because they sure as hell don’t know what the players want. Epic fails all round.

Ok let’s start the show reel of these wonderful innovative slots (spoiler alert, they are not all bad and all of them do have their plus points)…..

NetEnt are getting lazy. That is glaringly obvious. And Football Champions Cup is no exception. The penalty shootout in this slot would be interesting if the prizes on offer were not generally so low. You have to get 4 or 5 scatters to really make this feature worthwhile. The cup free spins round could have been entertaining as well but this seems rushed and not properly tested.

NetEnt really scored an own goal with this slot. On the plus side it looks like they did correct a mistake upon release where they called Extra Time – Overtime. But on the whole this is a dreary and dull offering from a company that should have had the online slot market sewn up but are rapidly being caught up now.

The only plus point for this slot would be if you actually manage to win the free spins cup… that should at least provide a decent win. Though I have to say I’ve never done better than 4th place so far.

Here is the perfect example of lazy. Yggdrasil have been quite innovative recently but Bicicleta is weak. They have clearly recycled the mechanics of some of their other slots and slapped on a kind of footbally free spins round. All in all this is a really really dull and tiresome slot with no thrills in the main base game at all.

On their official Youtube channel they describe this as a medium variance slot but from playing it for hours on end I would be hoping for high variance. The free spins round looks like it can throw up the occasional monster win but in general it is a money eater. Over a number of hours I only once had a 100x bet win so I would be hoping for the potential of some wins in the 1000’s x bet? Definitely a slot to auto play but I do worry about the pay back returns.

Here is one that obviously has been in development for a long time. I haven’t been a fan of Genesis Gaming slots in the main but this is one that is really pushing the boat out. They have clearly thought long and hard about the game play and made it feature packed and entertaining. This is definitely one football slot that should appeal to the casual player. Well done Genesis.

Stakelogic if you don’t know them come under the hood of Novomatic and Greentube. Now this slot was actually released back in the first quarter of 2016 but I thought I’d include it anyway. It is a strange one as aside from featuring 4 famous footballers and a football icon, it actually has pretty much nothing to do with football at all.

That being said, this is an entertaining enough game and really does look very nice indeed. Well worth giving a try to.

I could reel of a couple of dozen football related online slots. But I’ll try to keep it to a minimum.

Endorphina – Football: This is one of Endorphina’s earlier slots and you can tell. Very basic game play with a bog standard free spins round with a multiplier.

Microgaming – Football Star: Everyone should know this slot by now. It might be just another clone of Break Away but it does have it’s merits all the same. The slot game it is based on is great so it is well worth a punt.

Microgaming – Shoot!: A slot machine based on an 80’s football magazine (I had an article published in it once when I was about ten… completely irrelevant information for you but I had to throw that one in for my own childhood ego’s sake, I was very proud of it at the time). The Shoot! online slot came out a couple of years ago now but you will find some casinos actively plugging it again to cash in on Euro 2016 fever.

This is actually a really cool slot for football fans so I’ll throw out a little video for you in case you don’t know it yet:

Playtech – Football Rules: Here is a bit of an old school slot which was decent at the time but feels rather dated these days.

Playtech – Top Trumps Football Legends: If you are of a certain generation you will remember the Top Trumps cards. Well a few years ago Playtech decided to bring them to the online slot world with relative success. For football fans of an older generation I think you will enjoy this slot quite a lot. I know I still give it a few spins even now!

Playtech –Benchwarmers Football Girls: Now here is many red blooded males’ favourite football related slot. 5 scantily clad models doing photo shoots, 2 bonus features, one of which can throw up some monster wins. This slot is still a recipe for success despite it’s relative age. The RTP could be a bit more generous but you can still clean this slot out if you hit it at the right time. 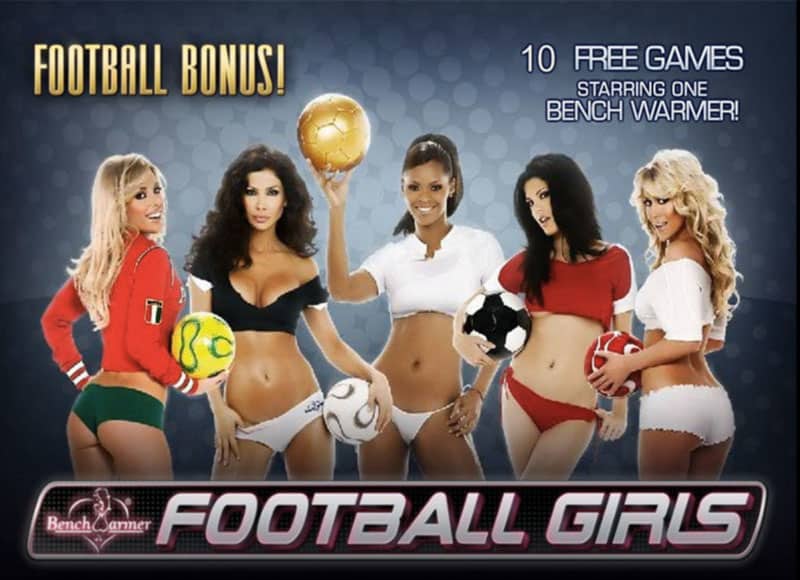 There’s far too many more football online slots out there to mention in this one post but for this summer let the 4 new ones I’ve mentioned be a lesson to all slot makers. Take your time and develop something unique and entertaining. Genesis had the right idea with their slot and that is one which will stand the test of time. The weak offerings from NetEnt and Yggdrasil are going to be instantly forgotten even before Euro 2016 has even finished. A complete waste of time. We want good slots. We are not going to play and old drivel just for the sake of it, there’s plenty of competition out there for our hard earned cash so it is a waste of time bringing us generic tripe!