Deal or No Deal Slots

Deal or No Deal was one of the most popular television gameshows when it aired in the UK, and it has since become one of the most popular slot series. With games developed by both Endemol and Blueprint Gaming, there are four major slots to choose from, as well as countless instant win games from Playtech and other developers. In this piece, we’re going to weigh up the four main Deal or No Deal slots, and see which one suits your needs best.

Deal or No Deal: Dream Factory

The newest Deal or No Deal slot to hit online casinos, this Endemol released slot machine is kind of a swan song to gameshow TV series, which recently ended. Deal or No Deal: Dream Factory offers 5 reels of action, with 20 paylines spread over them. Wagers typically cost between 20p and £100 per spin, with top prizes capped at around 25x your total bet.

Wilds appear as question marks and can replace all other symbols save for the telephone bonus symbol. The slot features two randomly triggered bonuses, namely a mystery symbol win feature, and the ability to bag random wilds.

Also worked into the game’s design after several added goodies offered by landing 3 scatters on the reels. A Deal or No Deal style bonus will let you choose a box to land the Super Deal bonus, which allows you to play the real Deal or No Deal game to win prizes, the Walk of Wealth, which is effectively a click and win game worth up to 150x your total bet, or the Red Mist bonus, which promises a free spins feature with an extra wild. You could also win an instant cash prize, or the Play It Again feature, which offers free spins and a mini Deal or No Deal game. 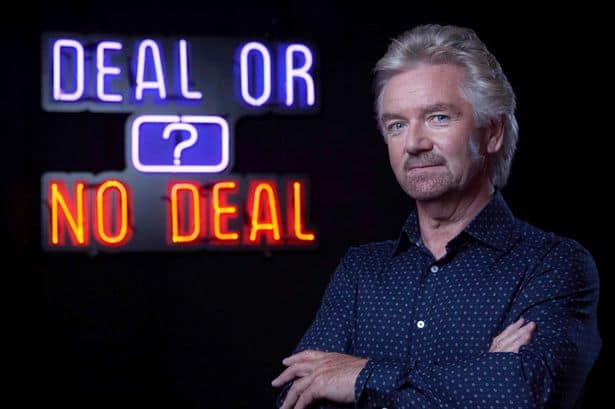 Deal or No Deal: What’s in your Box?

The only major Deal or No Deal slot which has not been produced by Endemol is Deal or No Deal: What’s in your Box? This game offers a flashier look at the series, with famous items such as teacups, journals and letters present in the game, as well as the telephone. What’s in your Box offers 5 reels and 20 lines, and with 3 progressive prizes to win, there’s a lot to play for. Wagers stem from 20p per spin, up to £200 a game.

Wild symbols appear as black phones, and they can replace all other icons in the game save for bonus boxes. Those appear as scatters and can trigger the What in your Box bonus when 3 or appear anywhere on the reels. The What’s in your Box bonus allows players to select a box in an instant win game. They will land 1 of 5 bonuses with this feature. Also, at any point in the game, a Banker’s Bonus Spin feature may be randomly triggered which can offer mystery symbols, random wilds, colossal symbols, guaranteed winning spins, a bonus round, or a five-of-a-kind combo.

The five main (scatter triggered) bonuses include Go all the Way, Trail of Wealth, Seal or Success free spins, Power Play free spins and a game of Deal or No Deal itself.

Deal or No Deal: The Banker’s Riches

One of the very first Deal or No Deal slots released, this Endemol game offers the same 5-reel, 20-line platform as the others. It does, however, offer a larger 2,500-coin non-progressive prize, and boasts a progressive pot. Playable for as little as 1p per line per spin and as much as £100 per spin, this is one of the best-paying of the Deal or No Deal slots, with an RTP rate of 95.06%.

The Deal or No Deal logo acts as a wild, whilst the scatter appears as the black phone. Landing that scatter 3 or more times will trigger one out of 3 bonus rounds. Those rounds include a Jackpot Bonus in which players could potentially land a progressive by making their way through the boxes just like in the game show. Alternatively, the Red Banker bonus offers free spins until a banker icon appears on the third reel, whilst The Banker’s Best Offer bonus provides players with up to 10 different prizes, and players can accept or reject as they see fit.

Deal or No Deal: World Slot

This Endemol game is based more on the American show than the British one, but it is more of the same. Once again there are 20 lines spread over the games 5 reels, with wagers costing between 1p per line per spin and £200 a spin in all. The features in this game are almost identical to The Banker’s Riches, the only differences being the 2x multiplier added to your wins and the fact that the progressive prizes tend to be a little richer. Aside from this, though, even the RTP rate in Deal or No Deal: World Slot is identical. The imagery is quite different, though, with this game opting for a more golden look than the traditional colours of the series.

Deal or no deal casino is a cheap and nasty white label casino trying to cash in on a name. That name is really all it has going for it. Running on a platform black listed at many reputable casino portals and with a very hit and miss website in terms of reliability and design. There really is no good reason to play here when there are far better casinos out there!

HOW DO YOU BECOME A VIP?

There are two stages to our VIP scheme: VIP and Platinum VIP. Each level depends on how much you deposit and wager each week, and you can achieve the first level of VIP status as a result of your gameplay. You’ll be notified when you become a VIP, whilst Platinum VIPs need a special invitation.

At either level, you can expect:

To maintain your VIP status, and your weekly benefits (bonus cashback for VIPs and REAL cashback for Platinum VIPs), you’ll need to keep up your legendary gameplay. If you do, you’ll still be in the loop with all the latest VIP promotions. Previous prizes have included:

And if all this isn’t enough for you, VIPs also receive extra attention and support via exclusive VIP-only email addresses/phone lines or a dedicated Account Manager. Our VIP Support Team is specially trained, so you’ll receive the best, consistent VIP treatment as soon as you’ve become a member of Deal or No Deal royalty.

If you have any questions or simply want to find out more about being a VIP, please do not hesitate to contact us on 01590 700039 or via email at