We are always hunting down stories about gambling and fruit machine addiction stories and here is another one we recently found which is a very common story in this day and age.

A mother-of-three who lost her home and her family after gambling away £250,000 on fruit machines has finally managed to beat her addiction.

Tara Mooney, 46, who lives in Frome, Somerset, spent up to 12 hours a day putting every penny she earned as a bus driver into the slots.

However she says she was only able to quit her decade-long habit when she was sacked from her job after missing too many shifts. 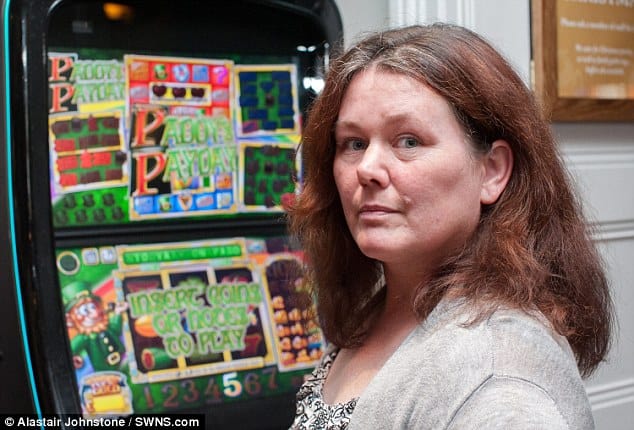 ‘It’s ridiculous when you think of it but I was in the grip of a fierce addiction.’

Speaking in a video to the Press and Journal, Tara explained how she first got into gambling by playing bingo.

She said: ‘I was in denial for many years and lost almost everything. I actually started off by playing bingo, going to Gala, and when you have a win you feel all excited and when they have the intervals – they tend to have breaks – so you go and play on the slot machines or party bingo.

‘And I started enjoying the fruit machines but I didn’t realise how it was affecting me. And when I was bus driving every dinner break I had I was going into Corals, any kind of bookies that was nearby so I could get back to work on time.’

However the bus driver, who was paid weekly, quickly became hooked and ended up wasting her entire £500 after-tax wages on the habit.

She would spend all day on the machines at work or at her local pub, and even started playing online slot machines in a bid to feed her addiction.

She said: ‘There was one in the canteen at work, so I would just put a couple of quid in.

‘But that was never enough and it quickly snowballed into a full-blown addiction. It was all I could think about.

‘I’d have good days, where I won money, but it all went back into the machines. Every penny I had went on those damned things.

‘I was so hooked that if I pulled over at a motorway service station, I would end up playing the machines there for hours – it tore my family apart.’

Tara admits she was ‘selfish’ and that it eventually led to the breakdown of her marriage. She was so out of control with her habit she got behind on her mortgage and lost her house.

Her sons Gary, now 24, and Daniel, 21, chose to move to Peterborough in the midst of her problems.

While her son Alfie, 26, hated her gambling problem he has since forgiven her and the pair now live together.

She said: ‘I was hooked. All I could think about was putting more money down the slots.

‘My husband at the time realised I had a problem, but he was so stuck working to pay for everything else in our life that he couldn’t help me. He couldn’t keep up with the bills and we rowed and he left.

‘Sadly, I’m not surprised. I realise now what a selfish person I was and I know I’ve ruined my life.

At one point Tara admits she took a float of money from work to fund her habit, but she quickly went to her boss and told him everything.

According to Tara, he was initially ‘very understanding’ and did not want to let her go because she was a good worker. However she eventually got the sack after missing too many shifts.

Speaking about how she felt at her lowest, she said: It affects you and it gets you depressed. It isolates you, you’re stuck in that circle.’

Eventually Tara found a hobby and started self-publishing books in a bid to overcome her addiction. She also went out more and socialised with friends, but admits she was ashamed of her problem.

She said: ‘The hardest thing was telling my loved ones about being addicted to gambling because I thought they were going to be very judgmental.’

Tara claims that parts of her family were ‘not understanding at all’ but she was determined to turn her life around.

The mother-of-three has finally managed to kick her habit and get her life back on track, although she allows herself to play the lottery every week.

She said: ‘I feel guilty about what I did, but these things are so addictive, it took over my life.

‘Getting sacked was the best thing that happened to me, it meant I couldn’t gamble. I don’t gamble any more, apart from playing the lottery.’