The Charlie Chance In Hell To Pay slot is a new release from Play’n Go that somehow manages to put together two classic genres into a perfect mixture that makes a game anyone could love. Charlie is based on a character that many will remember from plenty of silent movies. The game itself also takes some queues from the era with a high definition but black and white background behind the classically designed fruit type slot machine.

Charlie Chance In Hell To Pay is a classic three-reel, three-row slot machine that pays out on five pay lines. On the reels, you’ll find wild symbols, bars, cherries, bells, apples and lemons, but unlike most other video slots, there are no lucky sevens here. Instead, you’ll run across some “666” symbols

There are seven regular symbols on the reels plus five special symbols to help bring in those ever-important bonuses. Higher paying symbols include the wild symbol, golden bells, 666, and the double bar symbols. Lower paying symbols all include various types of fruit. You’ll need to match three of any of them (or a combination with wild symbols) on one of the five pay lines in order to pull in a prize. 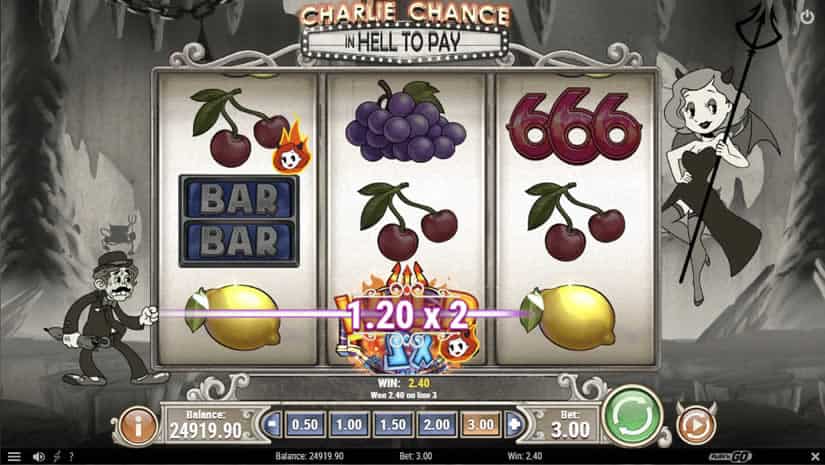 All of the special features on this game are triggered by special symbols appearing on the reels. There is a small female devil whose face can show up on any symbol on the reels, and she is the scatter symbol. When you see her face three times, anywhere on the reels, one of the bonus features will start.

The instant prize is just what it says. You’ll be given a random award of up to ten times your bet.

A respin is awarded with a win multiplier of either 2x, 3x, or 25x!

A respins is awarded, but there are up to nine extra wilds added randomly to the reels.

With this respin, the second reel will be wild and the third reel will nudge until you end up with a winning combination on a payline.

You’ll be awarded 8 free spins initially, but they can be retriggered and you may find yourself winning some other bonuses before the feature finishes, too.“