The House of Doom slot from Play’n Go is a unique and unusual blend of dark heavy metal music and pure video slot fun. It’s a new five reel slot released June 2018, with a fixed ten pay line payout structure. The reels are adorned with detailed symbols including crosses, pentagrams, the skull of a horned beast and more. There are also several wonderfully evil bonus features to keep things moving.

What really makes House of Doom slot stand out, though, is that it doesn’t just take and use generic heavy metal icons or cheap guitar riffs to put together a standard, themed slot. Aside from the impressive visuals on this slot, the soundtrack is actually a full song composed by veteran Swedish heavy metal band Candlemass. The game’s developers and Candlemass worked together to make sure the slot’s theme and the song matched up perfectly. Candlemass will even be releasing the track, aptly titled House of Doom, as a single.

Players have the option of betting anywhere from €.10 to €100.00 per spin on this monster slot. With the chance to win up to 2500 times your bet, that gives players the opportunity to win up to €250,000 in a single spin playing the maximum wager.

Yes – Why To Play House Of Doom Slot

The House of Doom slot has several different bonus features designed to keep your bankroll rocking and your head banging as you thrash your way around the reels in search of big jackpots.

The Hellgate randomly highlights one of the five reels on each spin. If a wild symbol stops on the highlighted reel, it expands to fill the whole reel.

During Doom Spins (see below) between two and five reels will be highlighted. Both wild symbols and Wild House of Doom scatter symbols will expand on these reels.

Maybe doom spins isn’t the best name for this feature, because you’re more likely to feel excited than doomed. When you land three House of Doom symbols on the reels, you’ll be awarded ten free doom spins.

During doom spins, the House of Doom scatter symbol becomes wild. In addition, when three or more wild House of Doom symbols land on the reels, the player will be awarded one more additional free spin for each symbol that lands. 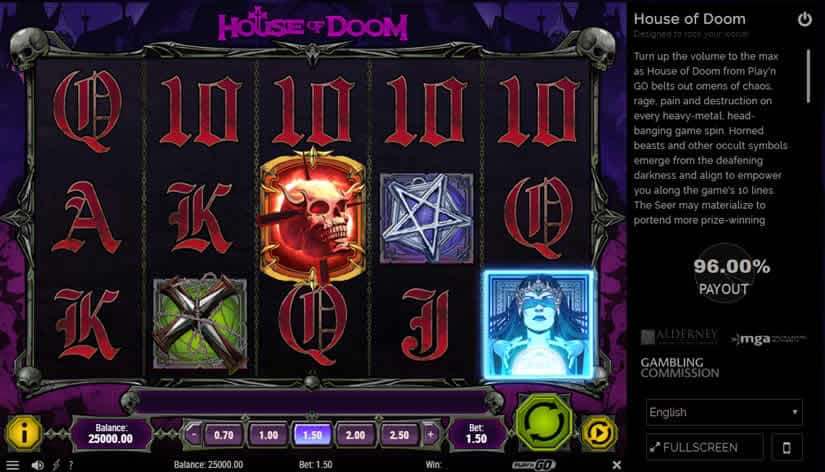 Skulls Of The Abyss

Landing three or more scatter symbols (flaming, horned skulls) will take you to the Skulls of the Abyss mini-game. You’ll be presented with fifteen skulls. Pick carefully to get rewards like prize multipliers up to 20x your bet and free doom spins.

This one is sure to be popular at any online casino that offers video slots by Play’n Go. There were a thousand ways this could have gone wrong and turned into a horrible, corny game that didn’t do justice to heavy metal music or slots. Lucky for us, Play’n Go absolutely nailed it.

If you’re a fan of heavy metal, and especially a fan of Candlemass, you’re going to love this slot. House of Doom puts together some great slot features with exceptionally well done heavy metal imagery and music to make something that doesn’t just stand out from the competition, it tramples and crushes the competition with fist pumping, head banging action.