The Quest To The West slot from Betsoft might not be exactly what you’d expect just from hearing the name. This one is no western. It’s actually an Asian themed slot full of characters making their own quest to get to the west and collect the riches that have been uncovered there. Help them on their way and a share of those riches will be yours.

The Asian theme of Quest to the West is elegant, but simple. There are no over-the-top animated characters and you can see that most of the design effort went into just making the playfield look good and the game itself play well. There aren’t a lot of bells and whistles, but there is some great, exciting slots action that true enthusiasts are sure to love. It’s surely going to be a welcome release at those special casinos where the US and Australian players can get into to make some spins, too.

There is also a special monkey king symbol who serves as a wild and also has a few tricks that he gets up to that will help you put some extra cash in your pockets as you play.

Setting bets on the Quest To The West Slot is quick and easy. Like most Betsoft games these days, all you have to to is pick the amount you’d like to play on each spin. There are 20 preset amounts to pick from. You can play for a minimum of £.02 up to a maximum of £80.

Play the Quest to West Slot At Betsoft Casinos

Yes – Why To Play The Quest To The West Slot 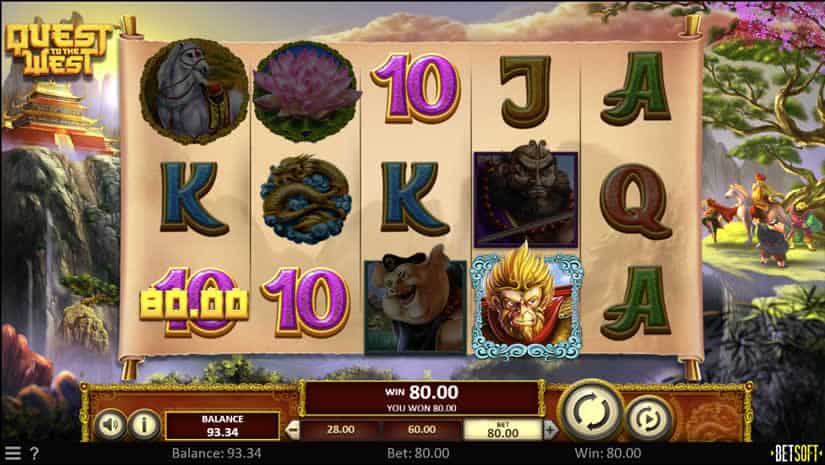 All the bonus features of the Quest To The West slot are based around the elusive (and rather creepy looping) monkey king. If either one or two monkey king symbols stop on the reels, they will behave as wild symbols.

What’s more, whenever a new monkey king lands on the reels during one of the respins, he will become part of those that must move off the screen before the feature ends, so it’s possible to rack quite a lot of free spins with quite a lot of wild symbols floating around.