Looking for more information about the Rick and Morty Megaways slot? First of all, you should know that Blueprint Gaming casinos are available worldwide. Stay with me while we go over the details of this new Megaways videoslot.

The highly popular Adult Swim show now has its video slot version, thanks to Blueprint Gaming! The mad professor Rick, and his good-hearted grandson Morty are going on a serie of intergalactic and inter-dimensional adventures, where players can land fantastic payouts of up to 50,000 times the bet.

Apart from boasting graphics from the actual cartoon, the 2020 release is also packed with interesting and rewarding additional features gamers can benefit from. There is the Megaways game engine, cascading reels, mystery symbols and three types of free spins features.

Despite the fact that the Rick and Morty Megaways video slot may seem a bit confusing at the very beginning, you will understand how everything functions in this inter-dimensional adventure after a couple of spins. Rick and Morty Megaways slot features 6 reels. Up to 7 symbols can appear in a single reel. There is also the seventh reel lying over the reel grid, displaying four different icons, which is quite common for the Megaways game engine.

Apart from Rick and Morty, you will find green and blue crystals, all of them acting as high-paying symbols, while playing cards represent low-value icons. Also, the Vindicators crew will appear during one of the free spins options. Finally, we have the Wild and the Scatter, as well as the Mystery Symbol, which changes into one of the regular icons when appearing on the reels.

Those of you who had the pleasure of watching the TV show will certainly appreciate the overall visual appearance because Blueprint Gaming made sure that the graphics in the game are completely the same as the ones from the cartoon. Even the soundtrack fits the theme perfectly, and from time to time you will have a difficult time discerning whether you are spinning the reels or watching the show.

Wagering & Payout in the Rick and Morty Megaways slot

As we have mentioned in the very beginning, the maximum possible payout players can expect in the 2020 release is set at 50,000 times the bet, which is quite nice. The game pays left to right, starting from the leftmost reel, with three of a kind being the minimum for landing wins. Only Rick pays even for two of a kind. Thanks to cascading reels, winning symbols are removed and new ones appear, hopefully, to create a new winning combo. Betting starts at £0.10, and the biggest wager cannot go over £10 per single spin.

No Bonus Casino
Review Get Bonus
5

Yes – Why To Play Rick and Morty Megaways Slot

Spinners can really enjoy an array of extra features in Rick and Morty Megaways. The Megaways game engine will help you get more ways to win, up to 117,649. Cascading reels are here to get you more winning combinations in a single spin, with the removal of winning icons and making room for new symbols to appear. The Scatter is there to help you trigger the Free Spins feature, you just need to land four or more Bonus Scatters to trigger it. 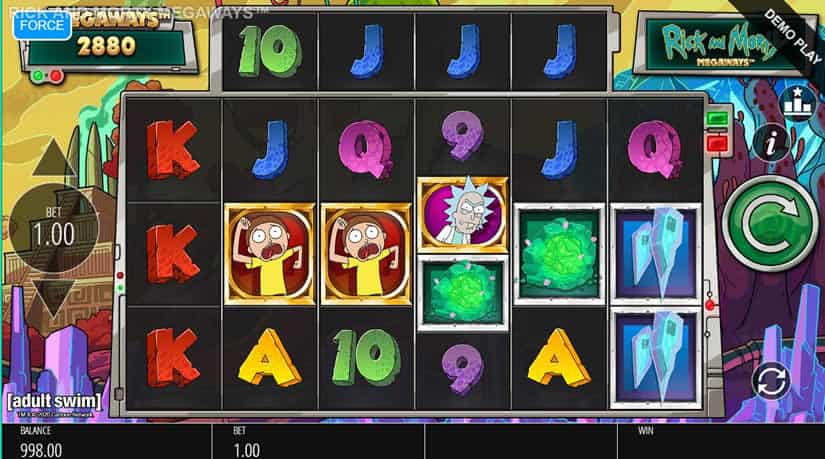 Once the feature is triggered, three options are on the table, gamers can end up with 5 to 50 freebies, depending on the number of Scatters landed. If you get Pickle Rick Free Spins, you get an increasing win multiplier, which starts at 1x and goes up by 1x after every cascade win.

Pick Federation Wilds feature and you will turn the 4 middle reels into the Wild Zone. Land same symbols in the extra reel on the top and in the reel directly under the symbol in the top reel, and it will turn Wild. Land a Wild in the top reel and the entire reel underneath will become a Wild reel. Every Wild reel will come with a random win multiplier, which can go up to 5x.

The Vindicators Free Spins feature introduces the Vindicators gang on the left side of the reels. Each Vindicator has a certain value and a golden badge with its image appears on the reels. Also, badges with instant prizes will appear. The trick is to land a V symbol in the top reel while landing golden badges on the reel grid. Once that happen, all badges will stick around while a respin is performed. Respins continue until there are no more new badges landing on the reels. After that, all values of the badges are collected to deliver a win to the player. Get more V icons to double, triple or quadruple your wins.

Finally, we have the Mystery Spins feature. Once you get tired of waiting for the Bonus Scatters to trigger the feature, you can buy it for a certain price, spin the Wheel and get a random number of freebies, while you also randomly get one of the three free spins features on the offer.