The Hive slot, from Betsoft, takes some interesting liberties with the traditional slot machine mechanics. As you might have guessed from the name, this slot is based on a beehive. The details are done extremely well and the designers have figured out several ways to work in some extra bonuses that, really, can go off at any time, but they will come and go as you play.

The reels are set up in a hexagonal shape, going from left to right, you have rows in a 3-4-5-4-3 layout. There are 30 pay lines in total on The Hive. The game will pay out both ways among those that align both horizontally and diagonally, which gives a bit of something extra that don’t you see on your average slot machine.

Getting in on the action is easy. Just pick one of the preset wager amounts, which range from £.10 all the way up to £90 per spin.

Yes – Why To Play The Hive Slot

No – Why Not Play 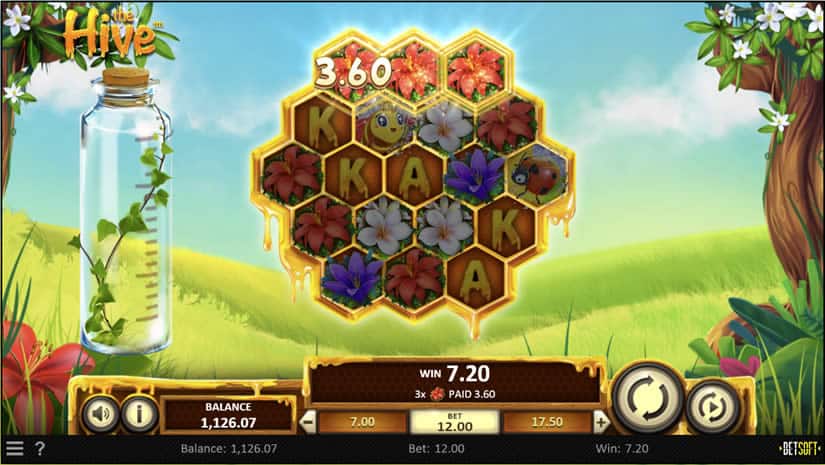 The bonus features on this slot all come from, as you might expect, the bees. There are three different types of bees that can appear at random around the hive. Each of them will do their own thing to help improve your wins. Bees will randomly appear at different spots around the hive and then move one spot clockwise with each spin until they randomly disappear.

The Queen bee will summon a group of other bees around the hive. This, of course, means that if each bee can give a bonus, you’re going to have plenty of chances to get a bonus out of her appearance.

When the drones finally fill the honey meter, you’ll be taken to free spins, of which you’ll get five.

When a winning combination lines up with a worker bee, That bee will grant a multiplier bonus to that line win. The bonus will be worth the number of worker bees present on the screen plus one.