With all the uncertainty constantly surrounding poker it can safely be said that one thing which will always be prevalent within poker is rake.

Let’s start off but looking at what rake actually is.

So now you know what rake is and why it’s needed. However, you may be wondering why you should even care about it. It’s just a necessary evil of poker which everyone has to deal with right?

Well the truth is rake changes a lot of things. We’re in 2016 and it’s without question that the games are getting tougher. Rake is an important aspect of your income which I think not enough people are looking at currently. I thought an appropriate thing to delve into in this article which would aid both new and more experience players is to assess some sites, look at their rake, look at their “rakeback” and cast some light on how you should be making your decisions based upon rake.

So let’s pick three sites which are fairly prevalent in the current online poker climate. We’ll start by looking at cash game rake (I’ll move onto to tournaments later in the article). Even if you’re a tournament player and have no aspirations of playing cash any time soon I’d still recommend you to read the entire article as it will bring up some concepts about rake which you may not of previously considered. 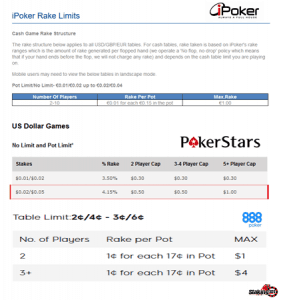 So in the graphic above we have 3 sites, iPoker, PokerStars and 888. I’ll quickly run through all the relevant info on the graphic for any of you that are confused.

So we have number of players, as you can see for some sites the rake changes based on how many players are at the table.

We also have a Cap (Also referred to as MAX or Max Rake) which is the maximum amount of rake a site can take in a hand at that given stake.

As you’d expect Rake per Pot (AKA Rake %) is the amount the site takes per pot.

If you’ve astutely read the blurb in the iPoker picture you’d see they mention the saying “No flop, No drop”. If the action doesn’t reach a flop, no rake is taken. This is common practice in pretty much any online and live poker room.
So let’s actually crunch some numbers. In order to not make things too complicated will be using one fixed example to compare all the sites with. Taking a blind stab at the potential demographic reading this I think the most optimal stake to pick (if you haven’t guessed from the picture) is 5nl 6 Max Cash.

This is where many start their journey with cash games and I think it’s an appropriate place to cross compare sites as the 5nl games differ greatly depending on the site.

Again to reduce complications we’ll make an assumption that we only play 100bbs deep. 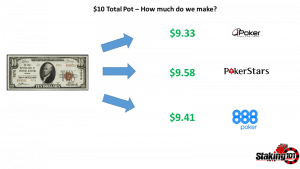 So that’s the size of the pot’s that would respectively shipped our way depending on what site we’re on. However, one thing we haven’t talked much about yet is rakeback.

Rakeback is a percentage you get back of the rake you’ve paid in this pot. I feel many are misinformed about rakeback and rake being different. This isn’t true. The amount on the graphic above isn’t how much we’re getting raked. The amount we are actually getting raked overall includes how much we get in rakeback.

Using the same sites as above let’s find out how much we actually make when we scoop that $10 pot.

You’ll see in the graphic below I’ve picked the Rakeback percentages I think our achievable at that stake. I feel at 5nl on stars the cap would be around chrome-silver star, I think 15% is just about right (maybe a tiny bit optimistic). The 80% rakeback deal (through the affiliate RakeTheRake) is for the Coral skin on iPoker and 888 no longer has a volume based rewards system, after doing some brief calculations and talking with others my estimate is that the rewards equate to around 2-3% rakeback. 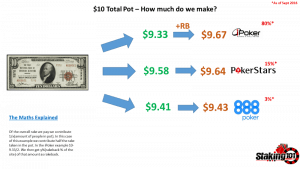 So after viewing the graphic above you might be asking a few questions.

Why would you ever play on 888? iPoker seems like a great place to play how do I join? Stars rake is that low?
Well before you all sign up to an affiliate deal with iPoker and base your site selection on the above, I’d like to approach the matter of rake from a wider angle.

The fact that some of you reading this might be thinking about playing on iPoker and never playing on 888 is actually a very big deal. This is because rake doesn’t just affect those AA>KK situations and how much gets shipped your way. It can have affects which shape the entire player pool for that site.

Whilst iPoker/Coral has some of the lowest rake online we have to ask some serious questions about the people we’re playing against. This high rakeback/low rake deal will attract a lot of regulars to the game who will tend to grind out high volume in a nitty/low variance style.

On the flip side 888 has turned a lot of regulars away from the game after they feel it is no longer worth it to grind out volume without any form of rakeback. This leads to a lower reg:fish ratio and softer games overall.
In cash games rakeback/rake only changes someone’s win rate (which will call bb/100) by about 1-1.5bb/100.
I think it can easily be said that one would be able to achieve a win rate on 888 which is 1-1.5bb/100 more than that same player’s bb/100 on iPoker.

I find that this a really interesting point to delve into a bit more as a feel that rakeback is a bit of a paradox for those out there who don’t have all the information.

I feel a fair amount of the population look at rakeback as a separate thing to rake and as a result jump at the thought of getting a good rakeback deal without doing the due diligence needed to realise that rakeback should be incorporated into rake. Looking at the bigger picture and seeing how tough the player pools are, is also a thing which many neglect.

Continuing in the general theme of increasing awareness about rake and the affects it has in a general sense let’s look at tournaments and rake and rakeback.

Relative to cash games we’re told that rake matters substantially less in tournaments. We have a bigger edge right? Rake becomes less of a factor etc.

Whilst this is true, rake is still something to take into account when comparing sites. For example, French sites such as Winamax have 11% rake for turbo’s for their MTTs compared to the 8-10% stars have on theirs. However, it can be argued that the fields on French sites are considerably softer so it could be better value to jump into the Winamax tourney with higher rake as a result.

I plan to go into more detail with this concept in another article but when looking towards long run sustainability in MTTs alongside studying and staying ahead of the curve, a really important thing to do is site select vigorously, check the lobbies, find out what the good and bad tourneys are on sites like stars. Go on sharkscope and check the average ability in the tournaments and make your decisions that way. Many grinders seriously limit their ev by not playing softer tournaments on other sites by limiting themselves to sites such as PokerStars.

Arguments such as “my schedule is already full… I already play enough tables” are empty statements in my opinion. It’s without question they can substitute out a $33 on stars for a $30 on 888 or Party and have a higher ROI. I feel this is an area many pros don’t spend enough work out.

One way I can see an exception being made is if you’re yearly buy ins is near Supernova. If that’s the case, then an argument can be made to grind fully on stars to get the 30% RB instead for the 20%ish you’ll get from lower tiers.
However even doing some quick math’s assuming you receive around 5k in RB for supernova instead of the 3-4k for having a lower tier than it could be argued you’d still make more site selecting.

I hope this has helped you get to grips with everything to do with rake. If you have any questions, feel free to comment below and I’ll be happy to respond!