So the first day of SCOOP for me was yesterday (next time I’m playing is actually on Saturday so quite a while away) and I thought it would be cool to review some hands on here with semi-interesting spots.

^ I open QQ in EP to 2.5x. The 3 better is a maybe fish who has been playing pretty aggressively and the SB is a top reg, who likely know’s the fish has been 3 betting pretty light so I still think he could be 4 betting light-ish (perhaps have some kind of polar range even though I’m in EP). There is a slight arguement for me 5 betting here but I feel that flatting is okay here. I think the BTN is going to flat a decent amount of his range and i’d rather not get QQ in or 5 bet fold 100bbs deep with this structure.

So as expected the BTN comes along and we see J22sxs and the top reg c bets which I expect him today with pretty much all his range. AA KK QQ and maybe even JJ alongside his AK and the polar side of his range. I decide to call on the flop which in hindsight I feel might be a mistake. Whilst I’m not too worried about the BTN in this spot (doubt he would jam light and we would be ahead of his flatting range). Why I think this is a mistake is because I feel the reg is going to jam a lot of turns which leaves me in a really tough spot. I think the majority of his range has us crushed here. One reason why I called was the fact he could still have air and potentially shut down on turn however looking back I feel he’s pretty much always going to jam turn since we’re relatively capped since we flatted pre. If I’m rarely calling turn I should be folding here, as weird as it seems. So he jams turn and I tank fold, I think I see too much AA KK and JJ to call off here, alongside the fact that I still have 60bbs when folding. I don’t think he shuts down turn enough and whilst he’s definitely capable of having air when he jams turn in these circumstances I think he just has it so often. Especially when I feel the reg can even 4 bet JJ here.

This is the hand I bust in the 27 in a rather interesting spot. So I have around 17bbs in this spot and I could just open jam but I don’t think min opening is that bad either, gives us the opportunity to fold to some EP jams (I know what you’re thinking dw).

So UTG+2 just rips it in for nearly 30bbs which is pretty weighted towards AK. I think he would 3 bet to a smaller sizing or even flat some of his AA and KK in this spot at some frequency. Readless I’m actually folding AQs here a fair amount however I had a note earlier on that he 3 bet jammed AJs for 40bbs UTG+3 vs UTG+1 so with that in mind I think we have to call here since we can add some AQ and AJ to his range in this spot. He rolled over AK and I’m not really worried about that, all he needs is enough PP’s and some AJ/AQ etc for me to be making money in this spot, which I think he has.

All in all I’m pretty happy with how I played. The structure for the 27 was amazing and whilst there are going to be some good players at you’re table there are also a lot of people who punt off. Guy late reg’d 2 hours in and open jammed 80% of hands.

The 7.50 was a bit of a crapshoot and I ran pretty bad in that one but again still think I picked decent spots.

If anything it was nice slowing down, taking more notes, taking more time about decisions and just playing one (sometimes two) tables over the course of a few hours.

Any questions about hands or anything else at all feel free to PM me or post below.

Kind of a side note but I drove down to the beach early this morning and listened to a doug polk podcast in the car, was pretty informative and always interested to hear what a primarily cash game/sng top pro thinks about MTTs as a whole.

As another side note I recently passed 100k MTT hands played on PT4 on Stars! 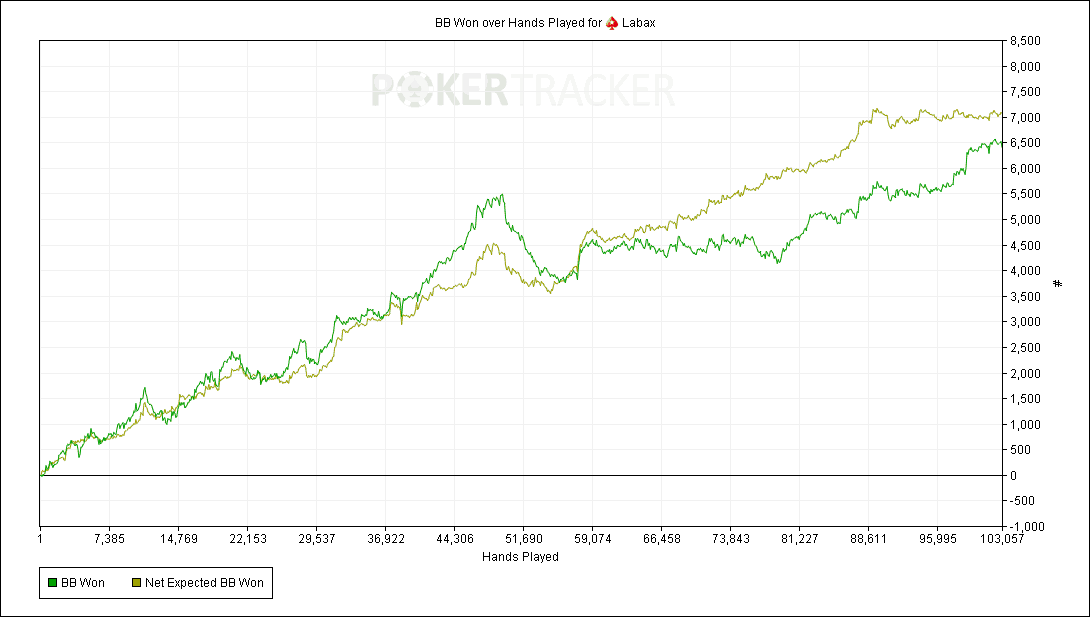 You would assume that someone ripping on a 17bb utg open would be fairly strong, most shouldnt be reshippin AJo there (even though u had note on him) and since im presuming you play fairly tight. Does he have enough AJ,AQ,KQs and small/middish pocket pairs etc to make it a profitable call there? Against that exact player maybe, but against most probably not. Most of the time as you say its going to be weighted more towards AK and like 99-QQ probably, but raise folding AQs to a 28bb shove seems awful right? lol

Anyway not sure on what the table dynamics were here but id probably just open rip AQs utg after all that haha. Puts pressure on the rest of the table, who may otherwise try and get funky on us, if get folds we pick up decent amount of chips going into the blinds, if we are called prob always flippin but AQs can flop pretty well.

You May Also Like
RUSSIAN GOVERNMENT SHIFT IN ONLINE POKER

17bigs AQs utg ship it allday, hate the min open your just inviting more players into the hand at best you wanna be heads up possibly flipping or just take the blinds. +EV ripping it utg and picking up blinds.

Yeah I guess jamming it is pretty +ev. It’s just so easy to play/defend against like 17-20bb UTG jams. People are almost always capped at AK/AQ and middling pairs and regs call off pretty correctly. It’s one of those spots where it’s always going to be fine to jam but I think it can’t be too bad to mix up once in a while. Maybe I’m just getting the better of myself here and this is a 100% jam regardless and maybe this is just a mistake by me in an attempt to not become that easy to play against. I guess if I’m jamming the whole time here a cool thing to do would add AA into our range and exploit the fact that the general population is pretty capped in this spot.