So here I am, on another river met with the tough decision of either spew calling or over folding. What to do, what to do… 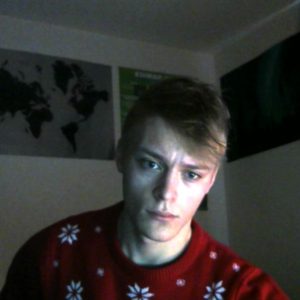 All jokes aside (for now), the above picture shows a look not disimilar to the one I embody whilst grinding. I feel it’s largely a look of pensive thought combined with some underlying stress. Granted in a few weeks the christmas jumper will with all likelihood be retired (not making any promises though) but you get my point.

In prior threads I’ve somewhat omitted the regular use of pictures. Part of me has a great desire to live in the moment and not document every aspect of my life through photo’s/video’s. Memories are important though and I feel pictures do help give an extended insight into how someone is doing and what kind of experience they’re having at that given time.

To demonstrate this rather obvious point I thought I’d share a picture of my desk in my room and use the picture to describe a bit of information about my current situation. I’m still not sure if I’m using this as a gateway to show my set up or in fact to dictate the effectiveness of pictures, maybe it’s both?! Who knows maybe it’s even to prop up my own self worth, a triple range merge perhaps. I promise to cut out the Micro’s references for the rest of the post.

I’ll be serious from now on I promise. 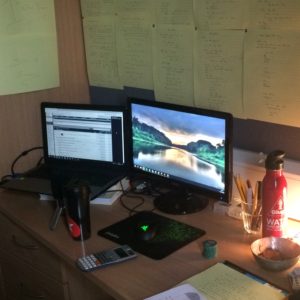 So this is it, I bought a second monitor which I genuinely think is one of the best technological (hell maybe even life) decisions I’ve ever made. Why I didn’t get one earlier is beyond me. You’ll also notice that I have 2+2 in particular PGC open, I spend a lot of time reading PGC threads on here and I love the variety of people and games you see in the threads.

There’s also some notes in the form of theory for both poker and my degree. It’s roughly organised but useful to look at when I’m at my desk. One thing I do need to get better at is general organisation alongside setting out a timetable of what I need to do and be strict with it, this was all adviced in an “organising a heavy workload” workshop I went to at my university, definitely +ev.

The more eagle eyed of you may also notice a piano lurking in the corner, whilst I got it extremely recently and am I fish right now I find it’s a great way to relax and take my mind off other things going on in my life. A definite aim for this thread is to showcase a fair amount about my life and I hope to get to the stage where I can create my own songs and post them on here.

I also have my maths homework which is still due as we speak. Going off the organisation point I made earlier I do need to be more diligent and efficient with managing work next semester.

I also have a water bottle, a stars thermos (actually v good quality and better quality lid than any other thermos I’ve earned, maybe doesn’t stay as hot as others do but definitely worth it) and some poker chips.

I try and drink water most of the time but the Brit inside me finds it so comforting to sit with a warm drink at pretty much any time of the day. I do realise that caffeine is not an ideal supplement in regards to long run ev so if any of you have any suggestions for warm drinks that can be consumed 2/3 times a day with no potential health risks then let me know. And no I didn’t just get scared about caffeine from WebMD I know from personal experience that the act of me trying to sleep is greatly affected by caffeine (why do you think I’m writing this at 5am).

The poker chips are there to shuffle and remind me of the ev of live poker. Who know’s how much longer online (maybe excluding mtts) will be going on for. I should really jump on the horse at some point but for now I like being in my room grinding away, I like having personal space from time to time and grinding poker gives me that opportunity since most of my university work is done at the library.

So let’s actually go into a bit more detail about myself now you know some vague things about my life.

I’m twenty and in my first year of an engineering degree at university in London. The degree could be going better, I could be more motivated and commited but it could also be going worse. I have a lot of mini exams over the next week so poker will take a slight back seat until those are over.

I love being in London and do plan to go out and explore more, I’m lucky to live with people who like seeing new things which definitely gets me out of my room and off my arse at times.

In regards to my poker history, I’ve pretty much played every format. From mindlessly semi-spunking MTTs to grinding zoom (BEish grinder here) I’ve epereinced a lot. I could go into more detail but I thought I’d direct you to a podcast I made about my history in poker, don’t worry, it’s just as jumbled and confused as this post so it won’t be anything out of the ordinary.

So going to the current situation (even though it’s mentioned in the podcast I respect the fact that not all of you will listen to it) I’m currently playing $7 Spins for the stable SpinBeasts.

It feels great to be in a constructive environment surrounded by smart people who all want to improve. It’s really made me realise the ev of studying and receiving coaching. To all of you currently grinding away hoping doing the same thing over and over will reward you with success, I urge you to post more hands and get into study groups and really work hard, it’s worth it. I wish I “actually” studied way earlier in my “career” (I couldn’t think of a word better than career..).

So poker wise whilst at university I plan to get around 1.5k games/month. In the summer though that all changes, I’ve been fortunate to win/run well enough so far to of made more money then I would of working a part time job all through the summer (and then some). As a result during the summer I plan to play spins “full time” for two/three months. I plan for one of those months to go somewhere in Europe and grind from there. I feel since I’ve got the freedom to play wherever I want I might as well make the most of it and not just stay at home in England all the time. I have so much to work on with poker but I’m really driven to give myself the best shot at making it work.

You can expect regular updates with the occasional chip ev graph and my thoughts about spins and how I’m finding them. Maybe I’ll stream on twitch who knows, one thing I definitely want to work on is trying to be as positive and mentally secure as I can be whilst grinding. I’d say my mental game is much much better than it used to be but I hope to eventually get to that zen like stage where I give zero fucks about losing a 4x. I mean often I don’t care but you know’s there’s always that one hand that sends y-.. I’ll stop now.

Instead of just making this thread about poker I thought I’d also include a fair amount about self improvement and how I aim to get more out of my life and feel happier as a whole.

I feel I’ve come along way from the person I was 1-2 years ago, I was generally quite a cynical person often depressed and boosting myself up by laughing at other peoples misery, I mean I still watch Fail Army on a weekly basis but it’s a far cry from openly criticising the actions of people close to me every other day to make myself feel good.

I’m now a lot more positive and try and find and enjoy the positive things in life, but just like in poker, you should always strive to go even futher and push yourself.

Giving a quick early morning self assessment I know I’m still relatively self concious and don’t want to be seen making mistakes or failing. It can be something simple pushing a door instead of pulling it or dropping a book whilst walking to class. I feel there’s a pressure on most people (including myself obv) to fit in, to wear normal clothes, to do normal things, to not stand out. So much so that I often find myself falling into the trap of doing things just because everyone else does them instead of really thinking about something independently.

Now granted, often the decisions which a society tends to follow are somewhat water tight (I said often ;)) but there’s nothing wrong with questioning things a second time over.

Another thing which I guess ties into the above point is the fear of rejection. I’ve dealt with some hardships and got over them but I’m far from the perfect being in regards to not being afraid of rejection.

I recently watched/listened to a Ted Talk about lessons from rejection and it’s really opened my eye’s to the possibilities of just being forward and proactive and not holding back your opinions and not being afraid of getting rejected. Much like with my poker background I’ll link the video right now.

I thought I’d address a point which… well none of you have brought up but whatever. This isn’t I guess a stereotypical PGC thread, that’s not me trying to be hipster or fire shots.

This thread is largely for myself, that doesn’t in any way mean I don’t want anyone reading to not gain anything from it or that I don’t want any interaction, quite the opposite.

My point (which I’m rather poorly putting across) is that I doubt this thread will cater to the masses, this post, for example, is super long and I don’t many people in PGC would read this long of a post from a random (I don’t blame you either), also, a lot of the posts may be quite different, some more poker based, others more general life based, might be a fluctuation in length and time between posting etc.

If you do gain something out of this thread and find it interesting then awesome, whatever happens hopefully I can look back through this in the future and see what’s changed. I’ll be happy to answer any questions so feel free to fire away!