So first off I’d like to apologize for not posting for over a week. I’ve just had a pretty awful cold for the last few days and have been quite busy. Actually hold on a second…

I don’t actually know why I’m apologizing, it’s probably down to me just being British and apologizing about everything but being somewhat serious I’ve never felt any pressure to update this blog on a regular basis.

“This definitely needs to be in the blog”

As of right now I may finish the Finale of The Trip Report some other time because the end of it was pretty boring.

Not in a bad way at all it’s just not many interesting things happened, I didn’t play any more live, I played online a bit and got crushed. It actually feels kind of weird that I’m reflecting on something which happened a few weeks ago and thinking about how much has changed since then.

So I get up on a Thursday unsure about what to do with my day. I could play some more chess, I could go out somewhere.

I end up grabbing some breakfast and chatting to Rob a bit.

Later on during the day we decide to go out to this chess shop on Baker Street. For those of you that are interested in chess this really is a great place to go and I highly recommend it.

I end up buying a really good travel chess board and some weighted pieces for a really good price. Both me and Rob chat to the store owner for a long time and ask about London’s chess history etc.

This is where I should input a picture of the chess board and pieces, I don’t know how many more times I’m going to remind myself to post pictures before I actually start doing it…

We get back home, play a bunch of the new board, it’s so great and was definitely worth the purchase.

Later on in the evening since not much was going on I thought it would be a decent time to play some scheduled tournaments since I had a fair block of time ahead of me. 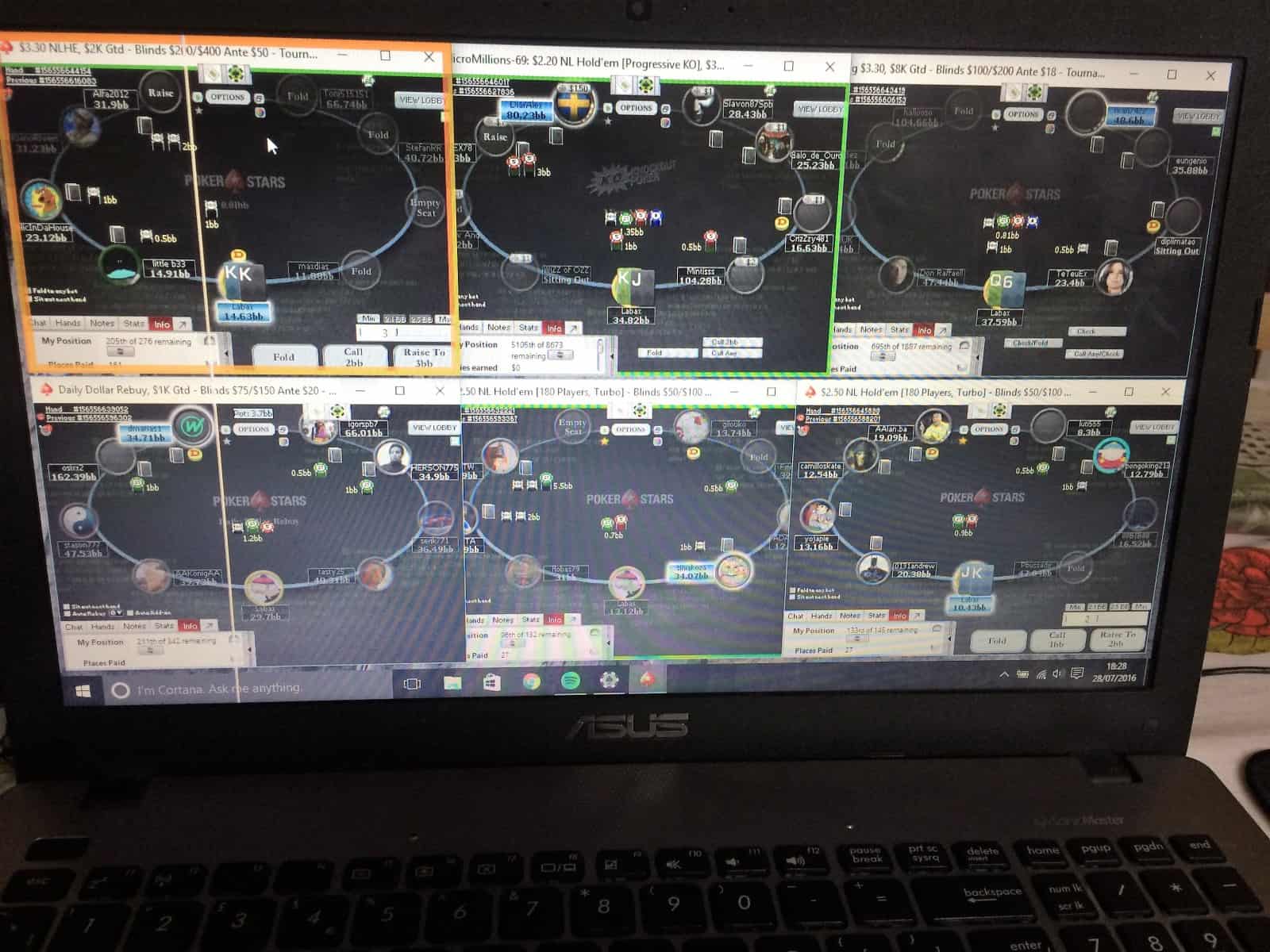 Yes that annoying line is still there, it’s on my screen right now when I’m typing this too. FML FML FML, mark my words I’ll be getting a side monitor one day and running everything off that.

Those of you with beadier eyes might be thinking..

Cheers yeah, pretty much everything went to crap though. On that 3.30 2k where I actually have the KK I think I ended up getting something like 13th for $20 dollars, couldn’t win the big fliperino’s 🙁

I brick the large amount of the session and crash.

I wake up the next day and it’s pretty similar to the last, a lot of chess, chilling out and chatting, poker in the evening, brick the session etc etc. (told you not much interesting stuff went on).

So it’s Saturday and I’ve already got my ticket to leave from Waterloo or whatever. Before I go though I’ve made plans to meet up with an old school friend in Covent Garden. On a Saturday.

On a Saturday, on a fuc-

I don’t actually know why either of us even decided let alone brought up this location. We get there, I walk up the 200 steps from the tube station (not joking, I’m sure some of you have been in that spot too) and walk outside.

I could just go on a rant about how busy it was but that’s not really that interesting.

What was slightly more interesting is that the large amount of the people there were kids/teenagers from abroad on some kind of summer camp/school trip. I guess this is what happens when a currency tanks.

I’m not even exaggerating here I’d say that 60-70% of the people walking around Covent Garden were kids on trips.

So me and my friend from school walk around a bit, look for a place for lunch. After around 5-10 minutes of walking a similar loop we see this Italian place that advertises take-away pasta for £5.

Can’t be that expensive we both thought.

Shoutout to the guy that came up with that idea, nh wp, you got me.

We both kind of shrug and say we thought it would be cheap, we’re mugs I know.

“Hey, the food could be okay”

Well more surprises are due, the food was pretty awful, just touristy mediocre spaghetti. Not even the meatballs we had were good, just really bad quality. Service was really bad too, you think if they were charging that much they’d actually care.

I’m going to stop before this turns into a Trip Advisor review but yeah, I don’t plan to go to any unchained place in touristy area’s again. <- Note to self.

“How did you get a seat at peak time it’s always really busy??”

I rock up to the station pretty early, no big deal. I take a seat, take out my banana’s and water and scout.

The boards of course, I sit there eagle eyed waiting for the platform update and suddenly…

I leg it to the platform, everything’s going to plan. I swipe my ticket through, look behind me and smile as I strut up the platform, a pack of what I can only assume are ants are miles behind me.

I get on the train, get a good seat and relax. I reflect on the trip and was really happy that I decided to do it. I needed a break from home.

I arrive back home and the dog and family greets me at the door, I drop my bags in my room. Have some dinner and get an early night. Sleeping in your own bed after some time away is such a great feeling.

So with that trip over I guess we should move onto current life.

As you’d expect with the Olympics on currently you get the usual family comments.

You know the classic.

“I can’t believe it’s been 4 years since London!”

Okay well for a start I can because the Olympics is every four years.

For those of you who think I’m going to continue to be an asshole for the rest of this post you’re wrong!

I look back to what I was doing four years ago, what I had ahead of me, what’s changed all interesting.

It’s funny how an occasion can help jog your memory and reflect on things you haven’t thought about for ages.

Since I’m such a slick individual I thought this would be an appropriate time to make this posts song one which I haven’t heard in years but suddenly remembered.

Anyway going back to the present I’m currently taking a break from playing poker. I know I’ve probably mentioned this a million times..

I’m still studying a lot though, watching a lot of Ming The Merciless’ stuff on twitch and looking at a lot of hands posted on this site.

It does feel kind of weird commenting on a lot of hands and being on this forum and not even playing a single hand but I think this experience will help me a lot.

I think I’ll become a lot more disciplined and when I do start playing again (early September) I feel I’ll be in a better frame of mind and super motivated.

I actually really want to stream me playing cash games on twitch but I don’t want to hype this idea up too much since I may end up getting to my flat at university and having god awful internet and gg.

Life wise one thing the cold has actually benefited is me sleeping a lot more. I’m getting to bed a lot earlier now and waking up earlier which I think is good for me.

I’m also working a fair bit, I’m doing a lot from this coming Monday, it’s a super boring job but two weeks of it and suddenly I’ll have a lot of money for university.

I feel in a better state of mind too, I still can’t wait to go off to university and be surrounded by some new people. At least I can drive, I don’t know what I’d do if I was just locked up at home all day.

Going back to the song quickly, it basically talks about relationships (the swings/fragility etc). I thought I’d bring up what I think is a relatively interesting view I have/had towards relationships.

So from the start the plan has always been to go off to university in London in September. As a result I’ve kind of put off a lot of potential relationships in the area I’m at currently.

“Why would you do that?”

I’ll explain my viewpoint, which I’m still toying with.

So I put off a lot of “stuff” this year because I didn’t really think it was constructive because nothing serious could really form due to me going away in September.

Probably a lot of “hmmm” and “wtf” being tossed about right now but hear me out.

Going into more detail I just feared that something would happen, the girl gets super attached but in my mind there was already this September mark in my mind. I don’t think it was fair from my perspective to lead anyone on and hurt them, especially when they could find someone else in their area who had plans to stay/work in that area for longer than me.

I think this is maybe a flawed viewpoint of mine for quite a few reasons.

One, we could get on really well, tough it out through university, see each other every so often, deal with the distance etc. I just know that distance is super hard and it’s caused me to lose things in the past which I never wanted to lose.

Secondly, maybe I could just inform the girl of the situation and she herself could make an informed decision. Maybe I shouldn’t of being trying to protect someone from something they could make a decision about themselves.

It’s just I know from past experience (lol sample size) that before you know it the girl is talking about what colour wallpaper she wants in the hypothetical master bedroom and I’m there thinking about what I’m going to have for dinner when originally we only agreed to just have some fun.

I’m kind of just afraid of hurting anyone (else?) at this point.

I don’t what I should really do in these spots…