We know that Endorphina are big fans of Slots Guide so is it a stretch to think that their new Voodoo slot was inspired by our good selves? We have been banging on since our inception about the lack of adult themed slots out there on the market and lo and behold Endorphina have come up with a cracker. This 3 by 5 reel 10 line slot is scary as hell.

The general premise and play ability of this slot is very much in the mould of the classic Book of Ra, with 3 wilds getting you 10 free spins which are re-triggerable. However instead of having one expanding symbol, in Voodoo all symbols can expand if they land on the first 2, 3 (or 4 or 5) reels. There are some big wins here, for example landing 5 Aces or Kings will net you a sweet 125 times stake win.

Well done to Endorphina I say for first of all bringing a slightly new twist on a tried and trusted slot formula but mainly for giving us something for the adults rather than catering to the kids who shouldn’t even be playing slot machines! 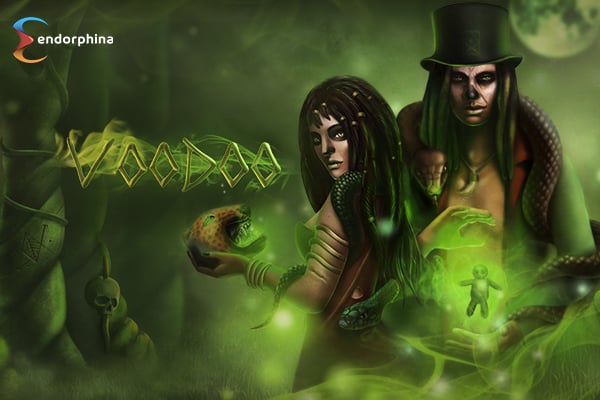 Just in the time for Christmas, Endorphina is releasing a new slot game as an early Christmas gift for their players. Don´t expect a joyful, Holidays themed, bright colored slot and prepare yourself for dark and intense experience. The newest addition to Endorphina´s portfolio is the Voodoo game, inspired by the mysterious world of this old belief that has fascinated people for centuries, not only for its magicals rituals, but also for the spells and obscure traditions of Voodoo practices.

Gloomy atmosphere, enchanting sounds and the unmissable sorcerer character with the witch will create the perfect illusion of the deep forest where the natural spirits reign. Players will be hypnotized by the mighty Damballa, the serpent God that is said to have created the world and majestic raven, the symbol courage and wisdom.

When you get the reels spinning, you pray for the Voodoo man to appear on the reels and grant you with 10 free spins that can be won again during the feature. What more, during the feature any of the symbols at the winning combination will expand to cover the entire reel.

Enchanting Voodoo slot will get the players hooked not only before Christmas but for much longer time.

An expanding symbol is a great feature and Endorphina brings the Voodoo slot with not one but several symbols that can expand within 1 spin.

You can tell that Endorphina has put a lot of effort into the Voodoo slot. Its graphics, background music and features are truly amazing and tuned with the tiniest details. The game takes players to the mysterious and enigmatic voodoo world. When the night has come and the land is only lighten up with the full moon.

You will get a Raven, Snake, Doll, Cheetah’s head and Voodoo Woman as symbols on the 5-reel, 3-row, and 10-payline Voodoo slot. The main symbol is an expanding Scatter, Voodoo Man that inhales smoke. When 3 or more Voodoo Man symbols appear, he exhales the smoke and 10 free games are triggered.

Everything is covered with the red smoke during the free games and there are beautiful yet poisonous flowers that magnifies the game experience.

During the free games, symbols that occur in a winning combination from left to right expand to cover all 3 positions on the reels. More free games can be won during the bonus.