Wild Wizards is a slot by RTG casinos slots, and it comes with 25 pay lines on 5 reels, substitutes, scatters, bonus games, jackpots and the usual RTG maximum win of 50 000 times per paid bet line. The game was released in 2015 and has the features and qualities we would expect from a modern slot. That is to say the graphics, music and game play are well done, and there’s plenty of bonus games to keep the player interested.

The graphics, music and options

The symbols consist of the usual nine to ace cards, which pay out the minimal wins, and the special symbols that give bigger wins or trigger different features found in the game. The wizards feature constantly in the reels, usually through different animations as they reveal several kinds of wins or by triggering the bonus features. The music and sound effects are nothing to write home about, and although they do their job you’ll likely end up turning them off in favor of something else to listen.

Different options include mainly different check boxes for the auto play feature, the speed control in the game itself and the option to turn off the sound. Not a highly customisable game then, but then again slots never are and the auto play features and choices are quite a welcome factor for all of us who don’t feel like clicking the spin button at every turn. You can also control your betting level and of course the number of lines you’re betting on. The special symbols include wizardly things like hats, owls, potions, spell books and whatnot.

As the reels rolls you quickly pick up where the real wins are: in bonus games. As comparison in the basic game I tended to only land small wins, which most of the time didn’t even cover the initial bet. What the point of offering a 30 cent win on a 40 cent bet is, I do not know, but that is what happened more often that not. In contrast the bonus games in Wild Wizard are quite exciting and plentiful.

The wizard himself functions as the substitute symbol, on the reels 2 through 5 always expanding to cover the whole reel. The spell of books works as a substitute for other symbols, and together with the Wizard it will activate one of the five bonus games at random. Always remember that the bonus games are bet on the same lines and bet level as the triggering spins are.The bonus games play out as follows: 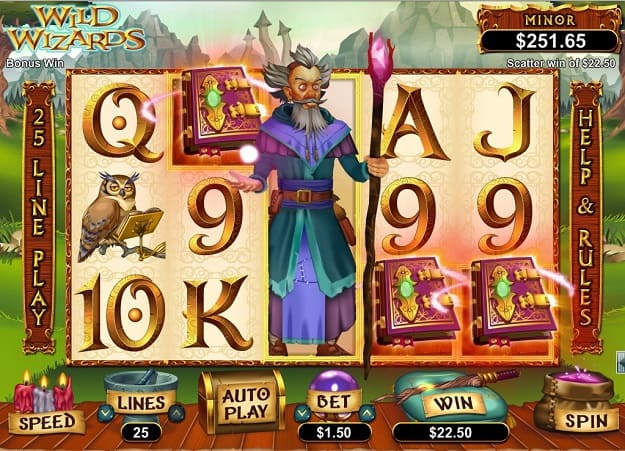 Wild Wizards slot is not something that’s gonna take the world by storm, but it is an improvement from RTG compared to some of their earlier slots, and it will certainly find an audience in those who like bonus games. The only real minus is the basic game play, and the tendency of the game to dish out such small wins that they won’t even cover the initial bet. On the other hand the bonus games tend to credit hundreds if not thousands of euros at a time. We recommend trying the game, especially if you have some free spins available.