Yako casino review (The important stuff): Yako casino started out with the best intentions however were saddled with a lagging website and couldn’t land the elusive UKGC license. However, as of 2017, in our updated yako casino review, we find they moved back end providers and the website speed has really improved. They have also finally landed themselves a UK license, making them a tremendous addiltion to the UK online casino market. Yako casino is improving all the time as the team behind it work very hard to make it a success. Fingers crossed they keep the improvements coming as they may well be onto something here. 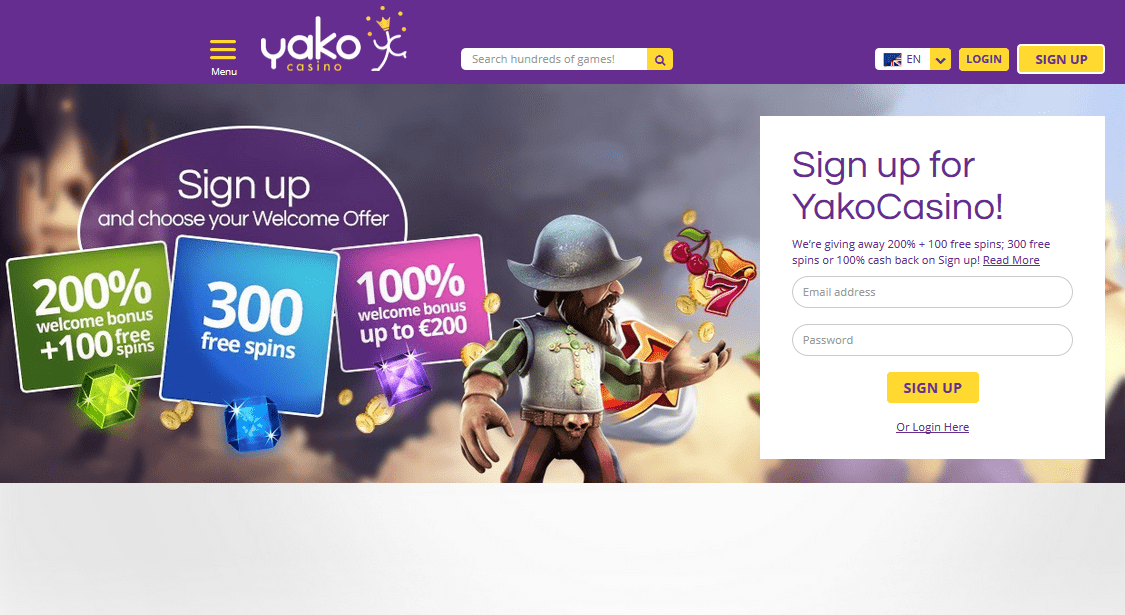 In 2017 Yako Casino moved to a new back end platform whilst also obtaining a much sought after UK license and the casino has gone from strength to strength since the move. Fingers crossed they start expanding the providers soon as well and we could really be on to something. One thing is for sure, the owners and team behind Yako are really pushing and working hard.

Yako Casino opened their doors on the 3rd of August 2015 and promise to offer something new, personalised and unique. The brains behind the new venture come from former directors and developers at among others, Mr Green Casino and BetSafe Casino.

Tired of the same old, same old at most online casinos to be found these days, they are aiming to offer a fully personalisable system as they explain:

“When we first starting dreaming of setting up our own casino, we didn’t know exactly where we wanted to go, but we knew what we didn’t want to be. The world has enough boring casinos touting the same games, shoving them in front of players’ faces 24/7. We don’t like that. We don’t want that. At Yako, you won’t get that. Let’s face it, everyone has tastes and preferences. For some, it’s sushi and sake, for others it’s duck a l’orange and a Pinot Noir.

We get that. That’s why Yako Casino (literally translated from Swahili to ‘Your Casino’) is exactly that; the casino that cares about what you like and serves it up in the portion that you want.”

We are really looking forward to their doors opening so we can have a good look at the innovations they are promising and can start testing out if they are delivering on their promises for five star customer service.

Yako Casino is a great concept with all good intentions, unfortunately they just haven’t quite hit the spot with everything they have done. That is not to say this is a bad casino, far from it. Great customer service, good selection of games and they have had some really innovative ideas regarding player bonuses. Alas sometimes the site is a little bit slow but if you can handle the website being a bit laggy sometimes then we still recommend Yako Casino.

Update: Yako have upgraded to a new and quicker casino back end platform and support system improving the all round experience greatly.

€2,000 up for grabs at Yako casino (Expired bonus no longer applicable)

The Olympics might have ended in Rio, however we are still feeling in a sporty mood here at YakoCasino so we’ve got an exciting casino race on for you in the last week of August. We’re giving away €2,000 in cash bonuses to the top 25 players.

How do I participate?

Entering the draw is simple, all you’ve got to do is spin the reels 100 times with a minimum value of €0.40 and start collecting points…compete against players from around the world and play to win! The more points you collect, the greater your chance of placing in the top three positions. We’ve also got €550 to give away to another 22 players who didn’t quite make it to the top 3.

Keep an eye out on the leaderboard and give it your all – you definitely don’t want to miss out!

I’m a winner – what are the prizes?

Let the games begin! The rules of engagement

2. This promotion is open to all countries

4. Only game play on slots and videoslots will count towards the race

5. On Friday 2nd September, a draw will be held and the top 3 players (with the highest amount of points) will win our Gold, Silver and Bronze prizes. A further 22 players will win €25 each, so in total we’ll have 25 winners in the “”Race to September””! The prizes come with a 1x wagering requirement and will be credited in your account by 18:00 CEST on Friday 2nd September as follows:

7. Game play with bonus money or bonus winnings will not qualify for this race. Only real money bets count towards the prize pool of €2,000.

8. By participating in the race, you agree that your personal details can be used for promotional purposes

The Yako in mythology

Yako is the spirit possession of foxes as explained in Kyushu. To be possessed by it is termed “yako-tsuki”. The Yako – literally meaning field foxes, are also called nogitsune, and tend to be mischievous or even malicious.

The appearance of a Yako is almost completely consistent among all legends, and unlike real foxes, they are black or white, are slightly larger than a mouse, and smaller than a cat. The original Yako is said to be invisible to the eye. In Hirado, Nagasaki Prefecture, they normally bring along a great crowd that walks with them, and thus there is the phrase “yako’s thousand-fox company (ヤコの千匹連れ yako no senbiki ture).”

In Nagasaki Prefecture, Saga Prefecture, and other places in Northern Kyushu, those who are possessed by a yako show symptoms like an illness. On Iki Island, they are also called Yakō, and since they resemble weasels, it is said that when one of them conceals themselves under a person’s armpits, that person would become possessed by a Yakō. It is said that getting a burn or smallpox scar licked by a Yakō results in death, and those who have been afflicted with smallpox would go inside a net in order not to get close to a Yakō, and protected themselves from a Yako getting in by either scattering ashes from an epaulette tree or leaving a sword.

In Southern Kyushu, family lines would get possessed by a Yako, and family lines that raised Yako (possessed by a Yako) would have their progeny possessed, and if they were no longer able to support it, it would possess its cattle and horses. It is said that the people of families that have a Yako could incite the Yako to possess those they have bad relations with, and in Kiire, Ibusuki District, Kagoshima Prefecture (now Kagoshima), it is said that becoming possessed by it results in becoming a semi-invalid.