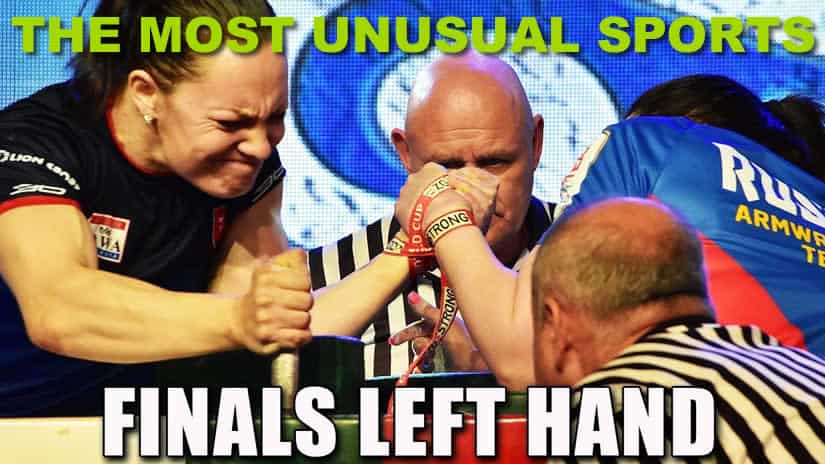 People around the world — mostly men — have been looking for fun and interesting ways to compete with each other for thousands of years. Over the centuries we’ve devised games that include everything from throwing balls to throwing trees. In some, you win for moving fast. In others, it’s for moving slow. Some require a massive physique and others require massive mental power.

If you’re the type who likes to bet on sporting events, you may not know that you can place bets on dozens of different sports that go far beyond the most games like football and rugby. There are surely at least a few you’ve never even heard of. Best of all, though, is that the more obscure sports and wagers tend to offer larger potential payouts for correct predictions.

Following is our list of the most unusual sports in the world that you can actually bet on. If you know some, then good for you. If there’s a few that are new to you, look them up and get yourself a piece of the action! You’re bound to find a few from our list that will get your adrenaline pumping. If you need a break from online casinos, you may find these sports interesting!

It’s hard to imagine how this game became any sort of organized sport. You’ll first ask yourself who was the first person to come up with the idea. Then, quickly after, you’ll be wondering how he managed to talk anyone else in the world into taking up the game along with him.

A cow chip, for those who don’t know, is a sun-dried and hardened piece of cow dung—caca, poop, doo-doo…shit. The used cow fuel tends to flatten on the ground and form a somewhat circular shape, which is where the term “chip” comes from.

So yes, what you’re thinking is correct. Grown men (and women) stand with one another, pick up piles of cow dung (bare-handed even) and compete to see who can throw it the farthest. Chips must be at least six inches in diameter and each contestant is allowed to make two throws with the longest throw counting as his or her final score.

You may have to dig deep and get down to the local level to find someone to take your bets, but you can indeed bet on this sport. If I were you, though, I’d bring a bottle of hand sanitizer and put any hard-won cash through a cycle in your clothes washer.

Hurling is a game with Irish roots that is enjoyed and played in many different places around the world. It is, however, still the most popular by far in Ireland. It is often referred to as “the fastest game on grass.”

The game is played by teams of 15 on a grass field with goals on each end that resemble something like a cross between a European football goal and a rugby goal. The skills required are a maniacal mix of football, baseball, hockey, and lacrosse. Oh, and every player on the field carries an axe-shaped stick (the hurl) that can be used in just about any fashion they choose to stop or strike the ball or another player’s hurl.

The action is fast and furious and this sport most definitely has the potential for some brutal physical contact. It’s a wonder that it hasn’t caught on in more cultures during its approximately 4000-year-old history.

Arm-wrestling most certainly takes good technique and a considerable amount of strength if you want to get anywhere close to becoming a champion. That said, however, it’s also one of the most boring spectator sports on the planet. This is the type of competition where the excitement level is definitely enhanced by a bit of wagering on the side.

Betting on arm-wrestling competitions might not be as popular as something like football games, but you will still find plenty of sports betting operators that will allow you to lay your money down on some of the bigger competitions.

Harness racing is a somewhat less popular version of standard horse racing. It’s often called “trotting” in some places around the world. It operates under the same basic concept as traditional thoroughbred horse racing but the horses and the way the jockeys connect with them are quite different.

In this type of race, the jockey sits behind the horse in a two-wheeled contraption called a sulky, or spider, which is harnessed to the horse. Exact rules for the races vary in countries around the world. The United States requires standard-bred horse while other countries allow for several different breeds to compete—some in mixed races, some segregated.

In most places, interested gamblers will find the same basic wagers available that they would normally see for any horse racing event.

What really sets this sport apart from other forms of equine competition, though, is the potential for accidents. It’s bad enough to fall off a horse running 45 or 50mph. It’s an entirely different thing, however, to flip over while strapped in a buggy and be dragged through the dirt on your head behind a horse running 45 or 50 mph.

Yes, somebody, somewhere, thought it would be a good idea to take the imaginary game of quidditch that J.K. Rowling described in the Harry Potter story and movie series and turn it into a real-life sporting event.

Players, of course, don’t zoom around through the air on flying broomsticks, but they do run across a field with a broomstick between their legs following the same basic rules that were laid out by Miss Rowling.

It may sound unbelievable, but there is actually a Quidditch World Cup and people have been betting on it since about 2011.

Gaelic football is a fast-paced mix of skill that falls somewhere between football and rugby. It hardly gets a mention anywhere else around the world, but the sport enjoys a strong following in Ireland where it can bring in crowds of up to 80,000 spectators.

Goals on each end of the field have a lower section that looks like a football goal, worth three points, and an upper section which looks like a rugby goal, worth one point. Players can carry, strike, and pass the ball with their hands as in rugby, or kick it along the ground as in football.

The action generally moves quite fast. Physical contact during the games is high and scoring opportunities come quickly. If you’re ever wanted to watch and bet on a faster-moving, more violent version of football, Gaelic Football is the game for you.

Jai Alai (pronounced high-lye) is a high-speed ball game played in an open-walled arena called a fronton. The ball, referred to as the pelota, is bounced off a wall in a similar fashion to handball but the players use a special hand-held basket, called a cesta, that allows them to accelerate the ball to speeds of about 200 mph.

The game has enjoyed various states of popularity in different countries around the world but has more or less become a sport played solely to create wagering opportunities around it. It is quite popular in the US state of Florida, some places in Latin America, and in the Phillipines.

Even though it may be difficult to find a fronton where you’d be able to watch a live game, opportunities to bet on the games shouldn’t be hard to find at all.

Yes, we’re talking about the children’s hand-based game of wits, “rock, paper, scissors”. It may be up for debate whether or not it qualifies as an actual sport, but you can most definitely place wagers on the outcome of competitions organized by the World RPS Society.

It may sound silly, but both fans and competitors are just as devoted to this “sport” as those of any other. Their faith is real, and so it the possibility of winning some big bets.

Pesäpallo is a Finnish sport which is often referred to by outsiders as Finnish baseball (which irritates the Fins to no end). The game has bases, a bat, and a pitcher, but that’s about all that is really similar to American baseball.

The pitcher in this game stands right in front of the batter and throws the ball straight up in the air, setting him up for a rather easy hit. Runners hit the bases in a zig-zag pattern and, of course, there are quite a few more variations in the rules.

There is a Pesäpallo World Cup staged every three years where teams from Australia, Estonia, Finland, Germany, Sweden and Switzerland play against each other. Games within Finland are played between 14 official men’s teams and 10 women’s.

There are plenty of online betting sites that will take wagers on Pesäpallo. You’ll find many of the same types of bets available that you’d see for football or rugby and other popular sports. You can bet on games, league champions, the world cup, of course, and more.

eSports may seem strange or unusual to some of our older readers, but to the Millenials and younger generations playing video games at a world-class level takes just as much skill (if not more) as playing any game or sport in the physical world.

There are eSports competitions based on many different games involving everything from simulations of real-life sports like football, baseball, basketball, and hockey, to the ability to survive in massive multi-player battle arenas where everyone has a virtual bullet with your name on it.

You may be wondering if this is something to take seriously. We can tell you that it most certainly is. Some of the world’s best eSports competitors are landing contracts that pay them just as much as any traditional professional sports player. Video games are big business and the competition is fierce.

You’ll find that most online sports betting operators will already accept wagers on various eSports tournaments and competitions. Those that don’t will most likely be doing so in the near future. The opportunities are just too big to ignore.

So there you have it. Ten strange sports that you can place bets on. If you’re looking for something new to add a little bit more excitement to your weekend wagers, we highly suggest you check them out. Of course, if you’re going to do so, you should only play with money you can afford to lose. Don’t overextend yourself!