The Breakaway Deluxe slot is an ice hockey lover’s dream machine. This slot is the result of a collaboration between Microgaming and Stormcraft Studios. The design has a somewhat classic look, using flat icons and colours. You can tell right away that the designers were going more for a classic hockey look than a super modern slot look. There’s nothing wrong with that, though. It definitely works. You can find all Yggdrasil Gaming slots at most UK online casinos.

Breakaway Deluxe is a five-reel, five-row slot that allows you to take your choice of playing on 18, 38, 68, or 88 pay lines. There are nine regular symbols on the reels plus wild and scatter symbols, giving us 11 overall. Among them you’ll find several hockey players, a referee, and a few scenes you would expect to see at any ice hockey game. Almost sadly, the lowest paying symbol on the reels is the poor zamboni.

This slot also uses a cascading symbols function to give you an extra shot at more money with every win. Whenever you land a winning spin, the symbols involved in the win will be smashed off the reels, remaining symbols will fall down, and then new symbols will come in from the top. The process will repeat and continue each time there is a new win until no new wins are created.

Setting up your bet on Breakaway Deluxe looks a bit more complicated than most other slots at first, but the process is still fairly straightforward. As we already mentioned, you have four different options for how many lines you want to play. You can also choose the value of the coins to use and how many coins you want to bet on each line. The minimum coin value is £.01 and the maximum is £.05. You can play from one to ten coins on each line. When we take everything into account, that gives us a minimum bet of £.18 per spin and a maximum of £44.

Play the Breakaway Deluxe Slot at These Casinos

Yes – Why To Play The Breakaway Deluxe Slot 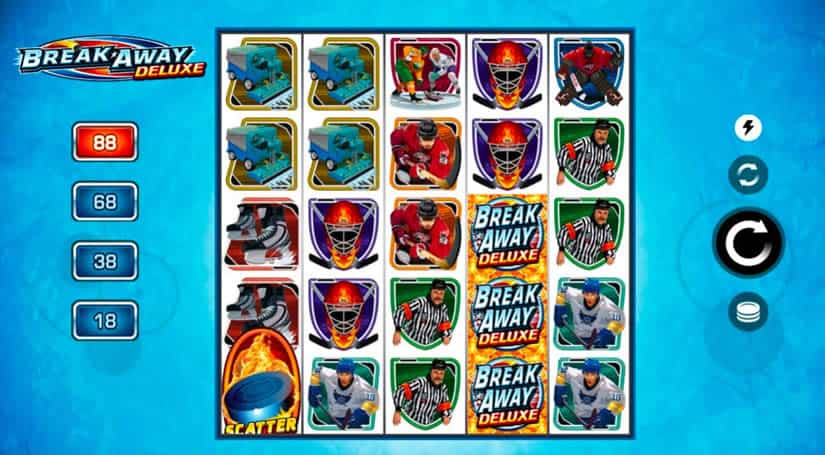 There are few simple but very effective bonus features on this slot to help put some extra padding into your bankroll. Here’s how it all works.

The paytable refers to the cascading symbols feature as rolling reels. As we mentioned above, whenever you win, winning symbols will be removed and new symbols will fall onto the reels, giving you extra chances to win more.

This feature triggers randomly during the base game. When it triggers, a hockey player will appear on the screen and turn reel two, three, four, or five completely wild for a guaranteed win. The reel will also remain wild for any following symbol cascades.

Landing three or more scatter symbols on the reels will trigger the free spins feature. You’ll be given 12 free spins to start and both growing wilds and the multiplier trail will be activated for the duration of the spins.

As in the base game, wild symbols are stacked on the reels. During free spins, however, with each spin, the stacks of wild symbols will grow by one.

You’ll see the multiplier trail to the left of the reels during free spins. It will move up by one step for each roll (cascade) triggered by a winning spin. You’ll get the following multipliers: