The Finn’s Golden Tavern slot from NetEnt is the sequel to the very popular Finn And The Swirly Spin slot. In addition to using the same starring character, it uses the same basic game mechanics, but also incorporates some new features to avoid just being a copy of the original with a new skin. Anyone who was or is a fan of the Finn And The Swirly Spin slot should definitely enjoy Finn’s Golden Tavern as well. As usual, you can find all the fantastic Netent games at most UK online casinos, but not in U.S nor Australian brands.

Finn’s Golden Tavern plays on a five by five grid where symbols move on a square spiral starting at the bottom left corner of the screen and moving into the centre of the grid. There are four regular symbols, each a different type of tavern drink, and four different coin symbols along with a wild and free spin symbol. Each time you “spin”, symbols will fill the playfield starting from the bottom left and filling in along the spiral path to the centre.

There are no traditional pay-lines on Finn’s Golden Tavern slot. Instead, wins are paid when you match any symbol three or more times, either vertically or horizontally, anywhere on the playfield. After a win is counted, the symbols making up the win will be removed, remaining symbols move forward along the spiral, and new symbols come in from the beginning giving chances for several extra wins on the same spin. There are never wild symbols present on the initial spin, but each time symbols are removed for a win it is possible that one or more wild symbols will appear.

Setting up wagers on this slot is quite a simple affair. The only option you’ll need to fiddle with is setting the value of the coins you’d like to play. The coin value is automatically multiplied by ten to set the total stake for each spin. The coin value can be set from £.01 up to £50, making for a minimum wager of just £.10 and a maximum of £500.

Yes – Why To Play The Finn’s Golden Tavern Slot 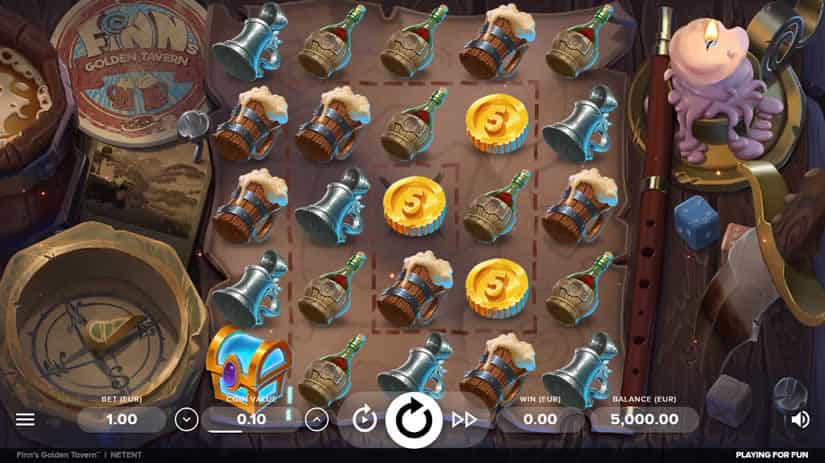 The bonus features on Finn’s Golden Tavern are not all obvious at first, but there are several there to help add some coins to your balance as you play. If you land a spin where some of them combine with each other, it can make for some significant payouts.

The fist slam feature triggers randomly under certain conditions on a non-winning spin. When it occurs, Finn will slam his fist down on the playfield and generate an automatic coin win for you.

The feature can trigger on any losing spin where there are at least three coins on the playfield with two being next to each other and the third sitting separately. When the fist slam happens, the lone coin will swap places with a low-paying symbol to match three coins in a row and generate a win.

The random coin feature is another randomly triggered feature. This one, however, triggers after winning spins. When a winning spin completes, if the feature triggers, one or two low-paying symbols will be chosen from the centre position or the ring of symbols that surround it and turned into coin symbols with random values.

The final bonus feature on Finn’s Golden Tavern is free spins. As was mentioned above, this feature will trigger an average of once every 180 spins. Here’s how it works.

At the start of every spin, the “free spins chest” will be the last symbol on the chain that makes up the spiral. If you get a win and symbols are removed, the free spins chest will move up along with the other symbols and new symbols come in behind it. The object is to get the chest all the way to the middle of the spiral, which will trigger the free spins feature. You will, obviously, need several winning matches on a single spin for this to happen.

When the feature triggers you will be given five free spins. Free spins work basically the same as regular spins but a win multiplier is added in. The multiplier starts at 1x and moves in small steps to higher numbers each time a new wild symbol appears on the playfield. You’ll need five wild symbols to move from 1x to 2x, five more to go from 2x to 3x, and so on. Needless to say, again, with only five free spins you’re going to need several winning matches on single spins to move the multiplier up before free spins run out.