The Gorilla Go Wilder slot brings back Gary the purple gorilla for another round of monkey business. In this fun sequel to Gorilla Go Wild from NextGen Gaming, you’ll find Gary hanging out on the beach sipping a cool drink under the palm trees as he watches you play. There are plenty of big prizes to be won as well as some interesting innovations that will keep players on their toes and coming back for more. Where to find it? Gorilla Go Wilder as well as other Nyx tittles are available at most UK online casinos.

Gorilla Go Wilder plays on five reels with three rows and 25 pay lines, but some features will take things all the way up to 200 pay lines. There are six low-value symbols on the reels with four high-value symbols plus wild and scatter, which also pay handsomely. Gary himself is the wild symbol with other high-paying symbols being made up of various jungle animals. The lower value symbols are playing card values nine through ace.

It’s fairly obvious that the game designers weren’t taking themselves too seriously as they put together the theme on this slot. You’ll see plenty of funny animations from ol’ Gary as he stands on the side and watches your results. He even scratches his butt sometimes when he thinks you’re not looking. Everything is colourful and cartoonish and gives off a very lighthearted vibe.

You shouldn’t have any problem at all setting up your wagers on Gorilla Go Wilder. Everything is preset, you’ll just need to decide how much you want to bet on each spin and jump right in. There are 13 wager amounts available ranging from a minimum of $.30 up to a maximum of £150.

Yes – Why To Play The Gorilla Go Wilder Slot

NextGen came up with great new twists when they put this slot together. It has your basic bonus features like wild symbols and free spins, but the designers really wanted to push things over the top.

What really makes this slot unique is the use of so-called expansion packs. As you play and trigger the scatter feature you’ll collect points that allow you to open new areas within the game. The more you play, the more new places you’ll be able to go, up to 8 different locations—so far. Making things even sweeter, each new location has its own special bonus features. So, as you unlock new places to go with Gary Gorilla, you can play with the bonus features you like the most.

The shell respins feature can trigger randomly after any regular spin finishes. One or more shell symbols landing during the respin will award another spin. Respins will continue until no more new shell symbols stop on the reels. When the feature is over, each shell symbol will award a prize. As the feature is triggered more times, symbols with higher prizes will become available at the Gorilla go Wilder slot.

If not triggered by Gary, the bonus islands feature is triggered when three or more scatter symbols land anywhere on the reels. The player will be given ten free spins which will play out with the bonus features of the island selected. As this featured is triggered more times, you’ll be able to unlock more islands where you can play. You’ll be able to unlock the islands in any order you wish as long as you’ve racked up the required points to do it. 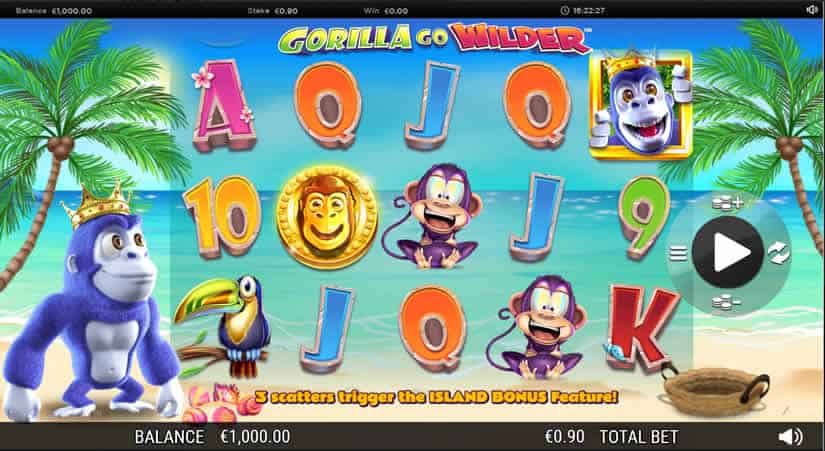 Following is a quick rundown of the available islands and their bonus features at the Gorilla go Wilder slot. The developers have already stated that more will be available in the future as well.

Crystal Cave – Mystery symbols appear on all reels and can transform into any symbol except for scatter.

Tiki Bar – All symbols except scatter payout at the power paytable rate. Match five for 1500 times coin value, four for 500 times, and three for 50 times.

Green Jungle – Any wild symbol that lands will expand to cover the entire reel.

Waterfall – All symbols on the reels except for scatter are stacked.

Scary Forest – Selected symbols may change to wild symbols on any spin.

Purple Jungle – Two wandering wilds appear on the reels and wander with each spin. If both wandering wilds land in the same place, any win that includes them will be multiplied by ten.

Sunset Beach – A multiplier zone will appear on the reels, covering up to 15 symbols. Any wins that involve symbols within the zone will be multiplied up to 25 times.