The Jungle Books slot from Yggdrasil is one of the most unique video slot machines that any company has released. It is a highly polished 3D design based on characters from Rudyard Kipling’s 1894 story collection “The Jungle Book”. For those who didn’t know, the story of the “man-cub” Mowgli and other characters that appear in the Disney animation and books are not Disney originals, which is why Yggdrasil can release this game without fear of copyright infringement.

Strangely, you won’t see a single one of the characters on the reels. They do appear, however, in beautifully detailed renderings beside the reels, granting various bonuses as you play the game. The game itself is somewhat hard to describe in a linear fashion because much of it changes as you play.

The reels are populated by six different kinds of jungle fruits and symbols for the four playing card suits. This is a five-reel slot, but the number of visible rows can change from three to four on different reels depending on which of the Jungle Book characters is active (more on that below). It is a fixed pay line slot, but again, the number of pay lines can change from 58 to 68 depending on what’s happening in the game.

Best Yggdrasil Casinos to Get Started:

Jungle Books comes with many different bonus features and a pretty unique way of integrating them into the game. They all occur randomly and switch fairly frequently, so gameplay is always changing.

The basic logic behind the bonus system relies on five characters from the Jungle Book. Each character has their own realm within the game and two special effects they can use to alter how the game plays. One character is always on the screen, but two characters can be present at the same time.

When two characters are present, the one who is within his realm will act as the host and contribute both of his effects. The other character acts as the guest and will add one of his effects. So, there will always be at least two effects active with the possibility of combining three. 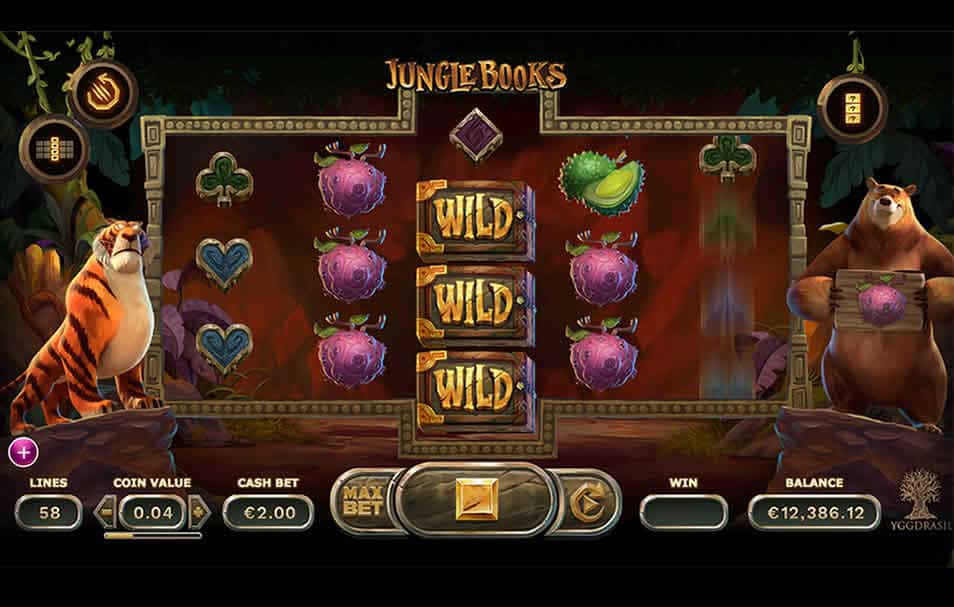 When the Boy is present as the host, the reels take on a 3-3-4-3-3 visible row layout with 58 pay lines. His effects are synced reels and spreading wilds.

When the Tiger is present as the host, the reels take on 3-3-4-3-3 visible row layout with 58 pay lines. His effects are sticky respins and stacked wilds.

When the Bear is present as the host, the reels take on a 3-3-4-3-3 visible row layout with 58 pay lines. His effects are stacked symbols and the honeycomb.

When the Panther is present as the host, the reels take on 4-3-3-3-4 visible row layout with 68 pay lines. His effects are wild superhigh pay symbols and win multipliers.

When the Snake is present as the host, the reels take on a 3-4-4-4-3 visible row layout with 68 pay lines. His effects are Win Both Ways and 3x Wild Multiplier.

As soon as you see the Jungle Books slot, it’s evident that a lot of thought went into the design of the game from both an audiovisual standpoint and a game mechanics angle. The graphics and sounds are both beautiful. There is a very high level of detail in everything visual. The gameplay and integration of the bonus features are also very unique and creative.

The fact that all but one of the bonus features are completely non-interactive makes it feel a bit like something is missing. The frequently changing scenes, characters, and bonus features, though, should hold your interest.

The Jungle Books slot is definitely worth some play time. I’m sure that it will find its way onto the favourites list of more than a few of you out there.

If you are looking for a game with interactive bonus features, you may want to try Treasures Of The Lamps Slot.