King Kong Cash slot is a five reel, three row, 20 pay line slot machine coming to use from Blueprint Gaming. As you might imagine, there’s plenty of monkey business going on in this game as you spin the reels. King Kong himself snoozes on his throne as you do your best to win his jungle prizes. On the reels, you’ll find rhinos, tigers, parrots, and alligators accompanied by the high card symbols J, Q, K, A, as well as scatters and wilds.

There are tons of ways to win on this cartoon style video slot. All wins are from the left and pay for matches of two, three, four, or five symbols. There’s also a load of bonus features to keep things interesting. The maximum win in the base game is 500 times the line bet. When the bonus features kick in, the overall maximum win for King Kong Cash is £250,000 or 10,000 times your bet, whichever comes first.

Betting options should fit the tastes of a variety of players. The minimum wager is just £.20 and the maximum tops out at £500. The theoretical return to player (RTP) on this slot is 95.79%, which will give players plenty of value for their investment. 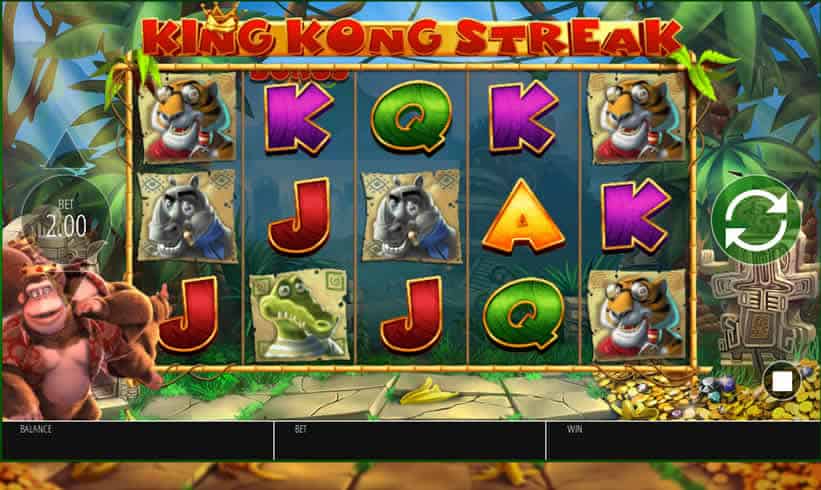 Best Nyx Casinos to get Started

Even if some of the bonus features might be difficult to trigger, there are plenty of them available to keep things interesting and possibly add some truly tremendous padding to your bankroll.

As I mentioned above, King Kong sleeps on his throne as you spin the reels. Although he seems to be out cold, there is a random chance that he will awaken during a spin and reward you with one of the following bonuses:

Kong fires a banana cannon at the reels which will place sticky wilds in random positions over the symbols. Sometimes he will also jump up and smash the ground when the reels stop to cause a respin, holding the wilds in position.

Kong will jump up and hit the reels with a wooden mallet after they have stopped. The winning symbols that triggered the bonus will be held in place and respins will continue as long as the win is improved on each spin.

This one is similar to the golden barrel super spin, but instead of adding golden barrels, King Kong adds more bonus symbols to the reels, significantly increasing the chances that the bonus round will be triggered when the reels stop. 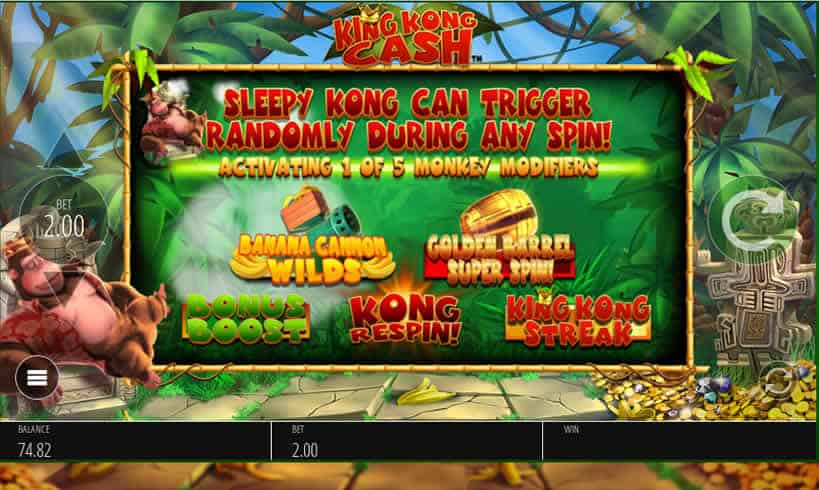 The bonus round feature of the King Kong Cash slot is triggered by getting three or more bonus symbols on the reels in any position. When this happens, the player will be presented with a wheel to be spun that will determine the bonus feature he will experience.

A number of barrels will be presented on the screen that the player will have to choose from. Each item will match a total bet multiplier, which will be paid if three of the same are uncovered. Additionally, there is a special icon hidden in the barrels that will upgrade the multipliers. If the player collects three golden monkeys, he will be awarded the big money bonus.

This bonus game has two stages. Stage one is multiplier trail up the levels to the King Kong Cash Big Money Bonus. The players must select barrels to increase the multiplier and advance up the trail. The player can select barrels that will either advance him between one and five spaces up the trail, award a golden monkey which will take the player directly to the second stage, or contain a bomb that will end the bonus game. If the game ends, the player will be paid the bet times the current multiplier.

The second stage — the big money bonus stage — puts King Kong himself in the centre of the screen, surrounded by barrels with rows of bananas on both sides. The barrels will spin and award a bet multiplier. The player will then be asked to pick a banana. The banana will either contain a golden monkey, which will respins the barrels and add to the multiplier, or a bomb, which will end the round and pay out the current bonus.

The player will start at the bottom of the Empire State Building, which now has different sets of reels at different levels. The player must collect golden monkeys on each set of reels to move up to the next. As the player moves up the building, the rewards get bigger. More free spins are also awarded each time the player completes a level.

When the Golden Kong free spins are triggered, the game transforms and adds another row to the reels, making it a 5×4 grid and doubling the pay lines to 40. A “wild bank” will be presented on the right side of the screen where the player will collect wilds during these free spins. Any wilds that land on the reels during the free spins will increment the number in the wild bank.

After the initial free spins are done, the player will be given the opportunity for special wild spins. The reels will be spun with the accumulated wilds from the wild bank placed randomly on the reels. After each spin, the player will be presented with three barrels to choose from. Choosing a golden monkey will award another spin with the wilds reshuffled. Choosing a bomb ends the round and pays out the current bonus.

Overall, King Kong Cash slot is fun to play. The look and feel of the game is cartoonish and fun. Those who grew up playing any of the Donkey Kong games will undoubtedly see some similarities.

The variety of betting options makes this slot suitable for all levels of play, and the respectable RTP and chance for big payouts are attractive too. It’s going to come down to a matter of personal taste as to how long you’re willing to play before you see some big bonuses and payouts. I made several hundred spins and didn’t get lucky enough to trigger the bonus wheel, but did see quite a few of the random King Kong awakenings.

I have a feeling many players might find they get a little too bored waiting for something big to happen. The game is definitely worth checking out though. This one is right there in the middle. It’s not an instant no, but not an instant yes either. It all depends what you want out of a slot machine. If you want a lot of bells and payouts, you might not like it. If you like a wide variety of bonus features, you might just love it.