This is a bit of a cheeky one from Genesis Gaming, basically cashing in on the entire Age of the Gods slot series from Playtech. But that does not make this a bad slot, in fact it is more than decent as you would expect from a lesser known but definitely quality provider like Genesis!

Experience the power of Olympus, with a pantheon of mighty rulers and a storm of features!
Olympus is a sensational All Ways Pays game packed with bonus features. 3 or more scattered Shield symbols trigger a choice of up to 5 features, which are progressively unlocked during the game. Any normal spin may also trigger the potent Thunderbolt Feature, turning up to 5 reels Wild. Venture into the realm of Olympus for massive features and divine wins!

Goddess of Love Feature
Aphrodite awards 15 free spins with all prizes tripled!
Underworld Feature
Hades guards 20 free spins. He may conjure Purple Lightning onto reel 3, which acts as an additional Wild and replicates itself around the reels!
Queen of the Heavens Feature
Hera awards a massive 25 free spins with Wild Multipliers. Any win will trigger a x2 or x3 win multiplier overlaid on random symbols on reels 2, 3 or 4, or both multipliers may appear to award x6 wins!
Poseidon Feature
The tempestuous god of the sea will morph any winning symbols after pays are awarded, to be replaced by new symbols. A prize multiplier builds up for successive wins from the same spin!
Power of Zeus Feature
Any retrigger during the Power of the mighty ruler of the Ancient Gods adds 3 extra free spins and advances play to higher stages, adding Lightning Wilds to all positions progressively on reels 5, 4 and 3! 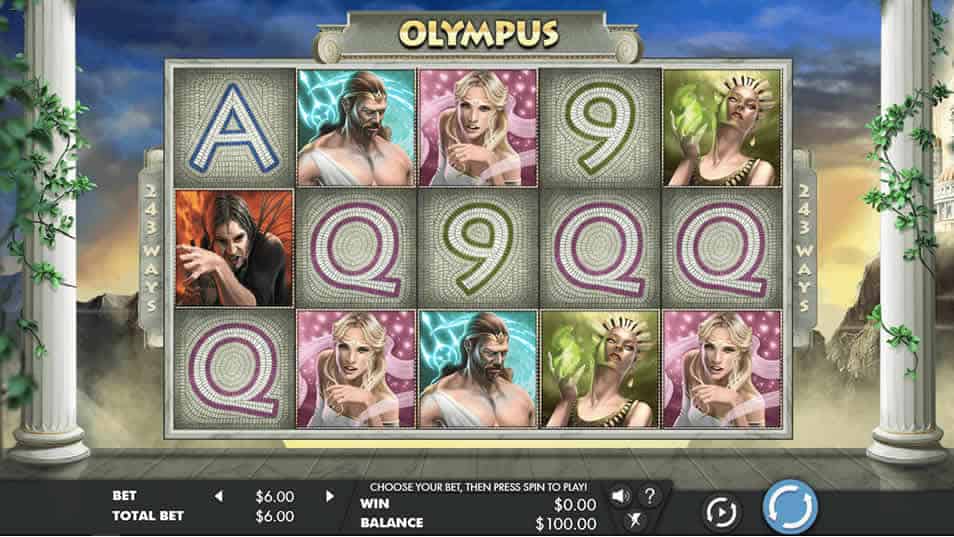