Age of the Gods slot series by Playtech is a progressive jackpot slot suite developed to replace the ageing Marvel jackpot slot suite (partly to bring them up to date, partly enforced by Disney who have not extended any online gambling related licenses beyond the current deals). Unless you have been living under a rock you will have at least heard of the Marvel jackpot slots. These are very highly regarded as the ultimate on online progressive jackpot slots and have been the flagship for Playtech for many many years.

Having 4 jackpots in one and having them play able through dozens of different slots on hundreds of websites means the jackpots drop regularly (the smallest drops every 5-15 minutes) and you don’t need to bet large to win one of these, I have grabbed a few of the two smallest jackpots with bets of just €0.25 per spin!

More info about the Age of the Gods Slot Suite

The Age of the Gods jackpot slot suite is already linking to the very same progressive jackpot network and will over the course of 2016 take over completely with the Marvel jackpot slots being consigned to the annals of history and become the stuff of legend. But a new star is born and the early signs are that the Age of the Gods slots are going to take over with a bang and firmly bring Playtech back to the top table.

We are going to be reviewing every single Playtech casino Age of the Gods slot release in turn upon release but for this page we really wanted to provide you with a one stop shop overview. First of all I want to get the RTP data up for you in a handy top to bottom overview. This RTP data will be kept up to date with any new releases and information. Don’t forget that 0.99% of your stake goes directly toward the progressive jackpots, which is actually a pretty low amount compared to some but this is possible as I say because of the number of jackpot slots linked together across the Playtech network. 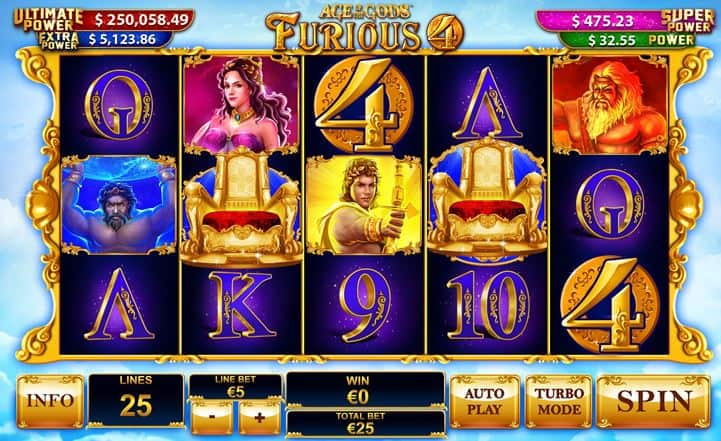 The Theoretical Pay-out percentages (RTP) of all the Age of the Gods Jackpot Slots (from high to low):

Age of the Gods jackpot system:

If you don’t already know the rules of the Age of the Gods jackpot system then here they are in all their glory (and don’t forget it really IS possible to win these with minimum bet as I have experienced first hand a number of times):

Age of the Gods Jackpot – How it works

This game is linked to the Age of the Gods Jackpot, which shares the same pot as the Marvel Jackpot.

4 Jackpots to be Won!

The jackpot game screen shows 20 face down coins. Clicking on a coin will reveal one of four jackpot symbols. Each jackpot symbol corresponds to one of the four progressive jackpots. Once three matching symbols have been revealed, the corresponding jackpot level will be awarded. The jackpot winnings are added to the main game winnings (if any) and are displayed in the Win field together with any other winnings.

The Age of the Gods Jackpot game has a timeout timer. If a matching set of coins is not revealed by the player before the set amount of time elapses, coins will be revealed automatically and the corresponding jackpot will be awarded.

The Age of the Gods slots detailed:

As I have said, we will be reviewing each of the Age of the Gods slots separately as well so for this page we will just give a brief overview.

Age of the Gods slot 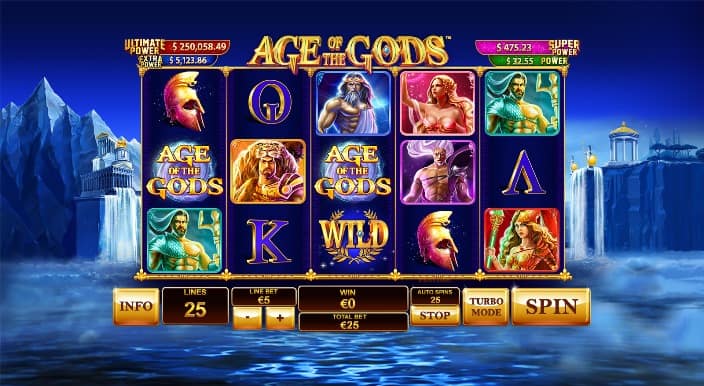 Age of the Gods is the flagship slot from this series and is based on the hugely popular The Avengers slot. With a base game Pantheon of Power bonus and 4 different free spins games which are re triggerable, this is a beautiful and fun slot. My best win on The Avengers slot was just over 750 times my stake when the free spins just kept being re triggered so we can expect the occasional huge win from this new incarnation too. 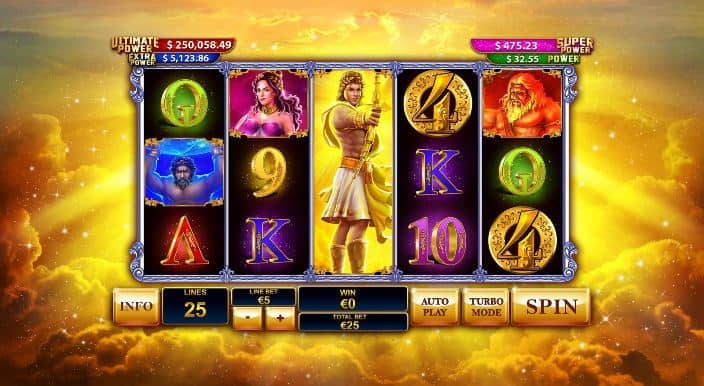 Now the Furious 4 slot is based on the brilliant Fantastic Four jackpot slot which was always one of my absolute favourite of the Marvel jackpot slots. The excitement is all in the free spins round where it is possible to activate extra free spins and any of 4 very cool special features. I had to go through the full instructions to figure out exactly how the Invisible Girl bonus worked before but thankfully in this gorgeous upgrade the designers have made everything a little bit clearer and more obvious.

Furious 4 is definitely one of the most enjoyable slots I’ve ever played and of course it would be nicer to have a slightly higher RTP but I think Playtech really got the balance right here. 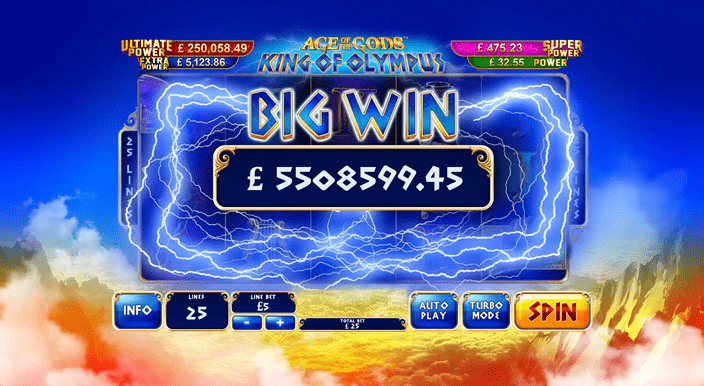 Age of the Gods Zeus was the working title before they released this slot as King of Olympus. So obviously it features Zeus as the main character. This is the upgraded version of the Marvel Iron Man 2 slot which doesn’t have many frills during the base game but in the free spins feature you receive on central sticky wild and a multiplier which starts at 2x and rises incrementally every 2 spins to 6x multiplier.

Battle of the Gods slot 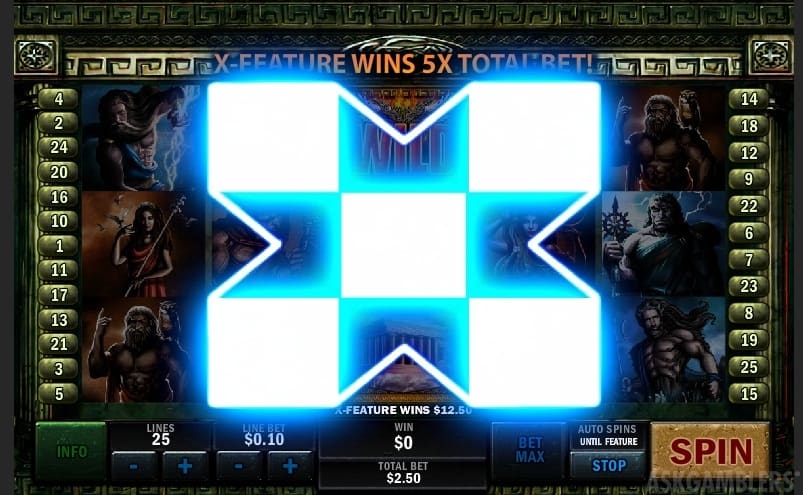 Battle of the Gods slot is not technically a part of the Age of the Gods slot suite but it is surely the inspiration or a trial run for the new jackpot slots. Released a few years ago now, Battle of the Gods is a clone of the Marvel X-Men jackpot slot and certainly fits in with this new suite of Godly slots from Playtech. As yet though it is not a part of the jackpot network and we are awaiting confirmation from our contacts at Playtech on whether or not they will be including this slot or not. Being the X-Men replacement it seems logical to us that they would incorporate it.

About the slot itself though, now X-Men was one of our least favourite of the Marvel slots, it didn’t pack the excitement of some of the others and though with potentially infinite free spins there were some good wins to be won, it felt slightly laboured at times. The Battle of the Gods version was even less appealing due to the theme being a bit too dark and dingy and the different characters not coming out too clearly and obviously. Perhaps Playtech may want to freshen this slot up with a new skin and differentiate more clearly between the good and the evil gods? That would seem a good move to me anyway and really fit it in closely with the new jackpot slot series? I’ll keep you posted when I have more news. 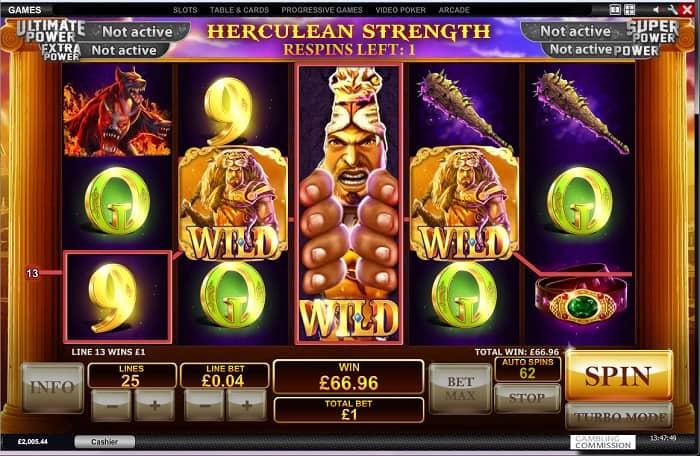 Age of the Gods Prince of Olympus features Hercules and is the brand new incarnation of the Hulk jackpot slots. While the Hulk has looked very dated over the past couple of years, Prince of Olympus has absolutely nailed it and looks stunning. The lower variance on this slot compared to some of the other Age of the Gods jackpot slots means this slot is going to have a very broad appeal and quite rightly so. The Hulk slot was never a favourite of mine but this Prince of the Gods is definitely going to get a lot more love from me. It is a big winner. 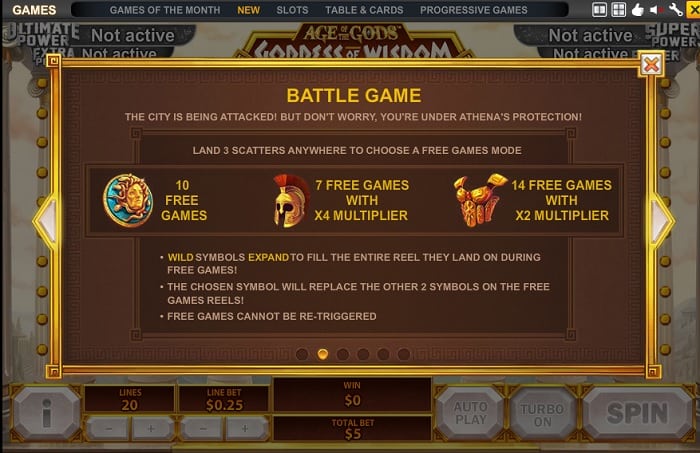 Age of the Gods Goddess of Wisdom features Athena and is modelled on the Marvel Elektra slot. A strange choice as Athena represents the Captain America role in the Age of the Gods headline slot. And while Captain America would have been more feature packed than Elektra, there are merits in choosing her for this slot remake. A better RTP and a potentially huge free spins bonus round with multipliers, merged symbols and expanding wilds. We would still like to see a Captain America remake but there’s definitely something to this Goddess of Wisdom slot. 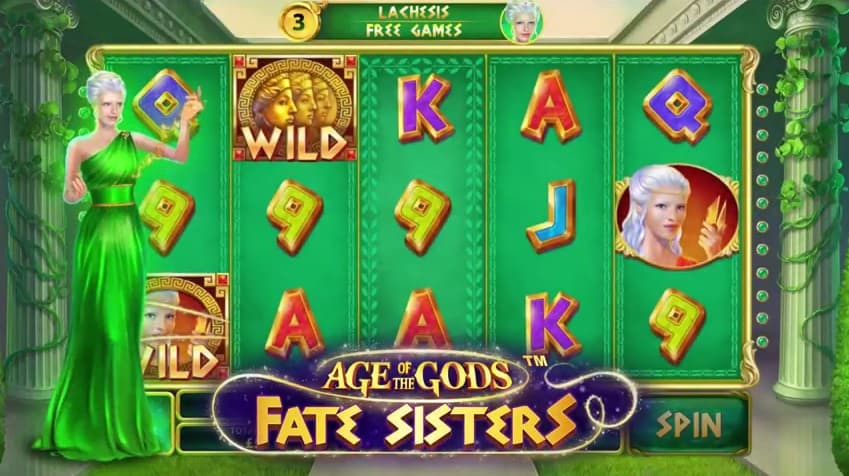 The Fate Sisters is the remake of the Iron Man 3 Marvel slot. This was never one of my favourites because despite having some innovative features and a good choice of free spins features, the RTP just seemed to be a little too low, leaving the slot capable o going thousands of spins long without really giving any decent wins.

Age of the Gods Roulette

I’m not really sure how much I need to say about Age of the Gods roulette. It is a like for like remake of the Marvel roulette casino game with the same RTP and game play. Fans will enjoy this game and having the progressive jackpots available is always a plus.