The One Armed Bandit slot from Yggdrasil is a wild west themed slot that doesn’t look like much at first, but really delivers some great gameplay. We’ve become somewhat accustomed to intricate graphics and animations as well as complex game mechanics from Yggdrasil, but this time the Norse design crew decided to go in a bit of a different direction. It might not be as visually over the top as some of their other slots, but it is still, by all means, the high quality and thoroughly exciting gaming experience that we’ve come to expect from this top online slot developer. Where to find it? Usually you can find Yggdrasil slot machines at most online casinos catering to UK players – and other European countries.

The One Armed Bandit is a five-reel, three-row slot that plays on 20 fixed pay lines. You are a wild west sheriff looking to put an end to the lawless career of the one armed bandit and his gang of outlaw cohorts.

Along the way, you’ll come across a collection of four high-paying and four low-paying symbols plus wild, scatter, and bonus symbols. High-pay symbols include your common cowboy gear such as guns, a whiskey flask and spurs. Low-pay symbols are made up of the four playing card suits. You can win as much as 80 times your bet for landing five of a kind of the sheriff’s six-shooter.

There are plenty of bonus opportunities built into this slot and they’re not all that hard to trigger, either, which adds a constant level of excitement and fun to it. Players should most certainly feel like they’re getting their money’s worth as they play.

Yes – Why To Play The One Armed Bandit Slot 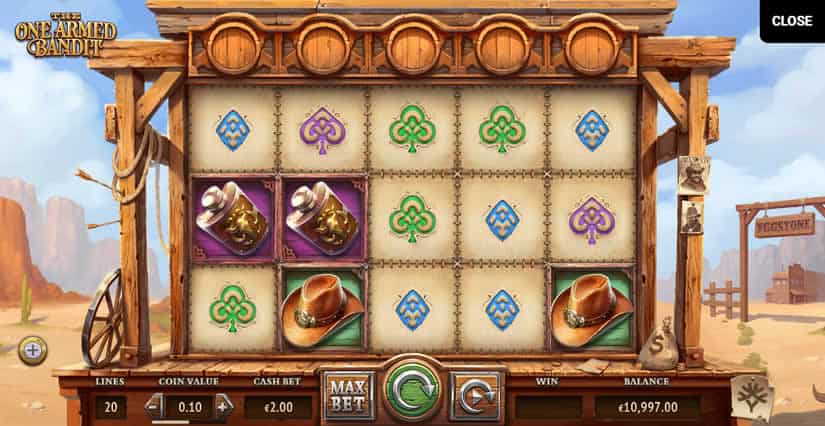 The bonus features on One Armed Bandit don’t get too complicated, but they can certainly stack up to create some colossal payouts when you get lucky. It all starts with the scatter symbol.

If another scatter symbol lands during a respin, then an additional respin will be awarded. The respins will continue until no more new scatter symbols stop on the reels.

During the respin feature, a sheriff’s star will be placed above each reel where a scatter symbol has landed. If you get a star above all five reels you’ll be awarded ten free spins. If you happen to land more than five scatter symbols before the free spins start, you’ll also get one extra free spin for each one over ten.

During the free spins, there is a base multiplier of 5x on all wins that can be increased as high as 20x. There are also wild symbols on the reels with an additional 5x multiplier.