The PopRocks slot from Yggdrasil is the first in what will surely be a highly successful series of online video slot machines to use the company’s new PopWins game mechanics. With a gorgeous theme and unusual new ways to win that can result in big multipliers and outstanding payouts, Yggdrasil has released a game that will undoubtedly spawn many lookalikes in the near future—and we think that’s going to be a very good thing!

PopRocks starts out looking like a standard five-reel, three-row slot. After just a few spins, however, you’re going to see that it’s something quite different. Rather than standard pay lines, PopRocks uses the “ways to win” payout system. To get things started, instead of giving you 243 ways to win, which would be the standard for a five by three slot, this one will pay you for combinations starting from right to left as well as left to right. So, you end up with 486 ways to win.

The “rocks” mentioned in the name are sparkling jewels. As you make your spins, you’ll see 13 different symbols plus an elusive, but very valuable, wild symbol. There are nine rocks on the reels with one of super high value, four of high value, and four of medium value. After that, you have five low-value symbols that are made up of jewelled versions of the playing card values ten through ace.

What really makes the PopRocks slot something special is the new PopWins feature. It’s sort of a new twist on the cascading symbols concept that has become rather popular. With the PopWins system, however, you don’t just get new symbols added to the reels after each win, you get more symbols added. To be more precise, for each winning symbol that pops off the reels, two new symbols will be added in its place. When a new win is created, the process repeats and then continues until no new winning matches occur.

Making things even more interesting, as winning symbols pop and new symbols are added, the number of ways to win goes up and there is a win multiplier that increases for every seven symbols that pop. Each reel will expand independently according to wins and replacement symbols.

Each reel can reach a maximum of seven rows and it’s possible to get up to 33,614 ways to win. When all rows are fully expanded, winning combinations will result in wild symbols being added and the multiplier will increase by two steps at a time. If everything goes right, it’s possible to win up to 72,188 times your bet!

Setting bets on PopRocks is not going to be any trouble. Each bet counts as 25 coins and the single coin value is used to determine your win amounts. The overall bet is set by simply selecting from one of the preset amounts built into the game. You can play for as little as £.10 per spin and the maximum is £10.00. 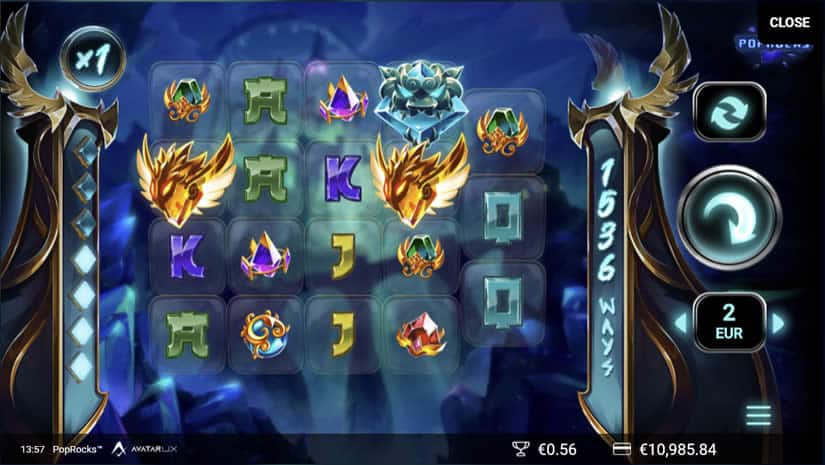 Yes – Why To Play The PopRocks Slot

As fun as this game is, the only real bonus feature is the incorporation of the PopWins game mechanics. Wild symbols don’t appear during regular spins and there are no free spins. Here’s a breakdown of how it all works.

The PopWins feature is triggered every time you make a winning spin. When you win, all winning symbols will pop and be removed from the reels. For each one that pops, two new symbols will appear, adding a new row to the reel(s) in the process. If another winning combination is created, the process will repeat. The PopWins feature continues to repeat until no more winning combinations appear.

All reels can expand up to a maximum of seven rows. When all five reels have expanded to seven rows, wild symbols will unlock and begin to appear if winning combinations continue. At this point, popped symbols will only spawn one new symbol and the multiplier value will jump by increments of two instead of one.