Did you hear about the 243 ways to win slots feature? Stay with me while we go over this new type of slots that are conquering the market.

The slot machines we play today are certainly not the same as the originals. Many things have changed since the beginning, especially when electronics and video screens came onto the scene. One of the biggest and most obvious innovations to occur was the addition of multiple pay lines.

The first slot machines had just a single pay line. As manufacturers tried to attract more players to their machines, we gradually started seeing more and more pay lines appear. First, there were three straight pay lines instead of one. Then designers introduced chevron and zig-zag shaped lines. Suddenly we were seeing slots with 10, 20, 30 and even 50 pay lines.

One would think that there wasn’t much more you could do to improve on such a simple game, but then it happened. 243 ways to win slots appeared. These new slots somehow did away with pay lines and increased the number of pay lines simultaneously. 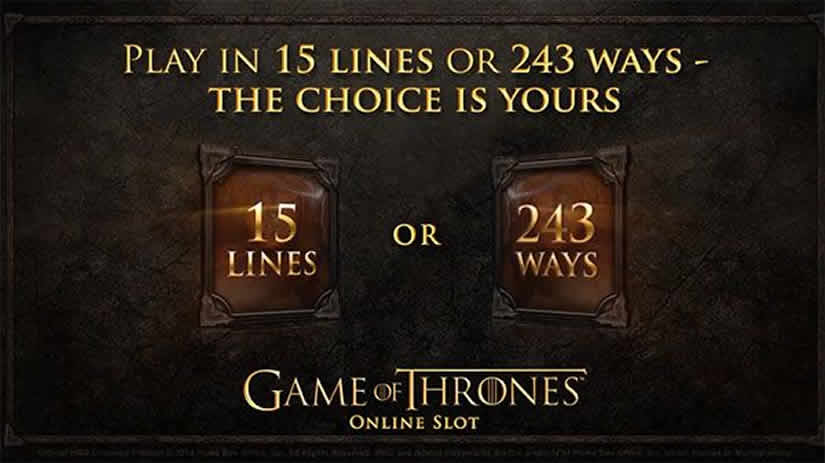 The basic idea behind 243 ways to win slots is that they abandon the concept of traditional slot machine pay lines and consider any combination of matching symbols a win so long as they appear on adjacent reels, starting from the first, going from left to right. If you do the (somewhat complicated) math for a five-reel, three-row slot, that gives you 243 ways to create a winning combination, hence the name.

Whether these machines have pay lines or not depends on how you look at it. On one side, this type of slot machine has no pay lines. Looking at it another way, there are 243 pay lines that cover every possible combination of matches. However you choose to look at it, they still provide many more ways to win than any slots with traditional pay line configurations.

Some descriptions of these slots say that this configuration basically turns all of the symbols on the reels into scatter symbols. This is completely incorrect. On most slots, scatter symbols do not need to appear on adjacent reels. On those that do require them to be on adjacent reels, they often don’t start on the first reel.

243 ways slots give players much more value for their wagers than traditional slots with fixed pay lines. Most 243 ways slots allow players to bet as little as ten coins on each spin whereas conventional pay line slots require one coin for every pay line you want to activate. It’s not hard to see that playing a 20, 30, or 40 pay line slot is going to require two, three, or four times more money to be wagered on every spin if you want to activate all the pay lines.

243 ways slots also make it much easier for the player to see when they win and should be paid. No matter how much you trust a slot, when there are 30 or 40 scrambled pay lines across the screen, there’s always that little voice in the back of your mind saying that maybe not all of your wins are being counted. Since any match from left to right is a win on a 243 ways to win machine, there’s no guessing if you hit one of the crazy pay lines or not.

Where To Find 243 Ways To Win Slots

Online gaming provider Microgaming is largely considered to be the pioneer of the 243 ways to win concept with online slots. They were the first online provider to really push these slots out to players and see their popularity growing. Other game designers like NetEnt and Play’n Go have put out their own 243 ways to win slots, but many say those designed by Microgaming are still the best.

If you’ve never played a 243 ways to win slot and would like to check one out, you can’t go wrong with Robin of Sherwood, Amazing Aztecs, Sizzling Spins, or Fairytale Legends: Mirror Mirror. You can also take a look through our online slots review section to find more.