Fairytale Legends Mirror Mirror is the third video slot in the Fairytale Legends series from NetEnt, after Hansel and Gretel and Red Riding Hood slots. If you know your childhood fairy tales, you should have already figured out that this slot is based on the tale of Snow White from the Brothers Grimm. Like the other slots in this series, the characters are presented in cartoon form, and the game is packed with bonus features to keep your bankroll bouncing.

The Fairytale Legends: Mirror Mirror slot follows the 243 ways to win design, so there are no straight pay lines. Wins are based on same-symbol combinations matching from left to right on adjacent reels. Among those symbols, players will find the Fairytale Legends logo, the evil queen, and, of course, Snow White herself. Lower paying symbols include the playing card values 9 through A.

Best NetEnt Casinos to get Started

There are plenty of bonus features in this slot that can trigger both randomly and from landing certain combinations on the reels. As you discover the features, you’ll run across the magic mirror, magical fairies, and even the seven dwarfs as they work in their mine. Three features can trigger randomly in the base game as well as three features that can be triggered by landing three bonus symbols on the reels.

This feature triggers randomly. When it is activated, the fairy will appear and place between five and seven of the same medium paying symbol over the reels for one spin.

The Fairy Surprise feature triggers randomly on a losing spin. In this case, the fairy will randomly select one medium win symbol from the reels. Starting with the lowest paying symbols, she will change them to the selected symbol until a winning combination is formed. 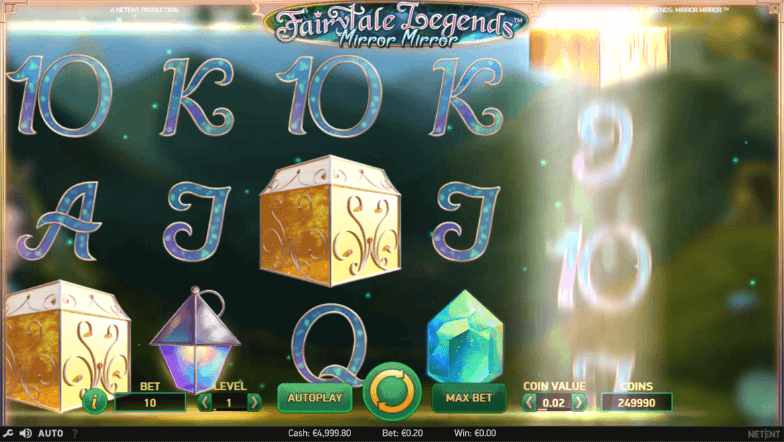 The Fairy Mirror feature can also trigger randomly. When this happens, a fairy will appear and place the mirror symbol on the third reel and the above sequence will play out.

Bonus symbols — golden boxes — can appear on reels one, three, and five. When three appear on the screen, the player will have a chance of entering one of three bonus features listed below.

In some cases, on a losing spin where bonus symbols have landed on reels one and three, the third symbol may randomly be placed on reel five to complete the bonus sequence.

When the mining bonus is activated, the player will be taken into the mine where the dwarfs are working. There are nine crystals in the mine that the dwarfs will help you get. The player can pick one crystal at a time until the dwarf’s pickaxe breaks. Each crystal grants a coin win between 50 and 500 coins multiplied by the current bet level.

The free spins bonus is very straightforward. If this feature is triggered, the player is awarded ten free spins at the current coin value and bet level.

The coin win bonus is also very easy to understand. When coin win is triggered, the player is awarded an amount equal to 15 times the current bet.

The Fairytale Legends Mirror Mirror slot machine is a solid addition to Net Entertainment’s Fairytale Legends series. Like the others, this online video slot is well designed and a lot of fun to play. Payouts may not seem high compared to some other recently released slots, but the more consistent wins of this lower volatility slot do a lot to keep excitement levels high.

This slot is definitely worth checking out. If you haven’t already seen them, you should also take a look at the other two slots in this series: Fairytale Legends Red Riding Hood, and Hansel and Gretel.