The Fairytale Legends: Red Riding Hood slot comes to us from prolific video slot machine creator NetEnt. Based on the Red Riding Hood fairytale that we’ve all heard as children, this slot features storybook themed symbols on the reels and a wealth of bonus features that will keep even the most seasoned slot player excited and entertained.

Storybooks, golden keys, perfect roses, and royal shields are just a few of the symbols that will spin by on this five-reel, three-row machine. Twenty fixed pay lines allow for plenty of winning combinations, but it’s the big bonus features that will deliver the high payouts everyone is after.

Betting options for Fairytale Legends: Red Riding Hood are very flexible. Players can set the coin value as low as €.01 and as high as €1.00. It is then possible to wager anywhere from one to ten coins on each pay line. That gives us a minimum bet of €.20 per spin and a maximum of €200.00!

Best NetEnt Casinos to get Started

Packing as much as possible into this slot, NetEnt gives players no less than seven different bonus features. Triggering some of them can seem difficult, but the payoffs can be worth the wait when one of them finally hits.

If another wild symbol appears on the reels during a sticky wild respin, an additional respin is awarded. Respins will continue until no more wild symbols appear. Sticky wild respin wins are added to the prize from the initial spin. 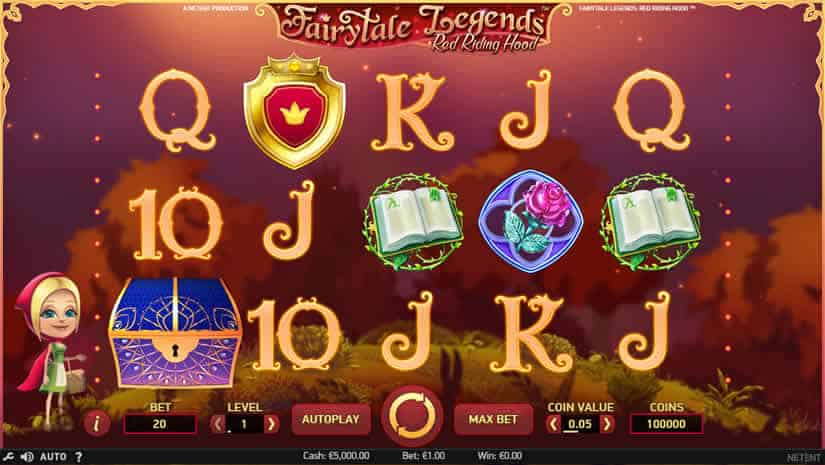 The Fairy Magic Spin is a random feature that can occur at any time during the main game. When it triggers, a cluster consisting of five to nine medium win symbols (except for the game logo) will appear over the reels for one spin.

The Fairy Surprise is another random feature that can trigger in the main game after a non-winning spin. When this feature triggers, a random medium-win symbol is selected from the symbols appearing on the reels. Other symbols will begin changing into this symbol until a winning combination is formed.

Bonus and wild symbols cannot be selected during this feature.

The Fairy Wild Spin is another random feature. When this feature triggers, a fairy will appear and place three or four wild symbols on reels two, three, and four during the spin. After the reels stop, all wins are paid out and a sticky wild respin is awarded. Then the feature continues with the same rules as the Sticky Wild Respins mentioned above.

If the player is awarded the coin win from the bonus chests, a prize of fifteen times the bet is paid.

If two or more wild symbols land during free spins, a sticky wild respin will be awarded. If one, two, or three bonus symbols fall on the reels, two, four, or ten additional free spins will be awarded respectively. 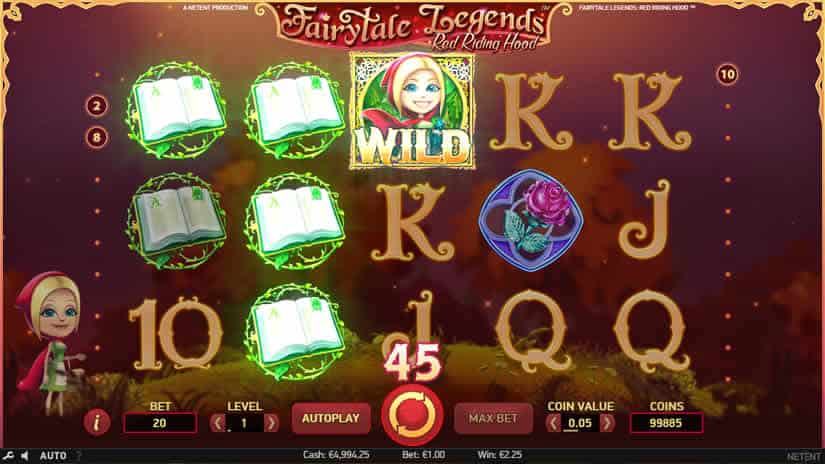 When this feature is activated, the player is taken to a board game style mini-game. The player will start at position 0 and click the screen to spin a whirligig and move along the board. There are multipliers ranging from one to twenty times the current bet.

As the player moves, he can land on one of five different types of locations: coin win, double, arrow, jackpot coin win, and collect.

Coin Win – The player is awarded a coin win consisting of the current bet multiplied by the multiplier for the location he has landed on.

Double – All multipliers in the bonus game, including the jackpot coin win, are doubled. This does not affect coins already won.

Arrow – On the next move, the player will move along the arrow.

Collect – The Beware The Wolf bonus ends and the player collects the current coin wins awarded up to that point.

The Fairytale Legends: Red Riding Hood slot is undoubtedly fun to play. The random features during the main game trigger often enough to keep the player’s attention, but the real bonus features are somewhat difficult to trigger. For those who really like to be able to hit the bonus games repeatedly, this one might get frustrating.

The range of betting options makes this slot a good fit for those looking to play low or high. It also has a good return to player rate of 96.3%, which will give players good value and play time for their money. For those who can take the ups and downs of a high volatility slot, Fairytale Legends: Red Riding Hood is worth checking out.