The Respin Rhino slot is a five reel, four-row slot developed by Lightning Box and brought to the online gambling community by NYX Interactive. Respin Rhino comes with fixed 40 pay line video slot with sharp, crisp, and colourful graphics. The soundtrack is a bit unimaginative, resembling the simple music, clicks, and beeps that have long been common in land-based slot machines. It’s nothing so bad as to turn anyone away from the game though.

The symbols on the reels in this game are very well drawn, going more for realism than the cartoonish look of so many animal-themed slots (Buffalo Grand and Little Panda for example). Among them you will find birds of prey, baby chimpanzees, white tigers, elephants, a dancing African princess and, of course, rhinos. As you can tell by the name, Respin Rhino offers a respin bonus features, but not much more. 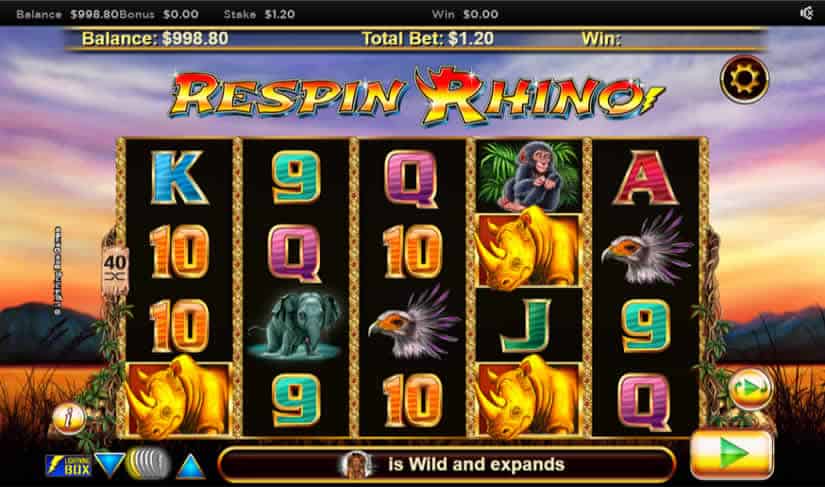 Best Nyx Casinos to get Started

There are basically two features in Respin Rhino to help you raise your win rate and put more cash in your bankroll. There are expanding wild symbols, and, of course, the Rhino Respins.

Understanding the expanding wilds on Respin Rhino is simple. If a wild symbol lands on a reel, it will expand to cover the entire reel every time. The African lady is wild and can show up on reel two or four. If she lands in any position, the whole reel will become wild and she’ll dance in delight.

The Rhino Respin feature can award the player up to nine free spins when triggered. Here’s how it works.

When this bonus feature is triggered, the player is first awarded three free respins. During these respins, all symbols on reels one and five become rhinos and are held in place. Reels two, three, and four will spin. If a wild lands during these respins, the spin counter is reset to three, and the wild symbol expands and becomes locked in place. It is possible to win a total of nine respins. 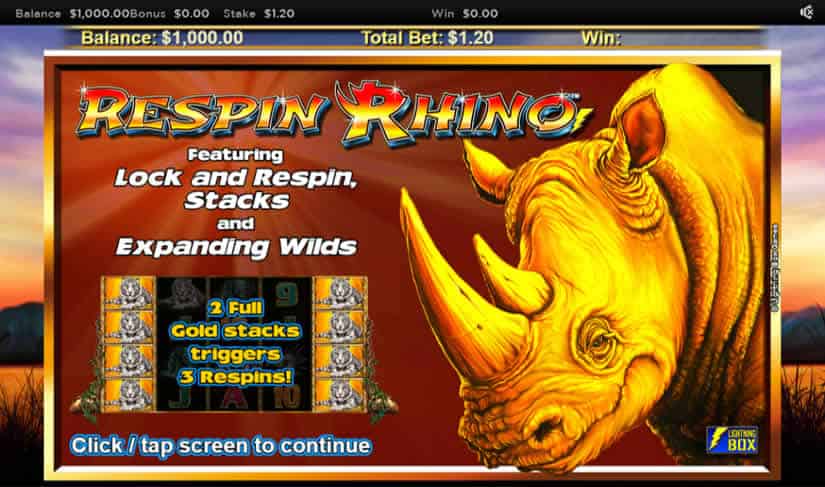 Unfortunately, the Respin Rhino slot lacks any real excitement that could make it attractive. It’s a shame, too, because the visual aspects of the game are well designed and you can see the potential for something more.

For players looking for a new slot to check out, it may be interesting to play around with for a few minutes, but as was stated above, there is really only one bonus feature in the game and it seems to be very hard to trigger. I played several hundred spins as I was writing this review and didn’t hit it once. Overall, I don’t think this one is going to make it onto anyone’s list of favourites.