The Wild Pops slot from Yggdrasil brings some exciting new fun to the screen with the usual good looks and hot animations that we’re used to seeing from Yggdrasil. The Poppins feature adds a lot to the game and not only gives you extra chances to win but increases your chances of winning with each and every spin.

The game carries an Asian theme, but of course, with a perfectly modern twist and some interesting game mechanics that make it stand apart from all the other Asian slots you’ve played before. The graphics are top-notch, crisp, and clear, and the game plays fast and smooth. You can find this slot at any Canadian online casino and also at the best UK casino brands.

The game works on a “Ways to win” system, offers expanding reels, and pays both ways. It doesn’t get much better than that when you’re talking about video slots. Everything starts out at as five-reel, three-row slot with 486 ways to win where you can win with at least three consecutive symbols on any three reels starting from the first on the left or the first on the right. There’s also a possibility for win multipliers, too, just in case that interests you.

There are six low-paying symbols on the board, seven high-paying symbols, one super-high paying symbol as well as a wild symbol. If you manage to strike the right combinations, you can end up with up to 33,614 ways to win. It’s definitely one of the more exciting games Yggdrasil has put out for those that prefer a straight slots game over something like their video-gamish series like “Vikings go to…” or what have you.

You can play by simply selecting from the preset bet amounts built into the game. The minimum wager per spin is £.20 and the maximum bet is £50.

Play the Wild Pops Slot at the Best Yggdrasil Casinos

Yes – Why To Play The Wild Pops Slot

No – Why Not To Play 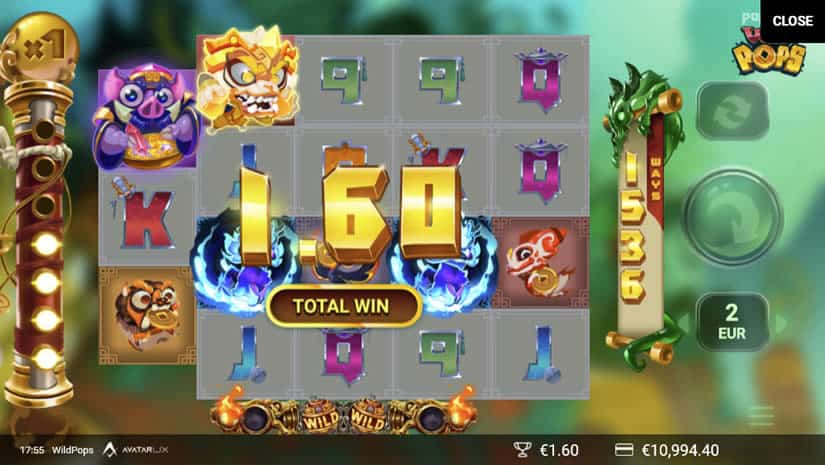 There are several bonus features on this slot that can really turn a regular win into a giant payout in an instant. Between wild symbols, pay both ways, expanding reels, and even extra lives and respins, you’ll have plenty of chances to put a bit of a bump in your bank account.

Wild pops occur whenever you make a winning combination. All symbols within the winning combination will be removed from the board, the reel or reels those symbols were on will expand, and two new symbols will appear in the place of the one that removed. If more wins are created, the process will repeat. The reels will expand to a maximum of seven rows each. For each three (3, 6, and 9) wild pop features you trigger, two wild symbols will also be randomly added to the board.

Although the reels will only expand to a maximum of seven rows, if wins continue to be created, winning symbols will still pop and be replaced. At this point, you will be given three “lives”. Each time a spin is made and no new win is created, one life will be subtracted and you’ll be granted another spin. This, of course, continues until you run out of lives.

You’ll see a multiplier counter on the left side of the reels. It will fill up as each pop goes off. For every seven pops you rack up, the win multiplier will increase by one.

As was mentioned above, the game pays both ways and starts off with five reels and three rows. You’ll have 468 ways to win. As the reels expand from pops, the number of ways to win will vary depending on how many new spaces are generated on each reel. If you get all five reels up to seven rows, however, you’ll max it out at 33,614 ways to win.