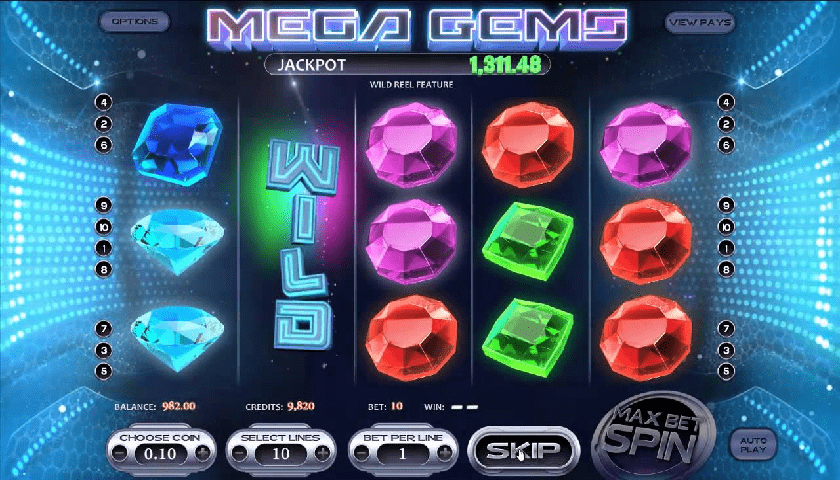 As one of BetSoft Gaming’s simpler slot machines, there isn’t a whole lot to the Mega Gems slot. You are greeted with a simple 5-reel structure which offers 10 paylines filled with various coloured gemstones. The slot has been designed in much the same manner as NetEnt’s Starburst video slot, and although that is a huge success, this one hasn’t acquired the same popularity. Mega Gems is dull at best, and sorely lacking in excitement and features.

With only 10 paylines to play with, there isn’t a lot of room to manoeuvre in the wagering department. Players can opt to choose coin values which stem from 2p up to £1, and they can wager as many as 10 of those per line. Lines are also adjustable, but with just 10 to play with, we’d leave them alone if we were you. Wagers in this slot have a floor of just 2p per line, per spin, and a ceiling of £50 per spin.

Mega Gems is a progressive jackpot slot. Before you get your hopes up, though, the top prize in this game seldom goes beyond £10,000. That is still a very handy sum to get your hands on, but you won’t like what you must do to land it. Players are going to be made to jump through hoops for this prize. You will need to land 3 stacked jackpot symbols on the second, third, and fourth reels to bag the prize, and you must be wagering the maximum bet. Talk about harsh…

Wild symbols are pretty common in the Mega Gems slot. These symbols appear as multi-coloured, hexagonal emblems. They can appear on the second, third, and fourth reels only, and can expand to occupy the entirety of those reels. Wilds can substitute for all other symbols in the game, and will trigger a re-spin feature when they occur.

Once a wild has appeared on one of the three aforementioned reels, players will land the re-spin feature. They will get to spin the reels for free to potentially bag an extra win with the expanded wild symbol or symbols in place. If you bag another wild, you will get another re-spin, and so on and so forth until all three reels are wild. If you don’t, the re-spin feature ends. At most, players can hope for 3 free re-spins with the central three reels wild. Whilst this sounds promising, it so rarely happens.
Wild symbols are a perk in this slot, and although you will enjoy the re-spin feature, it is hardly a substitute for a good old fashioned bonus round. That appears to be missing in the Mega Gems slot machine.

Mega Gems is very similar to Starburst, as we’ve said. Starburst offers larger wins, though. The wins in this game have been somewhat diminished due to the progressive prize. You aren’t likely to bag it, and even trying to do so will cost you a fortune. This is a rather poor effort from BetSoft Gaming, and not one worthy of praise, really.