Playtech Man of Steel slot is another entry into the DC Jackpot slot series and comes with a 95.05% RTP and a whole host of little bonus features.

Let’s start with the feature you will most commonly see which is the shifting wilds. Superman appearing on reel 1 will award you respins and shift one reel until he leaves the screen. General Zod will do the reverse, landing on reel 5 and shifting left. Should Superman and Zod meet each other as they shift then you will be awarded the “main” free spins feature. If you have ever played the NetEnt Invisible Man slot then you will know exactly what we are talking about here. The free spins feature can be a little confusing as the feature has potentially unlimited free spins and only ends when Superman loses a battle with either Zod or with one of Zod’s henchmen wilds. During free spins every fight that occurs awards more wilds. 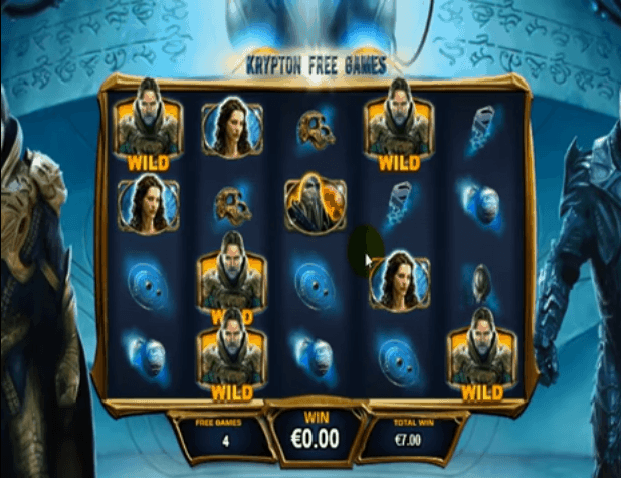 A new reel set with new symbols will appear and now contains 5 reels, 4 rows and 50 paylines.

The player wins 7 free spins which can be re-triggered. In addition to this, before the free spins start up anything to 10 sticky wilds can appear on the reels which remain for the duration of the free spins. 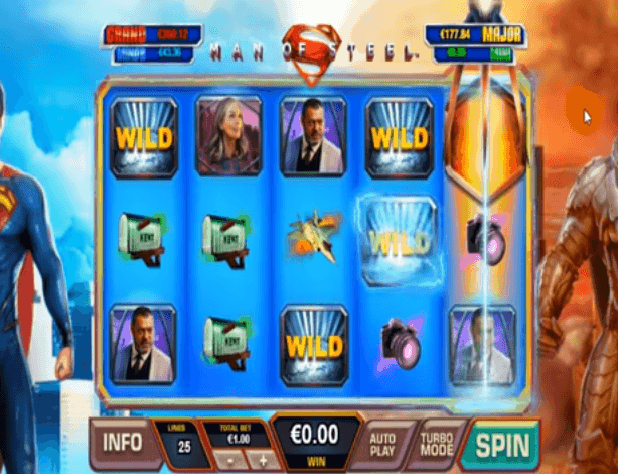 This mini feature is triggered when the World Engine Bonus symbol lands on reel 5. The world engine will activate and turn up to 7 symbols wild.

This is an interesting and fun entry into the new DC Super Heroes Jackpot slot series. The wealth of features and mini features keep the entertainment levels ticking over and while this is a pretty low variance slot that fact in itself makes it a pretty good choice for those who are chasing one of the progressive jackpots. While you are not likely to really break the bank during the main game play, if you really want to attack the jackpots then this could be one of the safer options.

All of Playtech’s global content studios have been engaged to work on, design, develop and deploy games based on these coveted properties from DC Entertainment and Warner Bros. Consumer Products.

Playtech offers the industry’s most extensive portfolio of best-performing omni-channel casino content, delivering more than 600 of the most innovative and exhilarating titles across all channels, platforms and devices.

As part of the Playtech ONE omni-channel offering, the casino product allows players to access content anywhere, at any time and on any device through a single wallet and single account.

Mor Weizer, CEO, Playtech, said: “Playtech’s best performing in-house and premium branded casino slot content will be further strengthened through our partnership with Warner Bros. Consumer Products and the launch of the DC Comics branded games. Our licensees will benefit from the best omni-channel gaming content the market has to offer.

“We look forward to a long and prosperous relationship with Warner Bros. Consumer Products and are all excited to see the outcome of the DC Comics-themed games when they are delivered later this year,” added Weizer.

Please visit the Playtech stand #N6-240 at ICE 2016 for the ultimate gaming experience and see the original costumes from the blockbuster action-adventure film Man of Steel.

Playtech is a market leader in the gambling and financial trading industries. Founded in 1999 and listed on the Main Market of the London Stock Exchange, Playtech has more than 5,000 employees in 14 countries.

It is the pioneer of Omni-Channel gambling which, through Playtech ONE, offers operators and their customers, a seamless, anytime, anywhere experience across any product, any channel (online, mobile, retail) and any device using a single account and single wallet. It provides marketing expertise, sophisticated CRM solutions and other services for operators seeking a full turnkey solution.

Playtech’s financial trading division, run through subsidiary TradeFX, is an established and growing online CFDs and binary options broker and trading platform provider, operating a number of brands including markets.com. Its B2C focused offering is available in more than 100 countries and in more than 25 languages and is licensed and regulated in the EU and South Africa.

Warner Bros. Consumer Products, a Warner Bros. Entertainment Company, is one of the leading licensing and retail merchandising organizations in the world.

DC Entertainment, home to iconic brands DC Comics (Superman, Batman, Green Lantern, Wonder Woman, The Flash), Vertigo (Sandman, Fables) and MAD, is the creative division charged with strategically integrating its content across Warner Bros. Entertainment and Time Warner. DC Entertainment works in concert with many key Warner Bros. divisions to unleash its stories and characters across all media, including but not limited to film, television, consumer products, home entertainment and interactive games. Publishing thousands of comic books, graphic novels and magazines each year, DC Entertainment is one of the largest English-language publishers of comics in the world. 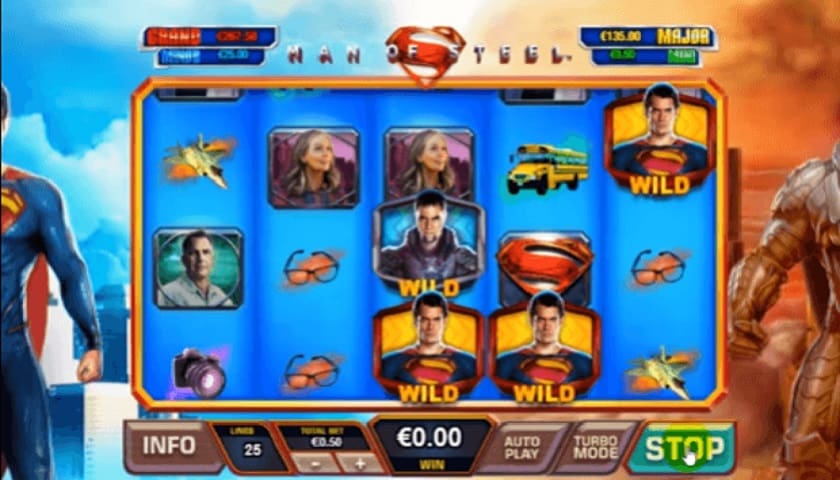 The objective of Man of Steel™ is to obtain winning symbol combinations by spinning the reels.

TO PLAY THE GAME

WILD symbols can stand for any other symbol, except SCATTER symbols, to make the highest possible winning combination.

Increasing the line bet will cause any shifting WILD symbols on the reels to disappear.

If a Krypton Bonus SCATTER symbol lands on reel #5, 7 Krypton Free Games are triggered. Click the CLICK TO START button to begin free games and then click OK on the pop-up message.

Krypton Free Games are played on a special set of reels that contain a different set of symbols and have 50 paylines.

At the end of the round a result board appears that summarizes the winnings. Tap OK to return to the main game reels.

During this feature up to 7 Regular WILD symbols will be added to random positions in the spin result. Any wins on the reels are then calculated as standard.

Note: the World Engine Bonus feature cannot be triggered when there are 1 or more WILD symbols on the reels.

At the end of the round a result board appears that summarizes the winnings. Tap OK to return to the main game reels.

The player picks cells from the grid until the required number of balls in the same colour have been selected to win one of the jackpots. Once all matching balls have been collected, the corresponding jackpot level will be awarded. Clicking Continue ends the jackpot game and returns the player to the main game. The jackpot winnings are added to the main game winnings from the triggering spin (if any) and are displayed in the Win field, together with any other winnings.

The DC Super Heroes Jackpot game has a timeout timer. If a matching set of balls is not collected by the player before the set amount of time elapses, cells will be selected automatically and the corresponding jackpot will be awarded.

The lower and upper edges of the game window hold the casino toolbars. These toolbars contain a number of menus and buttons that allow you to change client settings or take advantage of the various features available in the casino client. To open one of the buttons, click on it.

The bottom toolbar contains the following:

The top toolbar contains the following:

Note on disconnections: If you are disconnected from the Internet in the middle of the game, log in again into the casino. You will be automatically directed back to the game and you can continue the game from the point where it was broken. If you re-open the game without re-logging into the casino, the game will start from the very beginning. In both cases, your previous wins will be paid.

To check the results of your old games or find additional details about recent games, click the History button, available in the Menu. Use your regular username and password to log in and check the outcome of previous rounds of both desktop and mobile version of the game.

The theoretical percentage return to player (RTP) is 95.05%, which includes the Jackpot contribution of 0.99%.