The Football Star Deluxe slot is a collaboration between Microgaming and Stormcraft studios. As you can probably tell from the name, it’s based on European football and features some of your more standard football-themed icons and decoration throughout the game. What makes this one a winner though is all the opportunities for bonus wins that will certainly have you cheering in your seat as you watch the action.

Football Star Deluxe is a five-reel, five-row game. It is one of the handfuls of modern video slot games that gives you a choice of how many pay lines you’d like to play on. You can play on 18, 38, 68, or 88 pay lines. You can find it at most UK online casinos and other European gambling sites.

The game also uses Microgaming’s rolling reels function to give the chance for extra wins. Each time a winning combination lands on the reels, winning symbols will be removed and new symbols will fall in from the top of the screen, giving you the chance to make some extra winning matches before the turn is over.

There are nine regular symbols on the reels plus scatter and wild symbols. The seven lowest paying symbols on the reels will pay back between one and three times your original bet for landing five of a kind while the highest regular symbol will pay you back about six and a half time your bet if you land five of them. The biggest payoff will be when you manage to land five scatter symbols, you’ll get back 250 times your bet and a bunch of free spins to boot.

Setting your bet can be a little bit complicated because of all of the different options available. There are, however, some preset options to allow you to pick some fast bets. You can set the coin size that they’d like to play, how many coins you’d like to play on each line, and how many lines you’d like to bet on. You can also select the coin value from £.01 up to £.05. And you can play anywhere from one to ten coins on each line, and you can select 18, 38, 68, or 88 lines to bet on. When we put that all together, that gives us a minimum bet of £.18 and a maximum of £44 per spin.

Where to Play the Football Star Deluxe Slot

Yes – Why To Play The Football Star Deluxe Slot 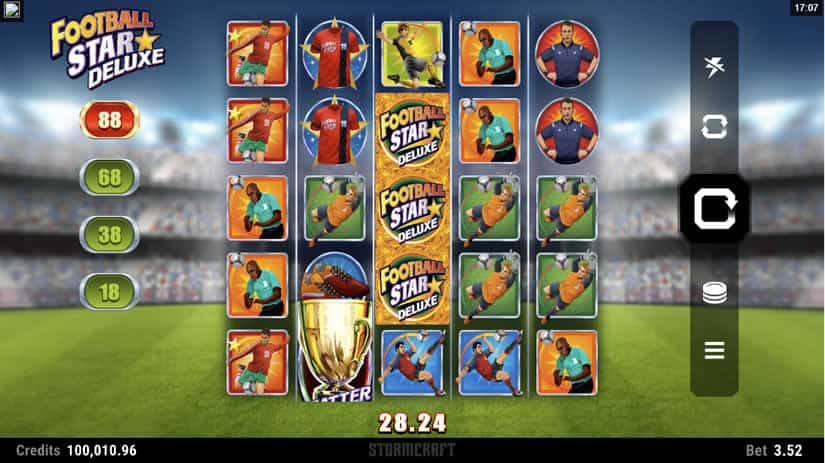 There are several different bonus features and they can pile up to bring in some very handsome wins when the right combinations come together in your favour. Here’s a quick breakdown of how everything works.

The rolling reels feature is active in both the base game and during free spins. Whenever a winning combination stops on any payline(s), those symbols will be removed from the reels and new symbols will fall in from the top.

Striking wilds are a random feature that can activate at any time. When it triggers, a football player will appear and kick a ball at either reel two, three, or four and turn the entire reel wild. When they do so, you’re also guaranteed a win when it happens. Making the deal just a little bit sweeter, any reel that turns wild will stay wild for any rolling reel features that activate, too.

Free spins will trigger when you land three or more scatter symbols on the reels at a time. You’ll get 12 free spins that also come along with growing wilds and a multiplier trail.

The multiplier trail simply adds a win multiplier to your wins with each free rollthat you get. You’ll get up to an 8x multiplier on your first 5 rolls.

Wild symbols are super stacked the last four reels whenever the free spins features is active. Making it even easier for you to hit some of those wilds, one wild symbol is added to each stack with each consecutive free spin.