The Jumanji slot from NetEnt is a brand new 36 (fixed) pay line slot. Just like the 1995 movie about a fictional board game come to life that it’s based on, this video slot is an adventure filled with twists and turns and loads of wild animals. There are five reels laid out in a 3-4-5-4-3 viewable row pattern and plenty of bonus features to keep you wondering what’s going to happen next.

The reels sit in the middle of the Jumanji board game, which you’ll get to play if you manage to land at least three scatter symbols on a spin. The low paying symbols are the fairly standard J, Q, K, A and the higher paying symbols are four animals: the pelican, alligator, rhinoceros, and lion. You’ll also encounter wild symbols, and the Jumanji game box serves as the scatter symbol.

Offering a pretty wide range of betting options, the coin value on the Jumanji slot can be set as low as €.01 and as high as €2.00. The minimum wager is ten coins per spin but can be pushed up to 100 by adjusting the bet level. This gives us a minimum wager of just €.10 and a maximum of €200.00.

Yes – Why To Play The Jumanji Slot 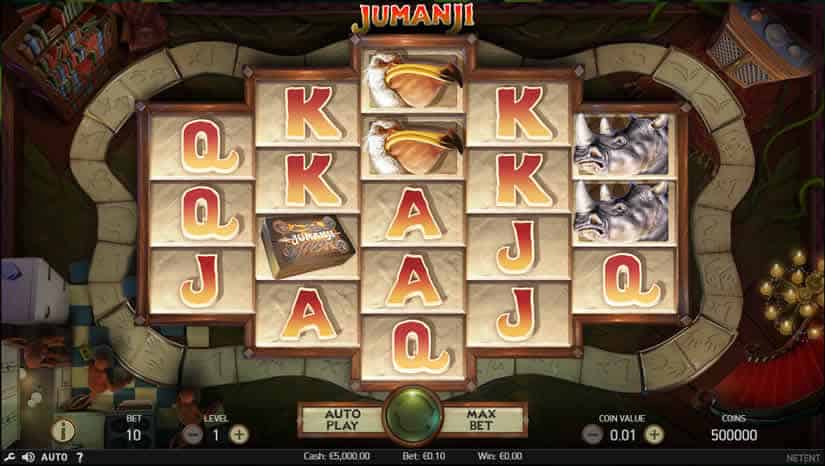 NetEnt did a great job of packing bonus features into Jumanji. There are several features that can activate randomly during regular spins, many bonuses available in the board game feature, and several more chances for bonus loot during free spins.

The Monsoon Wilds feature can also trigger randomly during regular spins. When this feature triggers, wild alligators will jump out of the screen, landing back on the reels, making one or two of them completely wild. It is not possible that only the fifth reel will be wild.

The Monkey Mayhem feature happens randomly when the reels stop. When this feature is triggered, any winning combination that has landed on the reels is first paid, then monkeys will shuffle symbols around the reels to create a guaranteed win which will be paid out according to the pay table.

When the Wild Stamped feature randomly triggers, rhinos will stampede across the reels as they spin, leaving behind anywhere from four to nine wild symbols.

Landing three or more scatter symbols on the reels will launch the board game feature, where players can really rack up some bonus payouts. First, the player will choose a token to move around the game board. The token is purely a cosmetic feature and does not influence the outcome of the game.

The player’s token is placed on the game board and the player will roll dice to move around the board. The odds of the dice rolls are true to rolling real dice. With each move, the player has a chance of landing on a coin win (bet x multiplier), free spins with one of the four bonus features above activated, the mystery feature, or extra rolls of the dice.

The number of times the player will get to roll the dice is determined by the number of scatter symbols that trigger the board game feature, as follows:

The player will be awarded seven free spins with the Monsoon Wilds feature activated. The only exception here is that the same wild covered reels cannot be chosen for two consecutive spins.

Landing on the Monkey Free Spins feature will award the player six free spins with the Monkey Mayhem feature activated on all spins.

Stampede Free Spins will award five free spins, which will all play out with the Wild Stampede feature activated.

When a player lands on the Mystery Feature space on the board, a carousel of awards will cycle through the centre green Jumanji circle. The player will be awarded with the one the carousel stops on. Potential rewards include free spins, 2x-10x coin wins, and two extra dice rolls.

Since each free spin feature can be triggered only once during the board game feature, those that were previously triggered will not show up as rewards during the mystery feature.

When the player lands on any space on the board with a multiplier symbol, he is awarded a coin win consisting of the bet that was in play when the board game was triggered, multiplied by the multiplier.

As you might have guessed, when the player’s token lands on a space that awards an extra roll, the player will be given one extra roll of the dice. 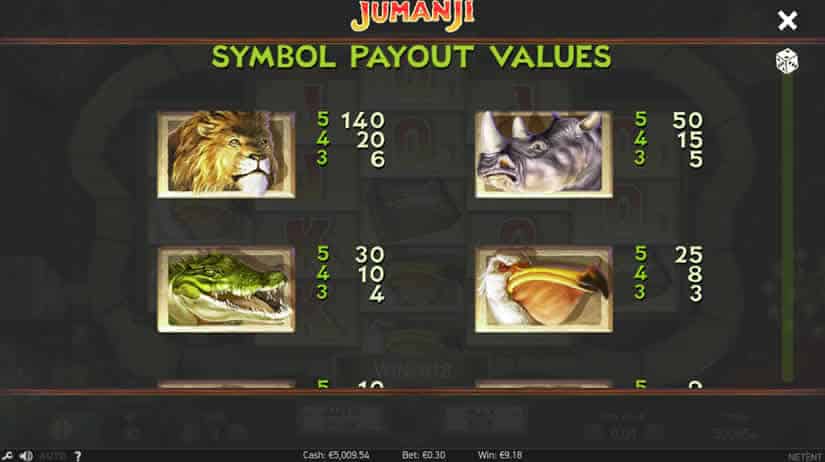 It looks like NetEnt has done a great job at both creating a fun and interesting slot and paying tribute to the unique, original Jumanji film. Few slots have so many different bonus features, and even fewer implement them in such a creative way.

The Jumanji slot is accessible to all kinds of players with a small minimum wager and the possibility to bet big. The 96.33% return to player rate also means that no matter how much you’re wagering, you’ll be able to get good play for your money.

The Jumanji slot gets a solid yes recommendation from us. This one is sure to become a favourite among slot enthusiasts.