The Mega Moolah Absolootly Mad slot is a new online slot machine, part of Microgaming’s massive Mega Moolah progressive jackpot. This collaboration with Triple Edge Studios is themed around the story of Alice In Wonderland with a focus on (as you may have guessed from the title) the Mad Hatter.

The theme is colourful and well rendered and the game plays smoothly. If you’ve been looking for a slot with an original theme and the potential for multi-million dollar payouts, this one should meet your requirements quite nicely.

Mega Moolah Absolootly Mad is a five-reel, three-row slot that awards prizes based on the 243 ways to win payout system. There are ten regular symbols on the reels plus a wild and free spins symbol.

This is a fairly low volatility game, so none of the symbols pay out big, but some are more valuable than others. The mad hatter himself pays out the most and then other high-value symbols include characters and items from the story. Lower-value symbols are stylized versions of the four playing card suits. High-value symbols outnumber the low-value symbols six to four, which is good to see.

Placing bets on Absolootly Mad is just a matter of selecting the amount that suits you from the preset wagers built into the game. You have 38 choices ranging from just £.20 per spin up to £50.00.

Play Mega Moolah at These Casinos

As was mentioned above, this slot has more bonus features than you tend to see on many progressive jackpot games where the jackpot is about the only bonus feature offered. Here’s a quick rundown of what you’ll see.

Some players may be familiar with this feature being referred to as cascading symbols. Whenever there is a win, any symbols in the winning combination(s) will be removed from the reels and new symbols will fall in from the top, giving you the opportunity to add more to your winnings. 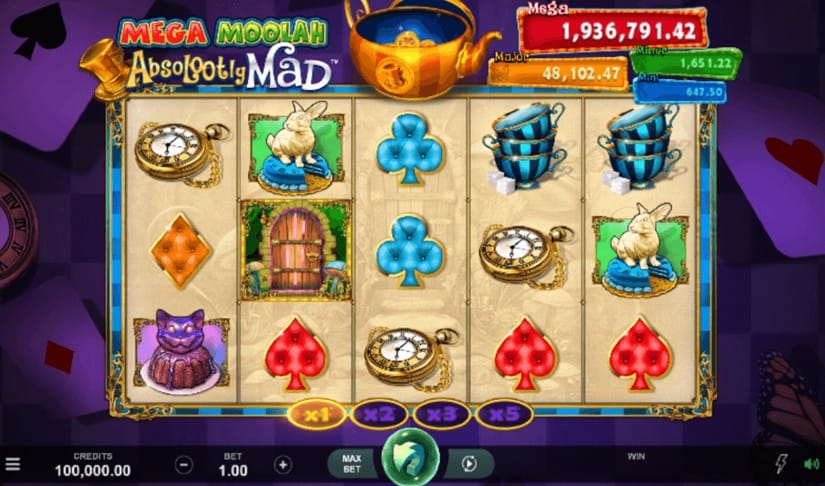 When the progressive wheel triggers, you’ll get to spin and you are guaranteed to win one of the four jackpots, determined—obviously—by where the wheel stops.

Three free spin symbols will give you 8 free spins. Each triggering way will award 8 free spins plus wild symbols can be a part of the trigger. Free spins can also be re triggered!