The Village People Macho Moves slot is the product of collaboration between Microgaming and Fortune Factory. Straight out of the ’70s, The Village People come alive in this slot through sight and sound. Get ready for smoking hot disco dance moves and those catchy Village People tunes that you just can’t get out of your head. It’s time to boogie ‘til the break of dawn! All Microgaming slots are available to UK casino players.

The Village People Macho Moves is a six-reel, three-row slot with 15 fixed pay lines. There are ten different symbols on the reels with payouts ranging from 250 times your bet for landing six wild symbols on a pay line down to two times your bet for six clubs on a line. There’s plenty of disco imagery on the reels with golden microphones, platform shoes, vinyl records, and even 8-track tapes.

Every aspect of the Village People is represented on this slot. Of course, all six of the guys in the group are there, dancing above the reels as you play. They each have some special moves of their own that come into play, too. You could probably guess that this slot features some of the music from the group, but the designers decided to take it a step further. There’s actually a jukebox that will allow you to pick your favourite from some of the Village People’s biggest solid gold disco hits.

Setting your bets on the Macho Moves slot is quick and easy with no tricky options to figure out. The total bet is calculated as playing 20 coins. You can set both the coin value and the number of coins you’d like to play on each line. The coin value ranges from $.01 up to $.25 and you can bet from one to five coins on each line. That makes for a minimum bet of £.20 and a maximum of £25.

Yes – Why To Play The Village People Macho Moves Slot 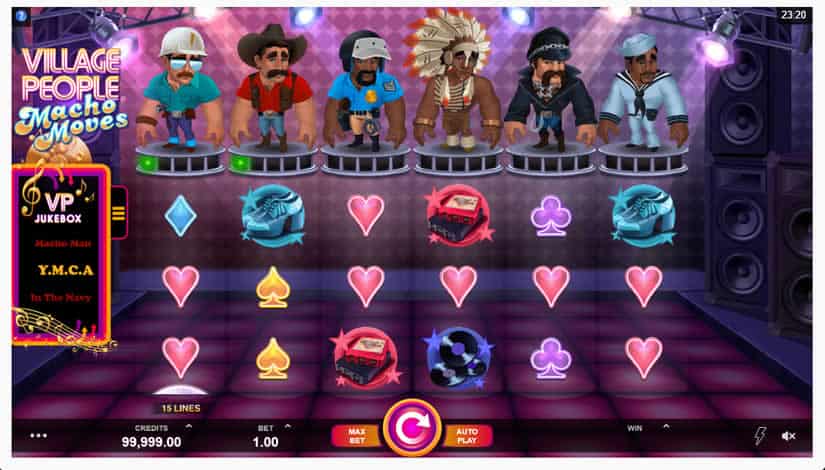 There are quite a few bonus features in this slot to keep you guessing and on your toes. There is one feature for each of the guys in the group and when you trigger one of them they’ll let loose with their own macho moves. Macho moves are triggered by collecting five VIP wild symbols for one of the characters which will award five free spins with the following bonuses.

Free spins with random multipliers. Before each free spin, a random win multiplier is selected. Multipliers range from 2 to 20 times a regular win.

Free spins with Random Wilds. Anywhere from two to 12 wild symbols are placed across the reels on each spin.

Free spins with random wild reels. Two to four of the six reels become completely wild before each spin.

Free spins with walking wild reels. At the start of the free spins, reels five and six will be wild. With each spin, the two wild reels will move one reel to the left.

Free spins with symbol upgrades. All low-paying symbols will be removed from the reels and replaced with random higher value symbols.

Free spins with locking wilds. Before each spin, one to three wilds will be placed on the reels and they remain locked in place for the remainder of the free spins feature.