The Gods Of Gold slot is a new and exciting game from the veteran design team at NetEnt. Not only have they managed to put in some of the best graphics we’ve seen in one of their games for quite a while, but they’ve also added some new game mechanics that will absolutely blow you away. What looks like a quick and simple game at first, quickly becomes a complex video slot that has the potential to rack up some wins that are out of this world. You can play this slot at any UK online casino.

Gods Of Gold starts out at as a small and simple three-row and three-row slot. You’ll spin in a few times and it’ll look like it’s going to stay that way, but it won’t be long before the magic starts to happen.

The reels on this slot will actually expand and give you an infinite number of ways to win. There are no traditional pay lines. All you have to do is match like symbols on adjacent reels from left to right in groups of three or more and you’re a winner. With each win, one more reel will be added to the right side and spin. As new wins are created, more reels are added, and more spins occur and the process will go on infinitely as long as you keep creating new matches. When no new matches are made, everything stops and the totals are tallied and added to your balance. Some new reels will even grant you respins if you don’t get a match on the first shot.

Setting your wager on the game is easy. All games played with 20 coins and all you need to do is pick the value of the coins you want to play with. You can choose from a coin value of just £.01 or go all the way up to £20. So, you can play for anywhere form £.20 per spin to £200 per spin.

Where to Play the Gods of Gold Slot

Yes Why To Play The Gods Of Gold Slot

No – Why Not To Play 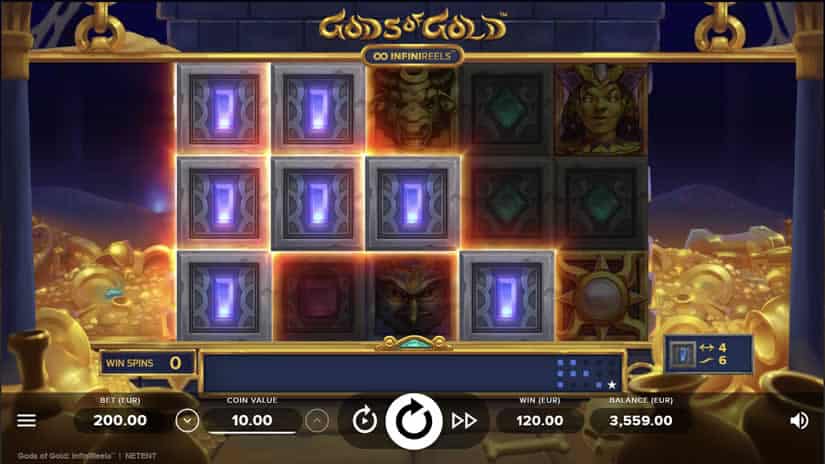 The two main features of this game are the infinite reels and the WinWpin feature, but there are some extras mixed in there to keep things interesting.

Whenever three or more of the Win Spin feature symbols land on the reels, you’ll be given 10 free spins. Not only are the spins free, each one is guaranteed to be a winner as well. If any more win spin symbols land while the feature is active, you’ll also be given give more spins.

Once a win has been achieved, wild symbols can also land anywhere from reel four onward, making it even easier to make new matches.

It’s simple. If you keep winning, the game keeps adding more reels. There’s no limit to how many reels can end up there and you can win a ton of cash.

Respins can be awarded randomly whenever a new reel stops and doesn’t create a new win.

The Multi-slam function is also random. It can be triggered any time there are new reels added. When it goes off, you’ll get either two or three new reels instead of just the one you’d normally get when you win.