The Ozzy Osbourne slot from NetEnt brings heavy metal’s Crown Prince of Darkness to life on video slot reels for the first time ever. Teasers and trailers for this slot have been floating around for a while now but the wait for the final product was definitely worth it. The theme most certainly captures the spirit of the legendary Black Sabbath front-man and solo artist at his best. From well-executed imagery to Ozzy classics like Crazy Train, Diary of a Madman, and Mr Crowley, this slot has everything a true fan could ask for.

Ozzy Osbourne slot is a five-reel, three-row slotmachine where all of your bets will play across 20 fixed pay lines. There are eight regular symbols on the reels plus wild and scatter symbols. Of the eight basic symbols, four are high-paying and four are low-paying. The high-paying symbols are various versions of the Oz-man as he’s looked over the years while the low-paying symbols are stylised versions of the four playing card suits that include crosses, crowned skulls, and more.

As you would expect from a quality NetEnt release, there are also plenty of bonus features available that will boost payouts as you play. There’s also a “bonus bet” feature that allows you to put down some extra money each spin for a higher chance at hitting bonuses and features.

You have two basic options you can set when placing your wagers on this slot. You’ll be able to choose the value of each coin as well as how many coins to play on each of the 20 pay lines. The coin value can be set from £.01 up to £.50 and the coin level (coins per line) can be set from one to five. That gives us a minimum wager of £.20 per spin and a maximum of £50.

If you enable the bonus bet feature, the game works as if you were betting on 40 lines instead of 20. So, minimum and maximum wagers would double to £.40 and £ 100 respectively.

Play the Ozzy Osbourne Slot at these NetEnt Casinos

Yes – Why To Play The Ozzy Osbourne Slot 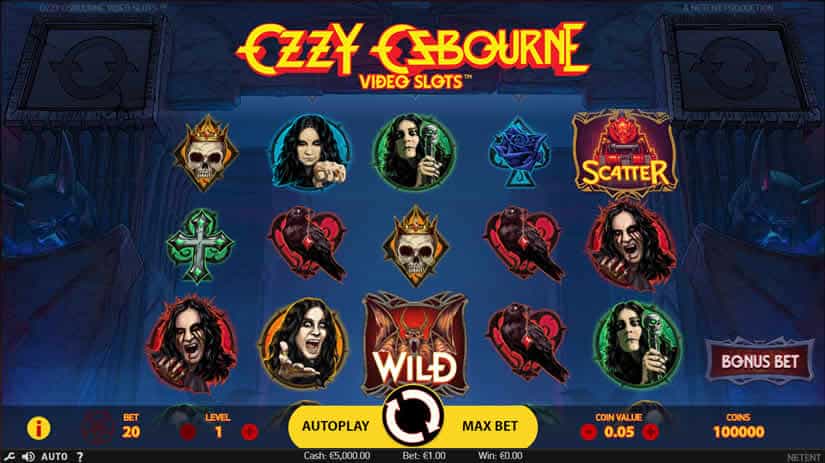 As was mentioned above, there are plenty of bonus features built into this slot that will most certainly boost wins into some very high and happy numbers. The features may not look all that impressive at first, but once you’ve seen them in action a few times you’ll start to understand how good they really are.

The symbol charge-up feature is always combined with either re-spins or free spins. Before either of those features starts, the charge-up will be triggered.

Free spins are activated when three or more scatter symbols land anywhere on the reels. You’ll be granted four free spins. The symbol charge-up feature will activate before each individual free spin and any effects granted are cumulative. This may not sound like much, but with the right combination of charge-up effects, you can score some colossal wins.

The bonus bet feature allows you to double your bet in exchange for better odds on all of the game’s features. With the bonus bet turned on, you’ll be playing 40 coins per bet level instead of 20.

You’ll get five free spins instead of four when three scatter symbols land and the possible multipliers in the symbol charge-up feature will go up to 5x and 7x. In addition, the normal frequency of hitting the free spins feature is 1 in 259 but with the bonus bet turned on the frequency goes up to 1 in 140. The win percentage will also go up slightly from 24.2% to 25.5%.