The Rainbrew slot comes to us through a collaboration between Microgaming and Just For The Win. The two companies have come together to deliver a very unique slot machine that starts out as a five-reel, three-row, 243 ways to win game. During the game, however, the reels can take on a 3-5-5-5-3 row configuration with 1125 ways to win. Making things even more interesting — and perhaps confusing — there are two horizontal reels on the Rainbrew slot (reels spin from left to right instead of top to bottom). As usual, you can find Microgaming and Just for the Win games at most UK online casinos.

The theme of Rainbrew revolves around a leprechaun brewery. Among the 12 different symbols on the reels, the male and female leprechaun pay the highest. You’ll also see barrels and mugs of beer, as well as three different kinds of wild symbols, free spin symbols, and more.

Wagering on the Rainbrew slot is very straightforward. Since it’s a 243 ways to win slot, players don’t need to set how many lines they’d like to play. The game doesn’t use a coin value or coin multiplier either. You can simply choose how much you want to bet on each spin from the set values, which range from a low of £.10 to a high of £100.

Yes – Why To Play Rainbrew Slot

This game doesn’t have a lot of bonus features, but the ones it has work in an interesting and unusual way, and they can have a significant effect on the amount of your payouts.

Wild Symbols And The Sidewinder Feature

There are three different wild symbols on Rainbrew, which can be a little bit confusing at first. All three of the wild symbols will match any symbol on the reels except for free spins.

During free spins, both horizontal reels are active and the ways to win increases to 1125. The following changes also apply: 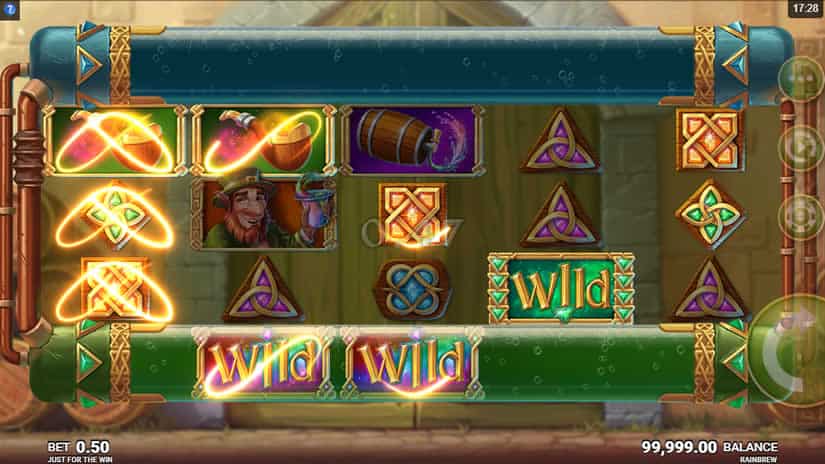 Rainbrew is certainly a unique slot as far as its looks go. The overall gameplay, however, doesn’t seem to keep up with the good design. In the end, what you really have is a 243 ways to win slot with wild symbols and free spins. There isn’t anything too exciting about that.

What it’s really going to come down to is whether or not the player likes the game design and the chances of winning. It’s an interesting visual design, but it just doesn’t change gameplay enough to make Rainbrew really special.

Especially with two companies working on the game, one would expect something more. A more interactive bonus feature and perhaps another use for the horizontal reels would have made this one a sure winner.

If you like the 243 ways to win feature, you can check the following slot reviews: