The Wild Blood II slot from Play’n Go is the devilishly good sequel to the game developer’s successful vampire-themed slot, Wild Blood, which was released back in 2013. (You probably figured that out on your own though.) As you spin the reels, you’ll encounter several beautiful female vampires who are most certainly trying to tempt you to get close enough to allow them to feed. As you explore their world of blood and bats, you’re sure to find some fortune as you uncover the mysteries.

Wild Blood II is a six-reel, four-row slot that pays out based on 4096 ways to win. Rather than paying on traditional pay lines, wins are paid out when symbols match on at least three adjacent reels starting from the left-most reel. This effectively creates 4096 possible pay lines or “ways to win”.

There are ten regular symbols on the reels with four paying higher values and six paying less. There is also a male vampire who serves as the wild symbol and a vile filled with blood as the game’s scatter symbol. A wild symbol stopping in the right place can trigger a free respin and the scatter symbol will trigger free spins, as you no doubt suspected.

Placing wagers on Wild Blood II is quite simple and straightforward, as we’ve come to expect from Play’n Go slots. There are 13 preset bet amounts and all you’ll need to do is select the one that’s right for you. You can play for as little as £.20 per spin or go all the way up to a maximum of £100.

Yes – Why To Play The Wild Blood II Slot 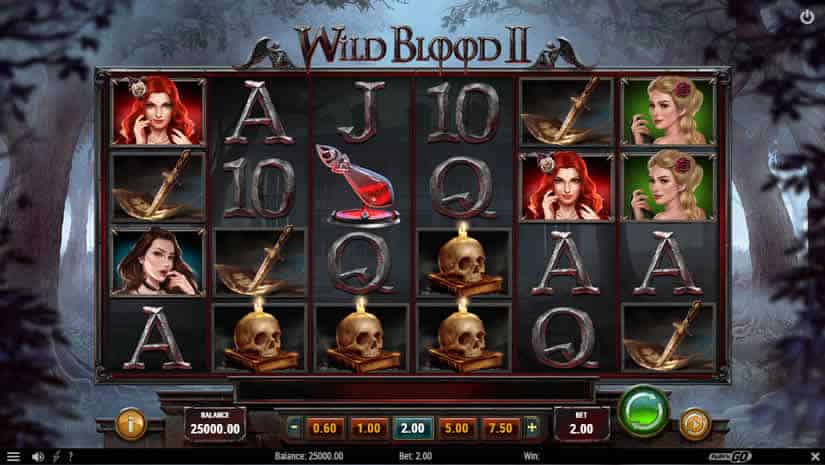 The main bonus feature on this slot is the free spins. It’s not just any free spins feature, however. When you trigger free spins, you’re in for a wild time with our blood-sucking friends.

The minor bonus feature to be found on this slot is the vampire bat respins. They are triggered when the wild (male vampire) symbol lands on the last reel during any regular spin. When this happens, our friend will transform into a vampire bat and fly over to the first reel. When he reaches the first reel, he’ll become his full-form self again and fill the entire reel. The other five reels will then spin once and you’ll have your shot at an additional win.

You’ll have three options to choose from before free spins begin. Take your pick from the three beautiful female vampires to experience one of three different free spin modes. Laura will make every wild symbol that lands on the reels spread up or down. When you play with Margaret by your side, for every four wild symbols you collect the win multiplier will increase by one and you’ll be granted two additional free spins. Rebecca will multiply every wild by either two or three times and they can combine up to a total of 81 times. It’s also possible to gain more free spine with Laura or Rebecca when you land two or more scatter symbols.