The Age of Asgard slot from Yggdrasil takes players into the mythological world of the Norse gods to do battle for riches and glory. With powerful female goddesses and evil undead warriors facing off on the reels, you’ll be left in the middle to help decide the fate of the gods and your own fortune. This uniquely themed and constructed video slot is sure to satisfy the hunger for battle of even the most blood-thirsty warrior soul.

Age Of Asgard is a five-reel, three-row slot times two. That is, there are two independent sets of five reels with three rows and 20 fixed pay lines each to give you some wild chances at winning big prizes. One set of reels represents the goddesses fighting for good, and the other represents the gods of evil. Making the action even more exciting, it’s possible to combine everything together and play on a massive five by six playfield with 50 pay lines. Where to find it? You can play the Age of Asgard slot at most UK online casino sites.

Placing your bets on the Age of Asgard slot is an easy affair. All bets automatically play on all 40 lines and you have the option of setting the value of the coins to play on each line. The minimum coin value is £.005 and the maximum is £5.00. If we do the math there, that gives us a minimum overall wager of £.20 per spin with a maximum of $200.

Play the Age of Asgard Slot at These Yggdrasil Casinos

Yes – Why To Play The Age Of Asgard Slot 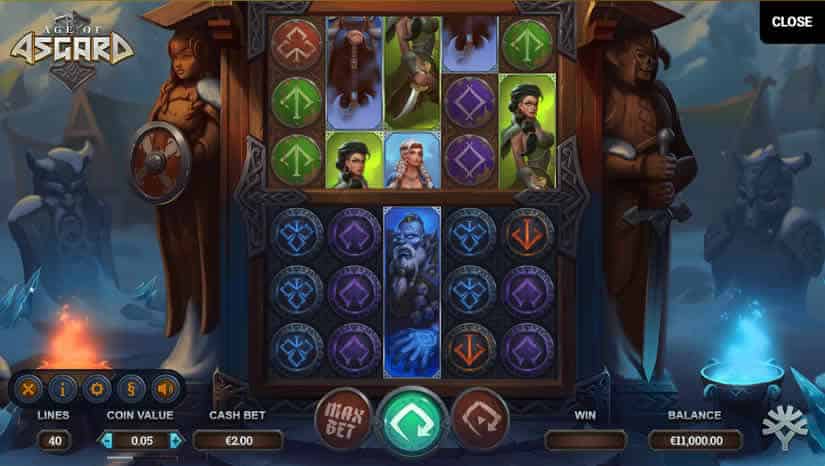 Things might seem a little bit confusing at first with so much going on between the two sets of reels, but you’ll soon see that there are some great bonus features incorporated into this game. Let’s take a look at how they all work.

There are two different wild symbols in the base game. Both are stacked three symbols high. One appears on the top set of reels and the other appears on the bottom. When either of the symbols lands anywhere it’s possible that they will be nudged up or down to cover the entire reel if they aren’t already doing so.

When this happens, each of the original wild symbols will spawn up to four more single-space wild symbols. What’s more, if any of these new wild symbols happens to spawn over a high-paying symbol, the entire stacked symbol will become wild.

Free spins are triggered when you land three free spins symbols on either the top or bottom set of reels. All three symbols must be on the same set of reels. Landing two symbols on the top and one on the bottom, for instance, will not trigger the feature.

The randomizer wheel is triggered when you land five free spins symbols (three on one set of reels and two on the other). It can either upgrade your free spins to the special Ragnarok free spins feature or award 1000 coins. There are four spaces on the wheel that will upgrade your spins and four that will award coins.

If you land six free spin symbols (three on each set of reels) you’ll trigger the rare and highly rewarding Ragnarok free spins feature. This feature will combine the top and bottom set of reels and remove all low-paying symbols. You’ll be awarded 20 free spins which will play out with only wild symbols and the six stacked high-paying symbols.

Like the regular free spins feature, there are six-high super wild symbols but during Ragnarok free spins they will always nudge to fill the entire reel, trigger the clash feature, and award a free respin.