If you are fed up with staying in the hot jungle, but you still want a chance to win a massive progressive jackpot, then we have a perfect game for you. Neon Valley Studios, in collaboration with Microgaming, developed Atlantean Treasures: Mega Moolah, a five-reel video slot that pays both ways, offers respins and expanding Wilds that trigger respins.

The 2020 release will join other Mega Moolah video slots that paid millions in progressive jackpots so far. As the name suggests, gamers will be taken to the very bottom of the sea, where they will explore the ancient civilization of Atlantis, collecting huge wins along the way.

The Microgaming product is done for the Quickfire platform and features five reels, three rows while offering 10 fixed paylines, which pay both ways. To land payouts, players will have to land at least three matching icons on a payline, starting from the leftmost or the rightmost reel. A Beautiful Mermaid is the game’s Wild that substitutes for all other icons. Plenty of underwater critters will appear on the reels but will be protected by bubbles. Expect to see lots of fish, seahorses, seaweed, and stars. The symbols that pay the most in the 2020 release are the blue lucky seven and the bar icon.

When talking about the visuals, there is nothing special to say. The graphics are crisp, but not state of the art. Even so, the reels run as smoothly as possible. The stress is on the four jackpots in the Microgaming title. The soundtrack is really awesome, very tranquil and will keep you calm as you spin the reels.

The gameplay is quite simple, and everything is very neatly explained, so, even if mere beginners, punters will be spinning the reels like pros in no time at all. Betting is fixed at 10 coins per single spin, while the coin denomination can be altered, going from £0.01 up to £20. This will give you a very wide betting range and satisfy the needs of both penny punters and high rollers since the lowest you can bet is £0.10 and the biggest bet is set at £200 per spin. Apart from the four jackpots, you can win up to 500 times the bet during the base game.

Yes – Why To Play The Atlantean Treasures: Mega Moolah Slot 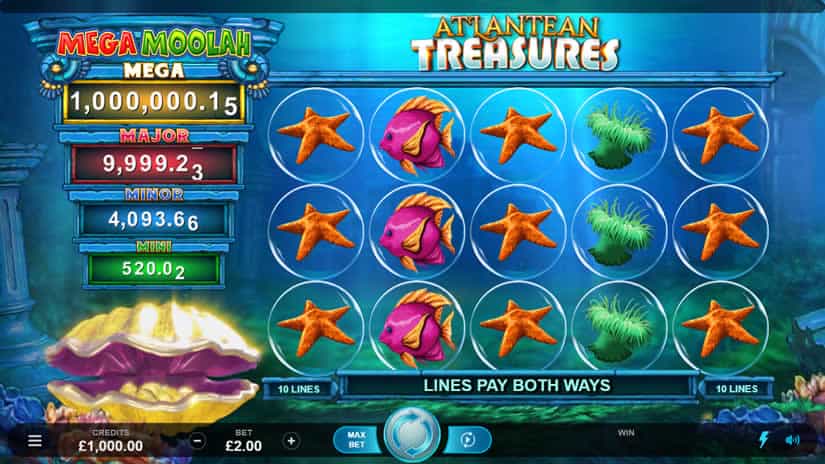 Apart from spinning the reels, waiting for a fin to occur, players can enjoy expanding Wilds that trigger respins and can expect to get one of four progressive jackpots on the offer.

The Mermaid is the Wild in the 2020 release and will substitute for all regular symbols. Also, it acts as an expanding Wild. It appears only on reels 2, 3, and 4 and once on the screen, it will expand to cover the entire reel. Mermaid will then trigger a respin while being locked on her position. If another Wild lands, another respin is awarded. Up to 3 respins can occur at the same time.