The Golden Grimoire slot from NetEnt presents a well-designed and darkly themed mystical experience full of magical charms, transforming mystery symbols and perhaps even gateways into other worlds where unknown treasures await. A wondrous journey lies ahead for those brave enough to gaze into the spirit world and seek their fortune.

Although there are 40 pay lines on this slot, the game only takes 20 coins per spin, so it’s almost as if you’re getting 20 line bets for free. When setting up your wager you’ll be able to select the value of the coins you want to play as well as the number of coins to play on each of the 20 effective lines. The coin value can bet set from £.01 up to £2 and the number of coins played can range from one to ten. That adds up to a minimum overall wager of £.20 per spin and a maximum of £400.

Yes – Why To Play The Golden Grimoire Slot

There are two basic bonus features built into Golden Grimoire that can combine in a few different ways to boost your payouts. If you have the patience to play through and wait for them to hit, you could see some very large wins flashing by on the screen.

The feature you will undoubtedly see the most is the mystery symbol. The Golden Grimoire itself is the mystery symbol and will appear randomly on reels three, four, and five in the base game. When this symbol stops on the reels, one of the regular symbols will be chosen and all will transform to become that symbol. In addition, if the transformed mystery symbol matches the leftmost symbol in the row, all symbols in between the two will also transform to match, creating an instant win.

Scatter symbols can land on reels one, three, and five and will trigger eight free spins when three of them land anywhere on the screen. Mystery symbols can also land during free spins and work the same way as in the base game except that they are sticky during the free spins feature. This means that any mystery symbols that appear will lock in place and hold their position for the duration of the feature. They will transform into a new, random symbol with each successive spin. 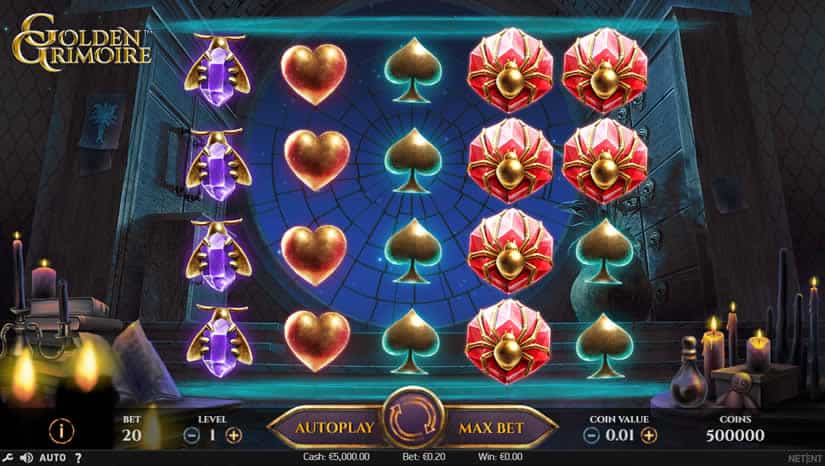 As mentioned previously, you can find NetEnt slots, including Golden Grimoire slot at most European online casinos. I would recommend to check the cashable casino bonus page to maximize your gambling experience.

If you liked this online slot, you may want to try these alternative super high RTP slots, also available in your region: