The Rise Of Dead slot from Play’n Go is a decidedly dark Egyptian themed slot. Rather than following the standard trend of softly blowing sands around magnificent pyramids and mysterious jewels, this one concentrates more on the mummified inhabitants of the pyramids and the possibly evil spirits that may lurk inside with them. If you’re looking for a theme that’s familiar, but not quite like anything you’ve seen before, Rise Of Dead could be just the game for you.

Rise of Dead is a classic five-reel, three-row slot. That’s about the only part of it that fits the description “classic”, however. You’ll get paid for combinations on 20 fixed pay lines with the possibility of winning—as with many Play’n Go slots—up to 5,000 times your initial bet on a single spin.

All together, there are ten different symbols to be matched on the reels. There are scatter and wild symbols along with three high-paying symbols and five lower paying. The highest paying combinations are made from the wild symbol and three thoroughly evil-looking Egyptian mummies. The lowest value combinations are made up of symbols represented by the playing card values ten through ace. There are, of course, some great bonus features that will boost your winnings as well.

Wagering on Rise of Dead is very straightforward. As with most Play’n Go slots, you’ll just need to select the amount you want to bet on each spin and you’ll be ready to go. There are 15 different preset wager amounts to choose from. You’ll be able to spin for as little as £.20 or you can take it all the way up to £200.

Where to Play Rise of Dead Slot – Play’N Go Casinos

Yes – Why To Play The Rise Of Dead Slot 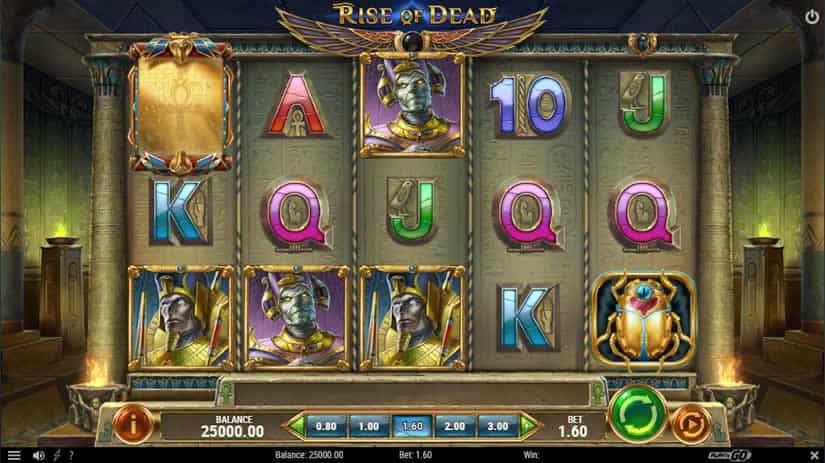 The bonus features on this slot are fairly simple, but they can add up to some well-sized additions to your bankroll if you hit a couple of lucky spins. Did we mention that you can win up to 5000 times your bet on just one spin?

The Megastacks feature on the Rise of Dead slot is simple but can help line up some big combinations for you. One regular symbol is randomly selected on each spin to be stacked 12 high on each reel for that spin.

The free spins feature starts as you would expect. All you have to do is land three scatter symbols anywhere on the reels and you’ll be awarded ten free spins. Once the free spins start, landing one, two, or three additional scatters on any spin will award two, four, or ten more free spins respectively.

All of the symbols also gain some special characteristics. Wild symbols will be stacked six or seven high on every reel. The high-paying pharaoh symbols will expand to cover the entire reel where they land if it will create extra winning combinations for that spin. Low-paying symbols will also appear in stacks of 8 on all reels.

The Gift Of Gods feature can occur randomly during any regular game spin. When it is triggered, reels one, three, and five will all be covered with the same symbol while reels two and four continue to spin to determine if you hit a big win.