Looking for more information about the Age of the Gods: Norse – Ways of Thunder slot? Check this complete review to find out if this is the right slot machine for you.

After giving much attention to the deities of ancient Greece, Playtech turn their focus on the Nordic mythology and dedicate their latest Age of the Gods series to Norse gods. Their newest release, called Age of the Gods: Norse – Ways of Thunder, is a five-reel video slot that offers up to 3,125 ways to win. The main theme of the 2020 release is the mighty god Thor and his magnificent hammer, called Mjolnir.

Playable from £0.25 per spin, the Playtech title offers several additional features and traditional Age of the Gods jackpots. Apart from that, there are up to 50 free spins on the offer, with expanding reels.

I can confirm that almost the entire Age of the Gods series is quite awesome!

The Age of the Gods: Norse – Ways of Thunder slot release features five reels and offers 720 ways to win in the very beginning. But the number of ways to win increases during the game up to 3,125. Not all of the cells on the reels are free during the base game because they are covered in ice, but every reel offers up to 4 rows in total.

This slot machine pays both from left to right and vice versa, beginning from the leftmost or the rightmost reel. As for the symbols populating the reels, Thor himself is there, as well as his Mjolnir, twin ravens Huginn and Muninn, the wolf Fenrir, double rams, while low-paying icons are represented by runes. We also have a Wild that substitutes for all icons and a Scatter that triggers the Thor’s Free Spins feature.

Age of the Gods: Norse – Ways of Thunder slot boasts excellent graphics and a fitting soundtrack, and we expected nothing less from Playtech, given the fact that they did a tremendous job with other video slots from the series. We will see ice that covers cells, Nordic lights in the background, a freezing winter, and even the sacred tree Yggdrasil.

Wagering & Payout in the Age of the Gods: Norse – Ways of Thunder slot

The betting range is extremely wide and will please both high rollers and penny punters. Twenty-five coins are required for each spin, but, due to the fact that the coin value can be altered, players can wager as low as £0.25 and as high as £500 per single spin. As for the payouts, there are three jackpots on the offer – Daily, Extra and Ultimate, and they can really surprise punters with amazing wins. If you do not have luck with jackpots, you can rely on the maximum payout above 10,000 times the triggering bet.

Yes – Why To Play The Age of the Gods: Norse – Ways of Thunder Slot 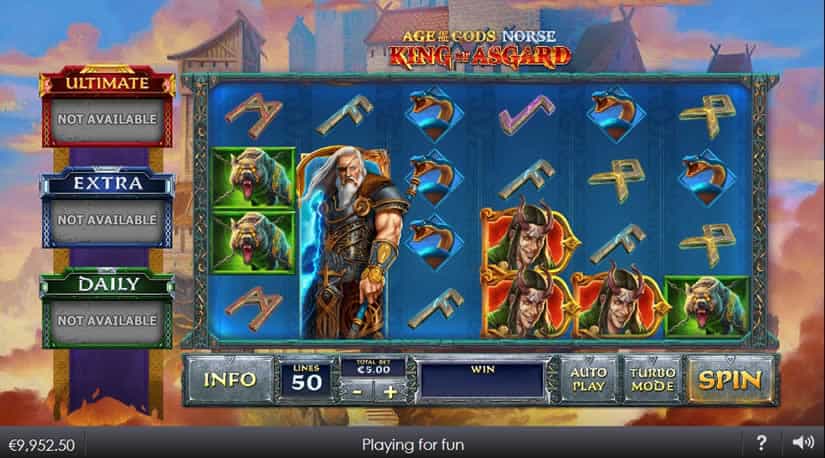 We have already mentioned that there is plenty to play for in the Age of the Gods: Norse – Ways of Thunder slot. We have the AllWays pay system, which allows gamers to land wins from left to right and vice versa. The Wild will substitute for all regular symbols, while the Bonus Scatter will trigger the Thor’s Free Spins feature, where players can get up to 50 free spins with expanding reels.

Land three Scatters on the reels and you will trigger the Thor’s Free Spins feature. Up to 50 free spins can be triggered during the feature, but the best part of the story is that reels start expanding in freebies. As you go along the way, the frozen cells will be melted, which will increase the reel grid up to the maximum possible 3,125 ways to win, and this is where you can win hefty payouts.

Age of the Gods Progressive Jackpots

Like in other video slots from the Age of the Gods series, the latest edition also offers the three progressive jackpots – Daily, Extra, and Ultimate. The best part of the first two is that they have to fall before a specific period of time. The Daily jackpot has to fall at a certain point of the day, the Extra jackpot also has to fall after a period of time, but every player will be looking to land the Ultimate jackpot, which offers the highest payout.