The Icy Gems slot makes its way to your favourite online casino thanks to a collaboration between Just For The Win and Microgaming. You could say this is a slot themed loosely on the concept of winter. Looking at the game, though, there really isn’t very much ice to it. The backdrop has some snowflakes, but that’s about it. There are, however, plenty of gems.

Payouts can be generous, but the slot volatility on this one seems to be quite high. The highest regular payout for five of a kind is 50 times your bet for landing five of the Icy Gems logo symbols. There are a couple of bonus features on this slot, but it could use more.

This is a five-reel, three-row slot with 20 fixed pay lines. Making your bet couldn’t be any easier. There are several options between £.10 and £100.00 per spin to choose from.

Sadly, this slot is nothing more than a repackaging, or re-skinning if you like, of a prior release from Just For The Win and Microgaming — and it’s not the first time they’ve done this. Icy Gems is, quite literally, the exact same game as the recently released Reel Talent video slot. The symbols are different and the visual design is redone — badly — but the game mechanics are identical.

Yes – Why To Play The Icy Gems Slot

Unfortunately, there aren’t a lot of bonus features in Icy Gems. What you get are wild symbols, re-spins, and super spins which are triggered by stored symbols. The two features are triggered as follows. 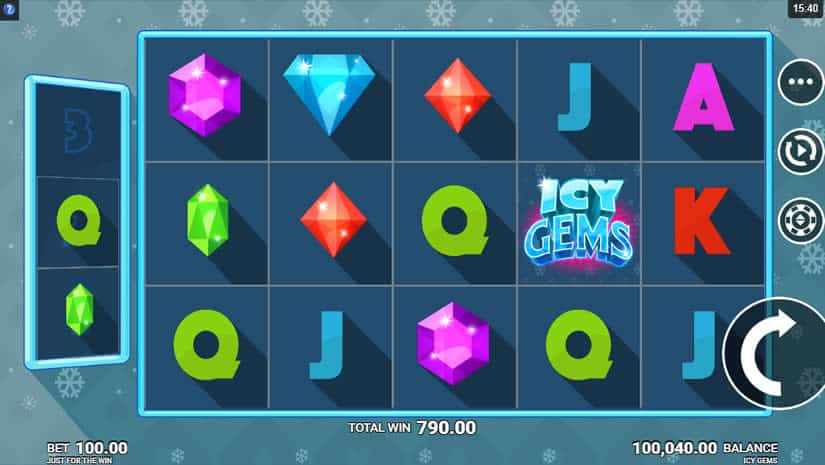 As mentioned above, this slot machine doesn’t offer much. Knowing these 2 companies – Microgaming and JFTW – such basic release comes as a surprise. It’s not that I wouldn’t recommend you to try it, but there are many other new tittles out there to try, if you are into gems and magical items: