The Strolling Staxx: Cubic Fruits slot is a new release from NetEnt that puts more than one interesting twist on the idea of a classic fruit machine slot. As you might expect from a video slot based on fruit symbols, there are a lot of bright, lively colours that really light up the screen. Both the symbols and the background are light, but there’s nothing too overwhelming that will irritate your eyes.

Strolling Staxx is a five-reel, three-row slot that plays on 10 fixed pay lines. There are ten different symbols on the reels including one wild symbol, five different fruits, and the playing card values jack, queen, king, and ace. In a strange sort of twist that is hinted at in the name, all of the symbols have a cubic shape. So, you’ll be spinning delicious looking, square-shaped strawberries, watermelons, lemons, and more. The highest possible single line win of 500 coins is paid for five wild symbols. The highest possible overall win on this one is 50,000 coins.

As far as wagers go, players can set both the coin value plus the number of coins to play on each line. There is also a “bonus bet” option that works as if you were playing on 15 lines instead of ten in exchange for a chance at some bigger wins when the special Strolling Staxx Respins feature is activated. The minimum coin value on this slot is £.01 and the maximum is £2.00 and it’s possible to play between one and ten coins on each bet line. The minimum overall bet, therefore, is just £.10 per spin with the maximum reaching £200, or £300 with the bonus bet feature activated.

Yes – Why To Play The Strolling Staxx Slot

As was stated above, the only real bonus feature in this slot is the Strolling Staxx Respins feature. This feature, however, can lead to some very generous wins when it retriggers or combines with colossal symbols on the reels.

Colossal symbols are more or less what they sound like. Any of the symbols in the game can appear as large 2×3 or 3×3 symbols. They can appear anywhere on the reels in both the base game and when the Strolling Staxx feature is active.

Although it’s not quite a bonus feature since you are paying for it, there is also an extra chance to get stacked symbols on the reels during respins if you have the bonus bet function enabled. When the Strolling Staxx respins are activated, but not by a 3×3 colossal symbol, an overlaid colossal symbol will spin over the reels and can fully or partially cover three reels to generate large winning combinations. 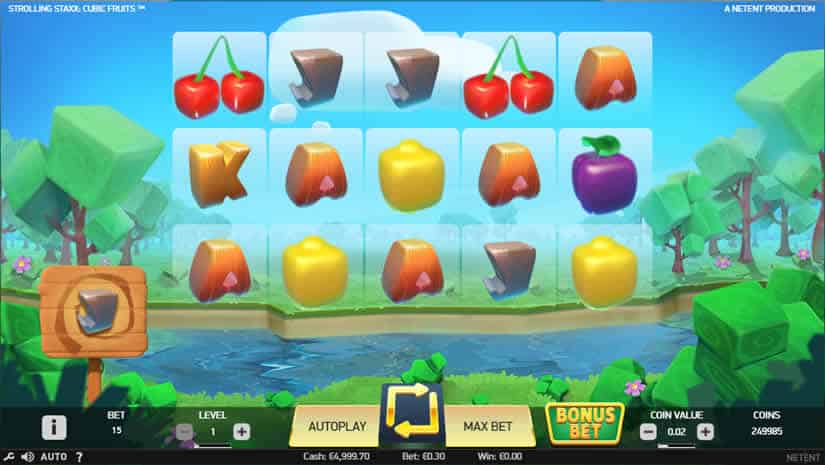 NetEnt works under strict regulation, therefore you will find Strolling Staxx slot and other tittles at regulated gambling markets. This definitely excludes USA and Australia, so if you are located there please visit the following sections:

In terms of Strolling Staxx slot, it is fun to play but may lack more visual effects. If you are into thrilling slot machines, check these hot picks!