Tiger Rush slot is a colourful, high-definition video slot for both desktop and mobile devices brought to us by Thunderkick. The game doesn’t have quite the amount of tigers that one might expect from a game called Tiger Rush, but the basic jungle theme of this slot is a minimalist design, very well done, and created with great detail in all of the elements. One of the hallmarks of a Thunderkick slot is the incorporation of varied bonus features, and this one doesn’t let us down.

The Tiger Rush slot is a five-reel, three-row slot at its base, but that changes during free spins. During the main game, bets are made and wins are paid across 10 pay lines, but again, this changes to 25 pay lines during free spins. Also of interest on this slot is the fact that all pay lines in both modes pay both ways — wins count starting from the left or from the right.

There are seven regular symbols on the reels plus a wild and a scatter symbol. The great tiger, drawn with an oriental flair, is the wild symbol and the game logo serves as the scatter symbol. The remaining symbols are various coloured gemstone carvings. Wild symbols only appear on the middle reels, so it is impossible to get five of a kind on those. The highest paying symbol will award 15 times your bet for five of a kind while the lowest paying offers 1.4 times the bet for a line of five.

Wagering on the Tiger Rush slot is very simple and straightforward. There are no coin values or coins per line settings at all. You’ll simply be presented with 14 preset bet amounts to choose from. The minimum wager per spin is just £.10 and the maximum, for those willing to take the risk, is £100.

Yes – Why To Play The Tiger Rush Slot

Tiger Rush has an interesting combination of bonus features that work together to create plenty of free spin opportunities as well as increasing the number of possible winning combinations. Everything, as you might expect, starts with the wild and scatter symbols.

The wild symbols themselves do more than just create extra matches when they land on the reels. Any wild symbol that stops in view will expand to cover the entire reel. So, in essence, every wild symbol will become three. In addition, whenever a wild symbol lands, there will be a free respin. The respin will occur regardless of whether the initial spin was a win or a loss, so it’s possible to win twice on one spin. Then, if you happen to land a second wild on the respin, you’ll be granted a third, allowing you to win up to three times.

Free spins can be triggered in two different ways and offer their own set of bankroll boosting features as well. Landing two scatter symbols will award free spins, but it’s also possible to trigger them by landing just one scatter symbol if one or more wild symbols appear adjacent to it. The total number of free spins granted will depend on the exact combination of symbols that trigger the feature. 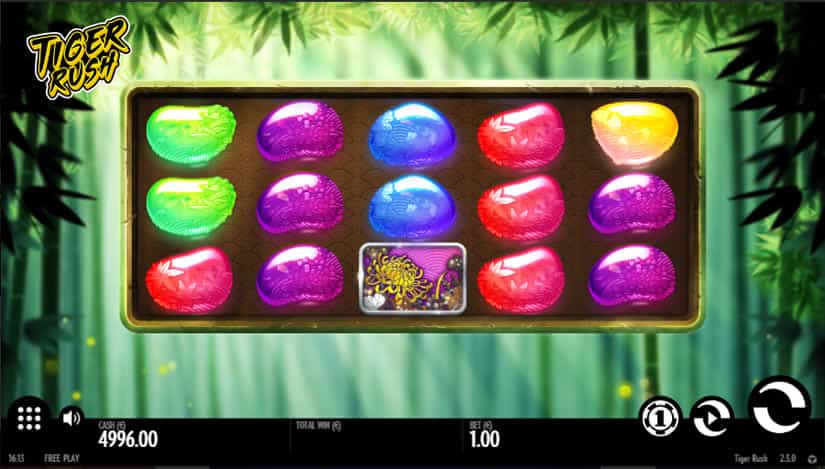 The Tiger Rush slot belongs to the Thunderkick slot library, which can be found at most multiplatform online casinos. As the name indicates, this type of online casino works with multiple softwares, so their library is robust and offers thousands of games.

I personally like slots with more graphic effects, so this one falls short on the type of animations I like. Here are some of the best tittles I played recently, with better effects and reasonable RTP:

By the way, Thunderkick is not available to all players. You can find this software at most UK online casinos, but you won’t find it – for example – at USA casino brands.