The Vikings Unleashed slot comes to us from Blueprint Gaming. Although some aspects of this video slot are not quite as polished as games you’ll see from other game designers, this one is a solid release with both pleasing visuals, music and sound. It also has the potential for some very large payouts.

As you should be able to tell from the name, this slot is following what seems to be a recent trend in Viking-themed slots. Obviously not wanting to be taken too seriously, though, the cartoon Viking characters on the reels here are more comical than fearsome by far. Among the symbols gracing the reels on this one are three Vikings, a wizard, and playing card values 9, 10, J, Q, K, and A. One would think there would be more Vikings on a slot called “Vikings Unleashed” but alas, the mighty Vikings are outnumbered here.

The Vikings Unleashed slot makes use of the MegaWays win and payout system, which can be a little bit confusing for novice players. All together there are 7 reels on this slot with 6 being vertical and one running horizontal across the top. The horizontal reel spins from right to left and always has four symbols that sit above vertical reels two through five. The number of symbols on the vertical reels can vary from two up to seven on each reel. Depending on how many symbols appear on each of the reels, each spin will have a different number of possible ways to win. The maximum, if all six reels stop with seven symbols, is 117,649 ways to win.

Wins are awarded when the same symbol appears on two or more adjacent reels. Symbols don’t need to line up on any specific pay line, they only need to appear on reels next to each other starting from the first reel on the left. In addition, on every winning spin, the winning symbols will be removed from the reels and new symbols will cascade down onto the playfield from above, creating chances for a higher payout on each win. If a second win occurs, those symbols will be removed and more will fall, and so on until no more wins are created.

Betting options on Vikings Unleashed are straightforward and a bit conservative. You’ll only need to choose your overall stake for each spin and you’re all set. The minimum wager per spin is £.20 and the maximum tops out at £10.00.

Yes – Why To Play The Vikings Unleashed Slot 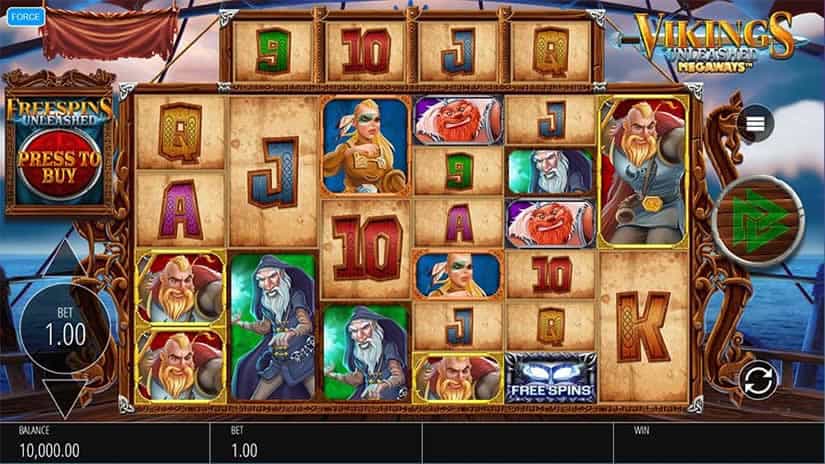 There are a few different combinations of features on this slot that can help boost wins, but it seems fairly obvious that the makers intended for the MegaWays feature to pretty much carry this game and they didn’t put a lot of thought into entertaining bonus features. Here’s how the bonus features break down.

In addition to the wild symbols, there are also hammer symbols that can appear on the reels. When the hammers stop, they will all transform into the same random symbol. So, obviously, the more hammer symbols that land, the better your chances of hitting a big win.

Free spins are triggered by landing four scatter symbols, which seems to be very difficult to do. Four symbols will start you off with 12 free spins and then each additional scatter symbol will add five free spins on top of that. When you manage to trigger free spins, you can also gamble both the number of free spins and the win multiplier to be used. If you win, obviously, you get more and if you lose, the bonus feature ends.

This is an amazing slot machine which I really enjoyed playing. You can find it at most UK online casinos, that are also available to other European players. If you are like me, enjoying Viking themed slots, feel free to check the following tittles: